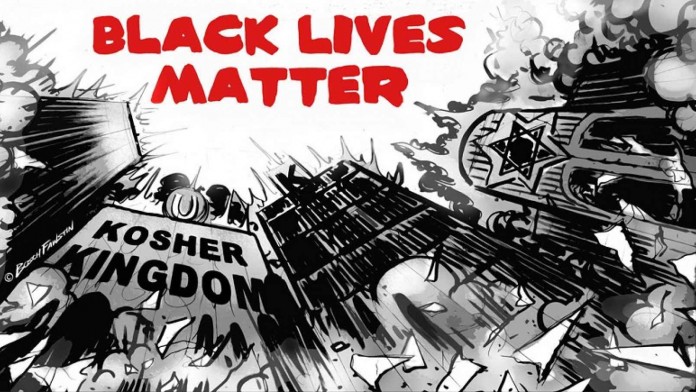 “It’s no coincidence that the riots here escalated in Fairfax, the icon of the Jewish community. I saw the Watts and the Rodney King riots. They never touched a synagogue or house of prayer. The graffiti showed blatant antisemitism. It’s Kristallnacht all over again,” Rabbi Shimon Raichik, a Chabad Rabbi in Los Angeles, wrote.


These scenes from what the media has falsely called peaceful protests and the Jewish community in the Fairfax neighborhood of Los Angeles has called the Shavuot Riots, after the biblical holiday during which the worst of the attacks on the community occurred, has fundamentally divided Los Angeles Jews.

Allyson Rowen Taylor, the former Associate Director of the American Jewish Congress in LA, and a co-founder of StandWithUs, passed on an account of hearing chants of, “F___ the police and kill the Jews.”

“The antisemitic chants are not being widely reported.  This is insane and very, very scary,” she noted.

After the conclusion of Shavuot and the Shabbat, members of the Jewish community went to pick up the pieces, battling looters and checking out the damage. Even synagogues that had been untouched began evacuating their Torah scrolls to places of safety, unprecedented outside of a major natural disaster.

Aryeh Rosenfeld, an Orthodox Jewish small business owner in the area, described to the Jerusalem Post hearing screams of, “F___ Jews” during the riots and looting as he tried to protect his store.

The looting not only devastated countless small businesses in the area, but graffiti, some of it explicitly anti-Semitic, was scrawled across at least 5 Orthodox Jewish synagogues and 3 religious schools.

“The attack on our community last night was vicious and criminal. Fairfax is the center of the oldest Jewish community in Los Angeles,” Councilman Paul Koretz said. “As we watched the fires and looting, what didn’t get covered were the anti-Semitic hate crimes and incidents.”

Melina Abdullah, the lead organizer of Black Lives Matter in LA and a professor of Pan-African Studies at Cal State, had been very clear about her motive for bringing her hateful campaign to the area.

“We’ve been very deliberate in saying that the violence and pain and hurt that’s experienced on a daily basis by black folks at the hands of a repressive system should also be visited upon, to a degree, to those who think that they can just retreat to white affluence,” the BLM-LA co-founder ranted.

Melina Abdullah has a hateful record of appearing at Farrakhan and Nation of Islam events and praising the antisemitic hate group and its leader. When Facebook decided to remove Farrakhan over his hateful rhetoric toward Jews, the Black Lives Matter LA co-founder came to his defense.

“Facebook and Instagram’s decision to ban The Honorable Minister Farrakhan along with known white-supremacists represents the ultimate in false equivalencies,” Abdullah complained. “As a Black community, we should be very wary when others attempt to silence our leaders. We should also think about how to organize beyond social media. I continue to appreciate the Minister’s fearless leadership and intense love for our people.”

Farrakhan has praised Hitler, compared Jews to termites, and had declared, “Those who call themselves ‘Jews,’ who are not really Jews, but are in fact Satan”, claimed, “Hitler was trying to destroy the international bankers controlling Europe”, and boasted, “there has not been a black leader in America locked in a struggle with the Jewish community, but Louis Farrakhan.”

And Abdullah has made no secret of sharing Farrakhan’s hostility toward Jews.

When CNN parted ways with Marc Lamont Hill after he once again endorsed the murder of Jews, Abdullah accused CNN of standing “with a Zionist Israel that murders and terrorizes the Palestinian people.” The BLM-LA leader had complained that the Women’s March included “Zionists”.

At the Women’s March, Thandiwe Abdullah, her daughter, now the co-founder of the BLM Youth Vanguard, had said that as a “black Muslim girl, it is very important to me that Black Lives Matter also values the lives of the Muslim women in Palestine” and accused Israel of “genocide”.

The media not only failed to report the scale of vandalism against Jewish synagogues and schools, but treated it as a mysterious aberration while failing to report that BLM LA’s lead organizer had a history of anti-Semitism, and that BLM-LA had allied with one of the most vicious anti-Semitic hate groups around.

It did not note her own statement that “violence and pain and hurt” should also be “visited” on the people living and working in an area which included one of LA’s major Jewish communities.

The media repeatedly described Abdullah as an activist against police violence while ignoring her affinity for a racist black supremacist hate group whose leader has described Jews as satanic and subhuman.

The level of duplicity and malpractice by the media which covered this up is its own hate crime.

Imagine if a rally by a supporter of the KKK had turned into attacks on black churches and stores. The media would not be pretending that the two events were somehow separate and unrelated.

The national media, the local media, and even the local Jewish media failed to cover these facts.

In the aftermath of the Black Lives Matter riots, Los Angeles Jews, like millions of other Americans, found themselves deeply divided between standing with the rioters or their victims. And that unfortunately included some in the Modern Orthodox Jewish community.

After the attacks on synagogues in Fairfax, the major Modern Orthodox synagogues in nearby Beverlywood, the more modern counterpart of the community, conducted Black Lives Matter sessions. Even though these same synagogues had to rush out their Torah scrolls to protect them from a racist mob, they did not voice any pain or outrage, or offer solidarity to their fellow vandalized synagogues.

Unlike the statements by Young Israel and the Agudah, the Orthodox Union failed to even address the attacks on synagogues. Local leaders urged Orthodox Jews, who were the victims of the racist violence, to atone for their imaginary crimes of racism and to take up the hateful slogan of Black Lives Matter.

On a street in Beverlywood, high school kids from one of the more liberal schools in the area chalked slogans denouncing “white silence” and the same police who keep the mansions of their parents safe.

In Fairfax, the more traditional Orthodox Jews, in black pants and white shirts, in dangling tzitzit and black hats, had cheered the LAPD and other law enforcement agencies as they rolled in after the pogrom, and Persian Jews handed out donuts and snacks to the members of the National Guard.

There is an unbridgeable moral gap between the Chabad synagogue that opened its doors to the National Guard and the Modern Orthodox synagogues that opened their doors to black nationalists. And that gap in the Orthodox community can be seen in those teens cheering the LAPD in Fairfax and those chalking slogans against it in Beverlywood. That gap will determine which community has a future.

A community that teaches its children that they are privileged racists and that standing up for Israel and for their own homes and synagogues has to take a back seat to black nationalism, has no future.

As Rabbi Pini Dunner, of the Young Israel of North Beverly Hills, wrote, “If supporting BLM means collective suicide, you can count me out.”

Those Jews who have had the courage to speak up have been told that now is not a Jewish moment. This is a time for empathizing with criminals, not for standing up for the victims of anti-Semitism.

Jay Sanderson, the president of the Jewish Federation of Greater Los Angeles, worried that focusing on the attacks on synagogues would detract from the important cause of the protests.

“This is not about us,” Los Angeles Jews have been told.

And yet the vandalism of synagogues and businesses, the cries of, “F___ Jews”, and the “F___ Israel” graffiti on a synagogue eloquently testify to the inescapable truth of anti-Semitism that it is about Jews.

And if Jews don’t stand up when their synagogues and stores are attacked, who will?

Paint can be cleaned off, glass can be swept away, and family savings and dreams can be put away, but there is a bigger price to be paid for failing to stand up to the rise of someone like Melina Abdullah. Bigoted mobs don’t go away when you fail to stand up to them. They gain power and legitimacy. And the price of standing up to them grows while the toll they take with each attack becomes unbearable.

The true moral cost of the Los Angeles Pogrom can be measured in the fact that racists were able to get away with attacking synagogues while intimidating some Jews into keeping quiet and supporting them.