That Ocasio-Cortez diluted the significance of the Holocaust is obvious. What isn’t obvious is the logic behind the reactions of leading Jewish politicians Rep. Jerry Nadler and Senator Chuck Schumer. Their fulsome support for her facile word game and/or detachment from the entire issue do not augur well for stemming the now steady march toward trivialization of all things sacred to Jews. And the lack of concern by such senior Jewish-American elected officials cannot but send a message to others.


Nadler certainly knows what’s at stake, but seems overtaken by his hatred of President Trump, reflexively seizing on anything that may paint him in a harsh light. Meanwhile, Schumer – who, in a play on his name, often refers to himself as the “shomer” (watchman) of the Jewish people – apparently doesn’t want to say anything that may weaken his prospects of one day becoming Majority Leader of the United States Senate.

AOC’s absurd and insensitive remarks, however, make these politicians’ failure to defend us alarming. She said:

It’s pure sophistry to argue that describing U.S. border facilities as concentration camps is justified because “concentration camps” may have been employed pre-Holocaust to describe mass detention facilities. Surely even AOC must appreciate that since the Holocaust, at the very least, “concentration camp” has been identified with systematic mass murder and incomprehensible brutality.

Her strained use of the term, then, had to have been calculated to provoke and draw attention to herself – at our expense. Yet Nadler ignored this obvious point and said, rather disingenuously, we think, “One of the lessons from the Holocaust is ‘Never Again’ – not only to mass murder, but also to the dehumanization of people, violations of basic rights, and assaults on our common morality. We fail to learn that lesson when we don’t call out such humanity in front of us.”

But who was suggesting that President Trump couldn’t be criticized for his policies? Ocasio-Cortez’s malfeasance lies, not in criticizing Trump, but in the subliminal muting of what was done to the Jewish people at places like Auschwitz.

As for Schumer: Sadly, as noted, he has not been heard from. To be sure, he is a member of the Senate and not the House where Ocasio-Cortez sits. But as someone who could make a difference, his silence is of a piece with Nadler’s prevarications. Come election time, both should be reminded of their failure to step up to the plate. 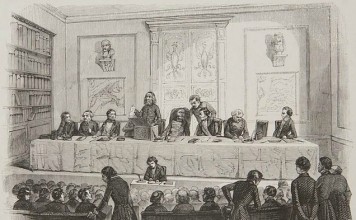