A statistic we saw about a spike in NYPD retirement filings in the month following the death of George Floyd on May 25 got us thinking that the current “defund the police” movement it spawned is not merely food for philosophical or academic debate over racism and the excesses of the hard left.

That 272 police officers put in retirement papers – as opposed to the 183 who did so during the same period last year – suggests a looming crisis in real time for the department.


So it’s time for New Yorkers to acknowledge the critical job the NYPD does for all residents as we go forward seeking a solution.

As never before, officers are being subjected to verbal and physical abuse on duty and are disrespected by a mayor and City Council that have largely bought into the notion that the NYPD is an inherently racist group. The $1 billion budget cut – with several on the Council screaming for more – wasn’t exactly a vote of confidence in the work of the NYPD, and morale is said to be at its lowest ebb in years.

In addition, the slash will necessarily result in an estimated 1,163 reduction in the ranks. In light of all of this, a significant drop in the force’s overall effectiveness and in the public safety is surely coming.

How making New Yorkers less safe and more vulnerable to criminals makes New Yorkers safer from crime and racism eludes us. Plainly, we all have an interest in a properly functioning police force.

In recent years, crime in New York City has been reduced in almost spectacular fashion beginning in the Giuliani years with the anti-crime innovations of police commissioners Bratton, Kerik and Safir. By the time his successor, Michael Blomberg, left office, we had gone from 2,000 homicides a year (early 1990s) to fewer than 300! Most of the lives saved were minority lives.

But concern over certain law enforcement policies forced the NYPD to abandon them – rightly or wrongly – and an uptick in crime followed. Most recently, a reform of the bail laws resulted in many criminals being put back on the streets within hours of their arrest; police officials now speak of a law enforcement being in free fall. That has to be acknowledged if we are to move forward.

The irony of all of this is that countless New Yorkers are alive today because of the dedication of police officers over the last quarter of a century. Same for the periodic economic booms made possible by enormous gains in public safety. And studies show that the NYPD uses force less often than any other major city police department and has spent considerable time on de-escalation training.

It is counterintuitive to suggest that public safety does not depend on an effective police force. Indeed, for all of their demonstrating, we don’t believe that the “defunder” crowd – save for the irredeemable revolutionaries among them – really want to see an ineffective New York City police force. Even the protesters saw up close what out-of-control rioters are capable of and the threats they pose when police are ordered to stand down.

Hopefully, the current aggressions by the hard left to weaken the police will soon be spent and there will be an appreciation of the police so that we can pursue reform in a realistic context. Of course, that presupposes that weak politicians will stop being intimidated by the volume of its rage – quite a leap.

As a start, we think it’s time to acknowledge the key role of the NYPD. So, thank you, NYPD. The Jewish community appreciates your work.

The Jewish Press shares with its readers a lyrical tribute to police officers delivered a half-century ago by famed radio personality Paul Harvey, whose father was a cop who was killed in the line of duty:

A policeman is a composite of what all men are, I guess – a mingling of saint and sinner, dust and deity.

Culled statistics…underscore instances of dishonesty and brutality because they are news. What that really means is that they are exceptional, they are unusual, they are not commonplace.

Buried under the froth is the fact, and the fact is that less than one-half of one percent of policemen misfit the uniform. And that is a better average than you’d find among clergymen.

What is a policeman? He of all men is at once the most needed and the most wanted – a strangely nameless creature who is “Sir” to his face and “pig,” or worse, behind his back.

He must be such a diplomat that he can settle differences between individuals so that each will think he won. But, if a policeman is neat, he’s conceited; if he’s careless, he’s a bum. If he’s pleasant, he’s a flirt; if he’s not, he’s a grouch.

He must make instant decisions which would require months for a lawyer. But, if he hurries, he’s careless; if he is deliberate, he’s lazy.

He must be first to an accident, infallible with the diagnosis. He must be able to start breathing, stop bleeding, tie splints and, above all, be sure the victim goes home without a limp or expect to be sued.

The police officer must know every gun, draw on the run, and hit where it doesn’t hurt. He must be able to whip two men twice his size and half his age without damaging his uniform and without being brutal.

A policeman must know everything – and not tell. He must know where all the sin is – and not partake.

The policeman must chase bum leads to a dead-end, stake out 10 nights to tag one witness who saw it happen but refuses to remember.

He runs files and writes reports until his eyes ache to build a case against some felon who will get dealed out by a shameless shamus or an honorable who isn’t honorable.

The policeman must be a minister, a social worker, a diplomat, a tough guy, and a gentleman. 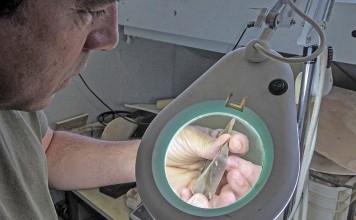