I concluded my long series of lectures with an English-language lecture on Parshas Bereshis at HaZvi Yisrael. Most shiurim, sermons, and even announcements at this shul are delivered in Hebrew, but there is a regular lecture for “Anglos” after Mussaf every Shabbos. I agree to deliver these lectures as frequently as I can, as an expression of gratitude to this remarkably welcoming and spiritually uplifting shul and its distinguished rabbi, Rav Avigdor Burstein.

The theme of this lecture was prompted by a book I have been reading by Sarah Friedland Ben Arza, a Jerusalem resident and scholar of linguistics, titled “Yehi”: Milim K’Maasim (or “Let There Be”: Words as Deeds). Her thesis is that words create new realities. I presented her thesis and expounded upon it, referring to the first Mishnah of the fifth perek of Pirkei Avos, “By ten acts of speech was the world created.” I referred to a quite original commentary on this Mishnah to be found at the very end of the volume of the Vilna Mishnayos which contains Avos. It was written by Rav Baruch Lifshitz, the son of the author of the much more widely known Tiferes Yisrael. Rav Lifshitz speaks of a gradual evolutionary process, initiated by the Almighty, which is an omnipresent feature of the universe. His commentary is entitled Misgeres Zahav, and I recommend it.

Immediately following the chagim, I paid a shiva call on Rabbi Yehuda and Rebbetzin Chana Henkin in their home in the Kiryat Moshe neighborhood of Jerusalem. They are the parents of the murdered Rabbi Eitam Henkin and in-laws of Naama. I had met Rabbi Yehuda several times over the years and am familiar with his writings and teachings. I have worked very closely with Rebbetzin Chana, who is the dynamic founder of Nishmat and the inspiring teacher of that admirable group of women whom she trains to become yo’atzot halacha. Seeing them sitting bereft upon mourners’ chairs was quite an emotional experience. Rebbetzin Chana recognized me by name as soon as I entered the room and motioned to me to visit Rabbi Yehuda first (as he was seated in another section of the apartment).

I visited the Henkins as part of an Orthodox Union delegation led by Executive Vice President Allen Fagin; OU Israel Director-General Rabbi Avi Berman; and Mr. Norman Schmutter, a good friend with whom I have worked on OU activities. I introduced myself to Rabbi Yehuda as representing the entire Orthodox Union and its many synagogues and that, in a sense, I was delivering condolences to him from the entire American Jewish community. I said that we all shared his pain and were saddened by the loss of his multi-talented son. I mentioned that I was familiar with several of his son’s Torah essays and thus felt that I shared in his loss.

Rabbi Yehuda responded, “If you didn’t know him personally, it is impossible for you to fully appreciate his loss.” I heartily agreed.

Our small delegation then proceeded to offer condolences, again on behalf of the Orthodox Union and its constituency, to Rebbetzin Henkin. She expressed her deep gratitude for our visit.

The Henkins’ modest apartment overflowed with menachamim, comforters, including leaders of the political left and right, prestigious rabbis and scholars, and numerous students of the murder victims. Prominently present were leaders of the Israeli Druze community, including the father of murdered Druze policeman Zidan Sayif (who was killed trying to rescue the victims of the Har Nof Massacre).

Several times after Yom Tov, as a demonstration of our personal commitment to remain undaunted by terror, Chavi and I walked to the Kotel, where reinforced security measures are apparent. 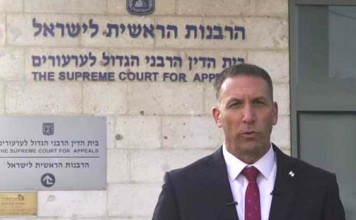