In Israel, everyone is asking the same question: How will the new elections be any different than the previous ones? After all, the players are the same and the issues are the same.

In the hope of gaining some insight, The Jewish Press recently spoke to Baruch Marzel of the Otzma Yehudit Party.

Bibi is a clever politician. Didn’t he know Lieberman was plotting a political putsch?

Everyone knows that to form a government you have to play give-and-take. Lieberman broke the rules of the game, and, given the make-up of the coalition partners and their demands, Netanyahu didn’t have any way out.

Is Lieberman a diehard rightist like he claims to be?

We’ve known Lieberman for a long time – ever since he was Netanyahu’s right-hand man in surrendering Hevron to the Arabs. We appealed to him to meet with us – the Jewish community leaders in Hevron – and he turned a deaf ear.

How will the next election results be any different than the last ones? We can arrive at the same stalemate, sending the country to round three.

Otzma Yehudit is going to send our many Russian supporters into the Russian communities to attract new voters. I am sure Likud is going to do the same. They have several MKs who speak Russian, but, until now, they left Lieberman’s territory to him alone, believing his party would remain faithful to Netanyahu.

Every party on the right is going to concentrate on pulling votes away from Lieberman; I wouldn’t be surprised if he didn’t pass the voter threshold this time around.

According to a recent poll, Lieberman will win eight Knesset seats.

Polls are fake. According to the polls, Feiglin and Bennett were supposed to win the sweepstakes in the last elections, but they were left with their mouths wide open.

What are the chances that all of the small right-wing parties, including those of Feiglin and Bennett, will unite?

That would be the best possibility. Otzma Yehudit would back a technical bloc like that, with each party going its own way once a government is formed.

Prime Minister Netanyahu claims the smaller parties weaken his chances of forming a stable government, and that people should vote for Likud lest the left come to power.

Without a strong rightist bloc behind him in the coalition, you end up with the same Netanyahu who gave away Hevron, voted for the evacuation of Gush Katif, frees terrorist killers, allows Jews in the south of Israel to live under constant siege, and funnels billions to Hamas and the Palestinian Authority, enabling them to continue slaughtering Jews.

On Thursday, a gay pride parade is being held in Jerusalem. Will Otzma Yehudit protest the parade with a counter-parade of mules as it did in the past?

The Agriculture Department won’t let us bring mules into the city, but we will protest the Chillul Hashem and public disgrace to our Holy City.

That is another reason why Otzma Yehudit is so needed. Everyone else – Bennett, Feiglin, Jewish Home, and Likud – are all wishy-washy on this issue. For us, the LGBT movement is another form of terror that must be combated with all the democratic means at our disposal for the well-being of Am Yisrael. 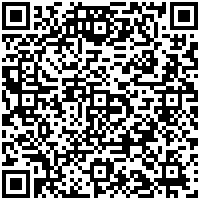