Imagine leaving CNN for Breitbart. That’s essentially what Melanie Phillips did in England 25 years ago. Today one of the most prominent conservative voices in England, Phillips spent the early part of her career working at The Guardian, England’s equivalent of The New York Times.

“You have to understand that for me, at that time, working for The Guardian was like being in paradise,” she told The Jewish Press during a recent visit to the U.S. “It was civilized, and people were so intelligent, so thoughtful, so liberal, so tolerant – or so I thought…. It took me a very long time to free myself of that.”


Phillips is the author of 10 books, including the best-selling Londonistan: How Britain Is Creating a Terror State Within and, most recently, The Legacy and Guardian Angel: My Journey From Leftism to Sanity. She currently writes for The Times, The Jewish Chronicle, and The Jerusalem Post.

The Jewish Press: You write in your autobiography, Guardian Angel, that researching the state of British education led, in part, to your ideological transformation. How so?

Phillips: In 1987, I became an opinion columnist at The Guardian – I had previously been a reporter, an editorial writer, and the paper’s news editor – and one of the earliest columns I wrote was about education. I had two little children, and the schools I was looking at for them were not teaching very much. They were allowing children basically to play and muck around. So I wrote a column saying this.

And the world fell in on me overnight. I came in the next morning, and my colleagues at The Guardian said, “Have you gone mad?” And I was taken aback because all I had done was express an opinion. I was even more shocked by the reaction I got [from readers]. Letters poured in from the education establishment at every level, [declaring] that I was not only wrong but vicious, and there was nothing wrong with education except that teachers weren’t paid or valued enough.

At the same time, I got letters from parents and dissidents within the education system. The parents said – universally – “Thank goodness somebody has started telling the truth.” And the dissidents wrote to me in these terms: “You must never ever say who I am. I’m writing to you in conditions of great secrecy.” And then they would describe being threatened with being fired or demoted if they taught in accordance with what I had always thought was the purpose of education: to transmit a body of knowledge and a way of grappling with the world and exercising reason in an orderly and structured fashion.

Instead, the dominant view [had become] that children should basically teach themselves because what they brought to the classroom was infinitely superior to anything the adult world could give them and that, furthermore, transmitting Western culture was no longer permissible because the West was intrinsically racist, nationalist, and bad. It was actually an offense against the child to transmit that culture.

In other words, the education system was de-education. Instead of inducting the next generation into the cultural values, traditions, history, and understanding of the West so that those children could be Western people equipped to take their part in society, the education system had turned itself into a propaganda outfit designed to transform the West by capturing the minds of the children so that they would embody the antitheses of Western values.

Another topic that landed you in hot water at The Guardian was the breakdown of the family.

Yes, I discovered [several thinkers] saying that family breakdown was threatening to destabilize the West because it was encouraging mass fatherlessness. And I wrote that while family breakdown was inevitable in certain circumstances, it should be regarded – surely – as a tragedy for everybody involved and best avoided therefore if possible.

But out of nowhere, it seemed, a philosophy emerged which said women were better off without men – that they could do it all themselves and men were a waste of space. It seemed to me that this was a recipe for misery. Women, for example, are overwhelmingly far worse off in every respect – financially, emotionally, psychologically – when they are racketing around between transient men. And research shows that while children are sometimes better off if unhappy parents separated, the unhappiness of parents has to be very extreme before that is true.

What I observed, to my horror, though, was that this research was being shut down. The researchers who were finding this out had their grants cut off. Official statistics produced by the government which showed that it is something like 33 times more likely for children of unmarried parents to experience physical abuse than children whose parents are married vanished from the official records.

The information disappeared because nothing could be held to stop the great development of lifestyle choice – that everybody should be free to choose whatever household they want and nobody should say that any type of family arrangement is any better than any other.

You write that it took you a long time to allow yourself to adopt certain conservative ideas because to do so would mean you were a bad person in your own mind. Can you explain?

So consequently they have to be stopped. You can’t disagree because the program is perfection. It’s a completely closed thought system. So if somebody who’s not on the Left comes along and says, “I know you believe this, but here are some facts that show you’re wrong,” that person cannot possibly be correct. That person is right-wing, evil, and consequently anything he says must be a lie or wrong.

In a recent article you wrote that England is not safe for Jews anymore. Are matters that bad?

It’s a very personal thing. I don’t mean physically unsafe. I mean psychically unsafe. I’ve been made to feel that I’m tolerated only as long as I toe the line; that as soon as I put my head above the parapet as a Jew supporting Israel, I’m regarded as treacherous, as having dual loyalties – that was said to my face on national TV – and not properly British.

And in recent months a lot of other people have suddenly woken up to the open anti-Semitism [in British society]. I’m not talking about the kind of anti-Semitism which tries to hide behind deranged obsession or hatred of Israel, but traditional anti-Semitism which openly says the Jews are [involved in] a demonic conspiracy to run the world through the Rothschild family, Jewish bankers, and so on. A lot of British Jews are in a state of complete shock.

You write in that same article that if British Jews were honest, they wouldn’t be shocked. Why not?

The Palestinians produce propaganda every day, using Nazi cartoons, with which they brainwash their children about the “demonic Jews” and the Jewish a conspiracy against Islam and humanity. This is what the western left has been supporting for years – including the Jewish left. So suddenly they’re surprised?

Anti-Israelism is not simply criticism of Israel. It singles out Israel for treatment which is accorded to no other country on earth including the most terrible regimes. It’s based entirely on lies, misrepresenting the country which is the only beacon of human rights and democracy in the Middle East as being a rogue state committed to the extinction of democracy and human rights. Israel is regarded, just like in traditional anti-Semitism, as being a kind of cosmic evil. It’s given almost supernatural powers of evil. It’s considered to be leading a conspiracy stretching from Jerusalem to Washington to subvert the foreign policy of America against the interests of the rest of the world.

The Jewish community in Britain and elsewhere, however, has refused to understand that these two things are intrinsically linked. They’ve refused to process the fact that people who support the Palestinians are profound anti-Semites. 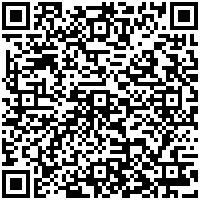