Who is Rabbi Wolowik? Perhaps most importantly, he is the husband of the woman who made my oldest son’s shidduch. More prosaically, he is the Chabad shliach of the Five Towns where he first met Ambassador Friedman over two decades ago. Last week, he graciously agreed to share some inside information with me on his experience at the embassy opening and the invocation he delivered.

Q: Why were you asked to give an invocation?

A: My guess is because Ambassador Friedman and I happen to be very close. Baruch Hashem, he has a deep respect for Chabad and we have been learning together on a regular weekly basis for 20 years. He is a dear friend, and I had the zechus to officiate at one of his sons’ weddings.

I was at his side during the whole election and at his hearings in Washington. I also had the zechus to kasher the kitchen of the ambassador’s residence in Herzliya when David moved there two years ago.

How did you first meet Ambassador Friedman?

It was a unique hashgacha pratis. About 22 years ago he called Chabad and asked if we could check the mezuzahs in his house.

President Trump apparently promised Friedman he would appoint him ambassador to Israel if he won the election. Politicians tend to say things of this nature to make people feel good. Were you surprised Trump actually kept his word?

Let me start by saying that I never endorse politicians. Am I surprised? No! Because Trump is not your typical individual. David was Trump’s attorney and a very close friend for many years. I remember hearing [David mentioning] Trump’s name many times. They have a very close friendship.

How did you decide what to say for your invocation at the embassy opening?

We are first and foremost chassidim, shluchim of the Rebbe, so when somebody asks us to speak at an event of this nature, the first thing we do is [look up relevant Torah thoughts] of the Rebbe. The Rebbe [stressed] that the Jewish people and Jerusalem are inseparable and that the walls of Yerushalayim are “unifying walls” within which every man, woman, and child became part of something greater than themselves.

The Rebbe also said that peace is a quintessential tenet of Judaism, but it is also the inseparable sister of truth.

How would you describe the atmosphere at the embassy opening?

It was electrifying, literally electrifying. There was an atmosphere of joy, happiness, pride, truth… There were Jews and non-Jews, people from all points on the political spectrum, Israelis, Americans – it was really a beautiful expression of unity. Even the Mincha before the event… you had constant minyanim – like a factory. We all felt this was history in the making.

Any specific stories about that day that come to mind?

David’s interviews and conversations are so clear. Recently on NPR, he quoted the Rashi on the first passuk in Bereishis, which states that Hashem foresaw that the nations would claim the Jews stole the land from them and, therefore, He reminded in the Torah us that He created the whole universe and bequeathed the Holy Land to the Jewish people. It was so beautiful to hear an ambassador say that with pride.

There is talk that Trump will soon be revealing a peace plan that undoubtedly will include Israel ceding land to the Arabs. Are you concerned?

I believe God runs the world and, like the Rebbe always quoted, “The eyes of God are upon [the Land of Israel] from the beginning of the year to the end of the year” [Devarim 11:12]. So I’m not concerned. 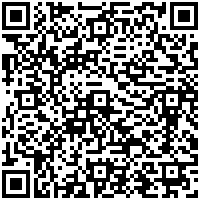