Hated for Our Torah

Helena Hawkins raises some valid points in her op-ed, “Why Nobody Likes The Jew” (De. 20th, Jewish Press). May I offer another view?

And the reason we have survived as a people is because we’ve accepted those laws upon ourselves. Everything else is commentary.

The Jewish people throughout history have identified as a unified culture in opposition to, and in conflict with, powerful tyrannies. The result has been suspicion, hostility, isolation, and abuse.

This animosity has been conditioned into the collective psyche of the nations for four millennia. But it has also been tempered with respect for, and recognition of, our strength.

Tragically, though, many Jews have mistaken this respect with encouragement to assimilate – which has had the effect of gasoline poured over glowing embers.

The only true way to combat anti-Semitism is to hold onto our glorious identity. While we gratefully contribute to our host cultures, we must always stay true to our ancient mission of opposing tyrannical injustice. We must remember our ancient G-dly heritage and who we are!

Anti-Semitism started with Moses in the desert. He taught the Jewish people that they were chosen by the Almighty to spread the Torah’s ethical wisdom to the rest of the world.

When we are called up to the Torah, we bless G-d “who has chosen us from all the peoples of the world.” Being chosen inspires feelings of jealousy on the part of those who aren’t.

Why Are Iowa and New Hampshire Always First?

Every four years since 1972, Iowa and New Hampshire have been the first two states to vote in the American presidential primaries. Isn’t it time for the other 48 states to have a turn?

We should reform the presidential primary process by instituting a schedule that gives every state the opportunity to be one of the first two states to vote in the presidential primaries every 100 years. This reform would bring a much-needed, overdue element of fairness to our primary system as it would give each state (no matter how sparsely populated) a period of political relevance.

I believe your readers will find the following information interesting:

Last week I received this notice from Facebook, “Your post goes against our Community Standards so only you can see it.” What was my objectionable post? A video from “Breaking Israel News, Israel365” entitled “Arab Christian Soldier in Israel.”

The video tells the story of Samer Barham, an Israeli-Arab Christian who voluntarily served in the Armored Corps of the IDF. It recounts some of his experiences as an Arab Christian in the IDF and the Jewish state.

The only “Community Standards” that I can imagine I broke were the standards of the anti-Israel and anti-Semitic communities. Hopefully Facebook will restore my post and review its banning policies.

We sometimes hear debate about whether the Torah’s account of the moon starting out as bright as the sun is literal or allegorical.

There’s a scientific discovery dating back to the 1969 Apollo 11 moon landing that, interestingly, sheds light on this question. Up until 1969, scientists thought the moon was always a “dead rock,” never having had any fire or light of its own. But the moon rocks brought back by the astronauts were made of igneous material, which means they could only have been formed by extreme heat. Scientists were shocked by this discovery.

Since then, the scientific consensus is that the moon was at one point probably ablaze with intense thermal activity; there’s even a possibility that some combustion is still going on today somewhere beneath its surface.

The Torah’s account of the moon’s history, therefore, seems very likely to be literal. The sun and moon look roughly the same size from earth, and if the moon radiated its own light, it could certainly, from Earth’s perspective, have had a similar appearance and effect as the sun.

President Trump’s executive order on anti-Semitism on college campuses is long overdue. Jewish students have suffered, not only from constant verbal harassment, but physical attacks too. California universities in particular have been infected by strident anti-Semitism despite state and national funding.

College should be for learning – not harassment, threats, or attacks.

My Memories of Jersey City

Jersey City, NJ, is part of my childhood. My hometown was Bayonne, NJ, and as a child I would travel daily to attend the Yeshiva of Hudson County (now renamed the Rosenbaum Yeshiva of North Jersey) aboard a bus that drove through Jersey City to pick up fellow schoolmates.

In addition, those wishing to go to New York City had to take a bus to Jersey City to pick up the Path train to the city. As a kid, I only experienced a safe Jersey City where people of every color, religion, and creed lived together in peace and harmony.

The slaughter two weeks ago was a gut punch. May Hashem have rachmanus on us and bring the geulah now!

Some Democrats were calling for President Trump’s impeachment before he even took office in 2017. One Democrat, Congresswoman Rashida Tlaib of Michigan, actually called for his impeachment hours after she was sworn in on January 4, 2019 – and used gutter language in front of her own children in doing so.

Democrats constantly changed their explanation for impeachment since they were all without merit. For a long time it was obstruction of justice. Then it was collusion with Russia. Then it was bribery, followed by extortion, followed by profiting from the presidency.

At long last they decided on “abuse of power” and “obstruction of Congress” – neither of which hold any water. The Democrats did not cite a single law that Trump broke when they impeached him.

After everything President Trump has done for Israel and the Jewish people in the U.S., I believe we must support him at this juncture.

Pray with me for President Trump. He is the best president we Jews and the state of Israel have ever had. 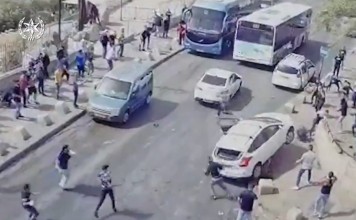