As he was coaching young Israeli high school players during an American football in Israel (AFI) scrimmage game at the Kraft Family Sports Campus this past Friday morning in Jerusalem—and with six New England Patriots gleaming NFL Championship Lombardi trophies on display—Super Bowl LIII MVP Julian Edelman paused to tell JNS that even though this was certainly not his first trip to Israel, “being in Jerusalem brings the chills out.”

He added, “This is the Holy Land for a reason. It’s the homeland.”


Edelman, who is known to proudly and very publically display his Jewish heritage and connection to Israel, was in the country alongside 15 other current Patriots players and alumni as part of “Touchdown in Israel III,” the third installment of a VIP trip to Israel for NFL players organized by Patriots chairman and CEO Robert Kraft. Over the years, Kraft has brought dozens of other NFL players from the various teams to Israel, including many Hall of Famers—some of the best to ever play the game.

Kraft was asked by JNS what it meant to be in Jerusalem after winning his sixth NFL championship. He said, “It’s the greatest feeling. I love the city of Jerusalem. I love sport of football and to be here with the trophies. It’s a chalom gadol, a ‘huge dream’ ” come true. 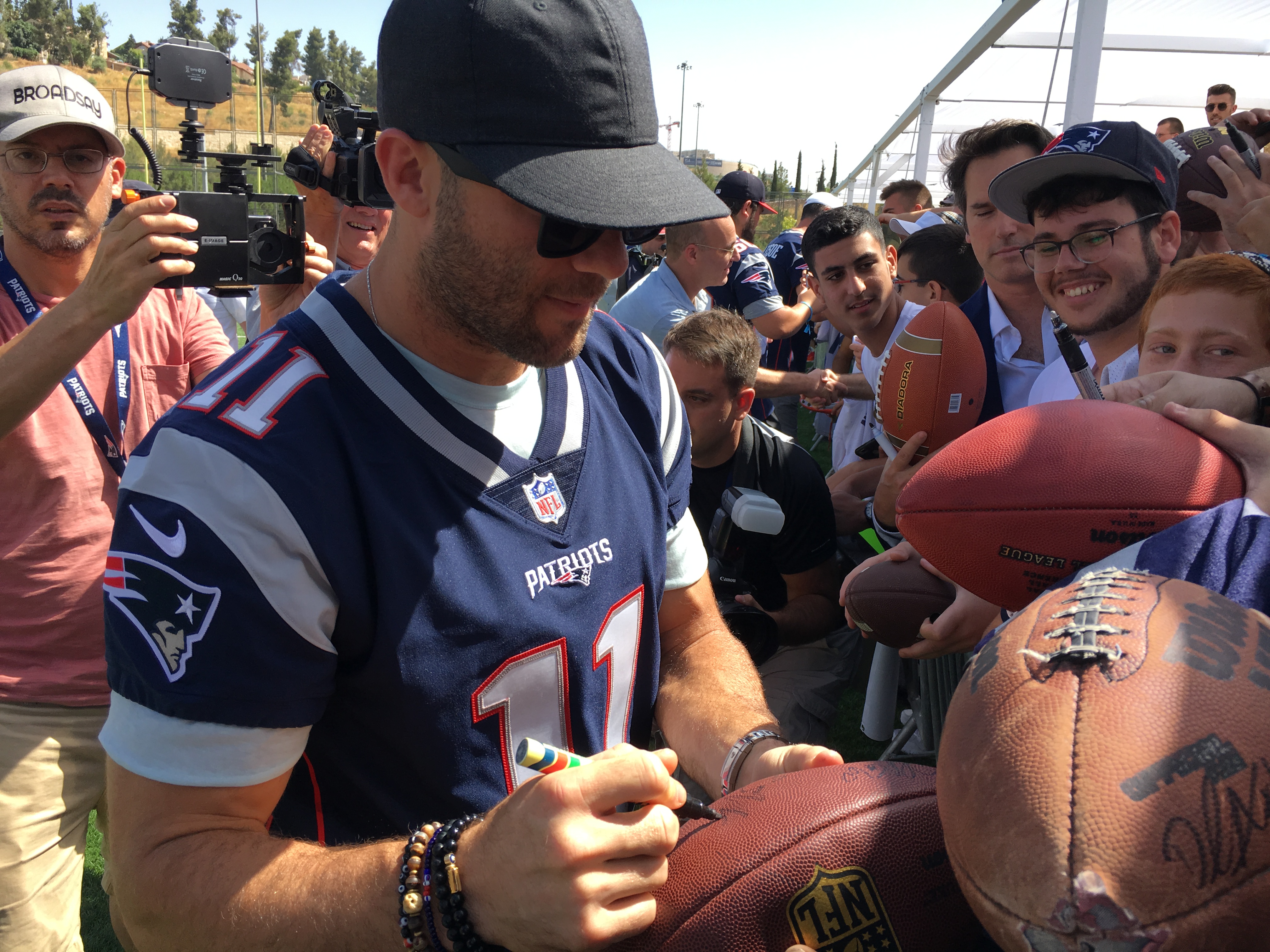 The night before the football event, with the Patriots players on hand, Kraft received the prestigious Genesis Prize, presented to him by Israeli Prime Minister Benjamin Netanyahu at a Jerusalem ceremony.

At the ceremony, Kraft announced that he was earmarking $20 million to establish a foundation dedicated to combating anti-Semitism and BDS.

During the Friday gathering at the sports campus, hundreds of Israeli NFL football fans, along with several hundred men’s, women’s and youth who play in the various AFI leagues, joined to welcome and get autographs from some of their favorite players while watching the high-schoolers in full pads strut their stuff on the what is Israel’s only full-sized regulation football field.

Danny Gewirtz, co-founder of the AFI, who started the league in 1988 with current AFI president Steve Leibowitz, told JNS that he is looking forward to Israel preparing to host 20 international teams this summer as part of the men’s and women’s European Flag Football Championships from Aug. 29-Sept. 1 at the Jerusalem sports campus.

In regard to “Touchdown in Israel III,” Gewirtz said “the bottom line is that it’s all about Robert Kraft. To see the players is nice, fun and exciting, but it’s he who unceremoniously and very modestly brings these players here to be ambassadors for Israel.

“These guys are very influential people,” he continued. “They go back and tell the thousands of people about their experience, and that’s what Robert Kraft does; he creates these ambassadors, and it’s multiplied a thousand-fold as they sing the praises of Israel.” 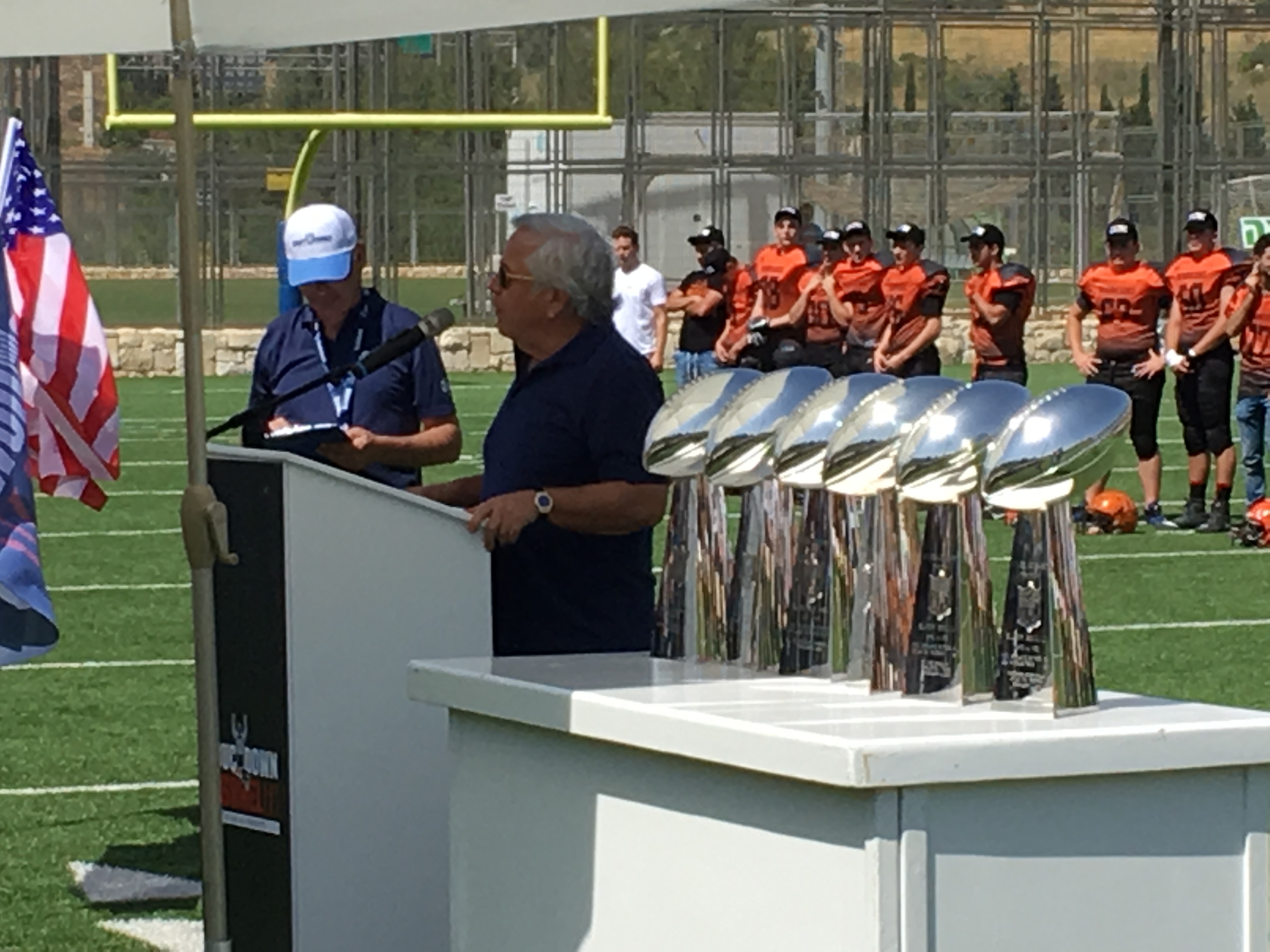 In his remarks to the crowd, Leibowitz focused on the impact the Kraft Family has had on football in Israel. “Twenty years, ago Robert and Myra Kraft came to Jerusalem for the dedication of Kraft Family Stadium. That moment changed our lives forever.”

He explained how the facility became the home of football in Israel, with the game spreading to communities all over the country.

Leibowitz added that “when this journey began, the Patriots had yet to win a Super Bowl, Now, they have six. That is the good fortune that can happen when you bring football to the Holy Land.”

Kraft has noted on more than one occasion publicly that it is no coincidence that the team’s success began when he started investing in Israeli football. Leibowitz said that it was the first time in history so many Lombardi trophies have left American soil, saying how honored he was that they were on display in Israel.

As Kraft said to the audience: “It gives me nachas [“joy”] to see so many young Israelis ready to go play the game that we love.”

Shana Sprung, who has been a star quarterback in the Women’s flag football league for the past 15 years and one of the captains of Israel’s Women’s National Team, told JNS that before 2004, she would come to watch her guy friends playing football. But thanks to the Krafts, the women’s league was founded, and the women’s national team is now ranked and competing against some of the best teams in the world.

Sprung attended the Genesis Prize award ceremony the previous evening, saying “it was a privilege to be at the event. For someone of that caliber to stand up publicly against BDS and anti-Semitism, there is no one better to do it, because yes, it’s the Patriots, its Robert Kraft, and he stands for what he believes in. He’s not afraid to say it, no matter the haters.”

Another one of the Patriots in Israel was nose tackle Vince Wilfork, who recently retired from the NFL after playing 11 seasons with the team (followed by two with the Houston Texans), and was a member of two Super Bowl-winning teams.

As he was getting ready to coach some of the high school players in their scrimmage, he told JNS that being in Israel was an opportunity to educate himself on many different religions. “To be able to come to see it all and be taught by those who have been here all their lives, it’s very special,” he said.

While firing passes to a friend on the sidelines of the high school game former longtime Patriots quarterback, Drew Bledsoe, in Israel for the first time, told JNS in one word that the trip was “enlightening.”

Bledsoe described how his experience in Israel was completely the opposite of what he thought he was going to get after hearing all the negative reports about Israel in the press.

“To see the way the country is portrayed in our media and internationally, and then actually be here and see how different it is from that portrayal, is amazing—amazing people, innovation. It’s such an amazing combination of brand-new and very old, and the soulful and spirituality here … I can’t wait to go back and tell people about it, and then bring my family here.”