Editor’s note: That many evangelical Christians in America enthusiastically support the Jewish state is fairly well-known in the Jewish community. Less well-known is the continued animosity toward Israel of several mainline Protestant Christian denominations. To help our readers distinguish friend from foe, we present this exclusive article by Rabbis Abraham Cooper and Yitzchok Adlerstein, who monitored last month’s The 79th General Convention of The Episcopal Church in Austin, Texas.


Just in case no one bothered, dear members of The Episcopal Church, we’re reaching out to thank you for giving us the resolve to go on. You see, the most potent weapon against the Jewish State is not a Hamas suicide belt or an Iranian missile. With the help of G-d and Israel’s army, we can deal with those. What really does the most harm is a hug – and you folks just gave us the antidote.

Beleaguered Jews are suckers for love. Lob missiles into our kindergartens, and we’ll fight back. But send some signal that you “might be ready” to live alongside us, and we melt. On the road to Oz, we bought into the Oslo Accords, and really wanted to believe that somehow the unilateral withdrawal from Gaza would help bring peace. In the end, both were catastrophic.

To your credit, your Church removed any veneer of objectivity or fairness from your General Convention, and zeroed right in on those pesky Zionists. We watched as you introduced a dozen resolutions hostile to the Jewish state, prompting one bishop to ask why Episcopalians were intent on “piling on” to Israel. We heard allegations that Israel incarcerates children for 10-20 years simply for throwing stones; that Israel suppresses peaceful protests in Gaza with lethal weapons.

We watched Bishop Gayle Harris from Boston as she lied through her teeth to defame the Jewish state. She claims she saw Israeli soldiers rush up the Temple Mount to try to handcuff a three-year old Palestinian boy whose ball had rolled away, and fallen to the Western Wall Plaza below, magically passing through the tall stone wall that prevents balls or anything else from rolling over the side.

Equally impossible was her story about a Palestinian teen who asked the wrong question of a few IDF soldiers, so they shot him four times – and then another six while he was down. Really? When? Where? When an older gentleman from Dallas rose to defend Israel, he was met with a torrent of tweets, mocking him.

We didn’t hear anyone challenge the bishop’s charges. No one mentioned that jail sentences for minors are for lethal and fatal damage – not throwing pebbles – and that literally dozens of Israelis have been killed by “rocks,” which often are bricks and boulders. (Both authors of this piece know – or knew – such victims.)

We didn’t hear anyone respond that the “peaceful demonstrators” at the Gaza fence were rioters who were instructed to rush it and, if they made it through, find Israeli civilians so they could “tear out their hearts from their bodies,” to quote Hamas leader Yehya al-Sinwar.

We didn’t hear anyone express concern over the missiles aimed at civilians in Israel. Could it be that those missiles didn’t kill enough Jews to elicit even some crocodile tears? How many short of another six million would it take?

We didn’t hear anyone express concern for the brutal occupation of Tibet by China, or the election in Pakistan that directly endangered the lives of 2.5 million fellow Christians there. (Both leading parties favored the “blasphemy laws” that fuel popular pogroms against Christians.) We only heard scorn and derision aimed at Israel.

Did anyone bother to ask: Why all the inordinate attention to Israel? How many stopped to consider that, if you add up all casualties on both sides over the last 70 years, the Israeli-Palestinian struggle ranks only 49th on the tragic list of world conflicts? Did anyone pause to consider the death toll over seven decades relative to that in Syria in one month? Or one week in the Congo? How much serious attention did you pay to millions of deaths in the Congo? Or the persecution of Christians in Iran – or in Muslim-controlled Bethlehem?

We know you aren’t all anti-Semites but there were three malign groups working at General Convention. One group consisted of classic anti-Semites. Friends in the church have told us through the years that there are far more of them than we wanted to hear about.

A (hopefully) larger group consists of unconscious anti-Semites. If they were honest, they would understand that the answer to all the questions we posed above is that deep-down, they just don’t like Jews. Nothing else can account for their fixation on Israel, their double standard, their demonization of the Jewish State, and their willingness to swallow any lies damaging to Israel without skepticism.

A third group are simply naïfs who have replaced their theology with one that preaches that power is sinful. Israel has power; therefore, it must be demonic. About demons, you can believe anything. No special animus towards Jews.

Let us state this loudly and unequivocally: There was a fourth group that pointed out the very things we’re talking about. We watched them with gratitude, including the Bishop of Los Angeles. But there were too few of them.

G-d will help the Jewish people. He has for 3,300 years. But only if we believe in ourselves, our mission, our rights. Only if we don’t fall prey to “the hug.” Thanks, Episcopalians, for reminding us that some hugs aren’t worth waiting for. 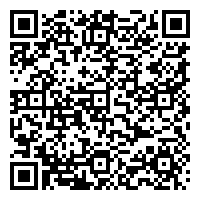