As we speak, Russian President Vladimir Putin is meeting with Azerbaijani President Ilham Aliyev and Armenian Prime Minister Nikol Pashinyan to lay the grounds for a lasting settlement to the Nagorno-Karabakh conflict, after 44 days of war ended in a cease-fire agreement. In the eyes of Azerbaijani MP Azay Guliyev, who heads the Azerbaijani delegation to the OSCE PA and who serves as Vice President of the OSCE PA, the State of Israel can contribute “to the reconstruction process in Karabakh at this stage and be actively involved in this process.”

“First, we are incredibly pleased with the level of friendship and cooperation between Israel and Azerbaijan,” MP Guliyev proclaimed. “In recent years, cooperation between the two countries in the fields of energy, technology, agriculture, and military industry has developed significantly. This is not accidental, because Azerbaijan is one of the very few countries, and perhaps the first one, where the Jews live in the most comfortable, peaceful, and safe conditions, without any discrimination. I know that the Jews living in Israel also have a special respect for Azerbaijanis and appreciate all our positive steps and actions. I think that these friendly relations and cooperation should continue.”


“At this time, I am less optimistic about American and European involvement on the Karabakh issue,” MP Guliyev noted. “As for the European countries and the United States, I think that these countries should first express their strong opposition to the forces supporting occupation, aggression, and ethnic separatism, and emphasize at every opportunity that this is unacceptable. These countries must openly call on Armenia to refrain from revanchist tendencies and actions, not to interfere in the internal affairs of Azerbaijan, and to renounce the hateful rhetoric against Azerbaijanis. I think that giving such messages would be an extraordinarily strong signal for the former occupant country at this stage.”

According to him, the United States and Europe despite their past mistakes can still play a positive role in promoting peace between Azerbaijan and Armenia, in recognition of the new realities on the ground: “Armenia must face up to the fact that the only guarantee of its future development is directly connected with regional cooperation rather than baseless territorial claims against Azerbaijan.”

Regarding Russia, MP Guliyev stressed that they have been involved in implementing the peace agreement from the very beginning and that Azerbaijan expects them to implement every part of the agreement, “especially regarding the withdrawal of illegal armed groups from the area. These illegal armed groups pose a terrorist threat to us, and they must leave Azerbaijan under the agreement. Unfortunately, we do not see it yet.”

“On the contrary, terrorist groups, inspired by the inaction of Russian peacekeepers, dare to attack, and kill Azerbaijani soldiers,” he added. “It is true that such terrorists are adequately responded to and immediately neutralized. However, this work must be done by peacekeepers. On November 10, we agreed to allow Russian peacekeepers to come here to prevent additional bloodshed and for the Armenian militants to voluntarily leave our country, and therefore the peacekeepers must perform their duties properly. Of course, such a situation does not satisfy us, and it causes legitimate dissatisfaction in society.”

For Azerbaijan, one of their greatest tasks after restoring their territorial integrity is to rebuild the infrastructure that was destroyed: “To this end, there is a need to take appropriate measures to ensure peaceful coexistence between Azerbaijanis and Armenians in Nagorno-Karabakh.” After all, a region cannot fully economically recover from the trauma of conflict, unless there is a full cessation of all hostilities.

“It is true that the Armenian leadership committed numerous crimes against our people over the last 30 years,” MP Guliyev stressed. “They massacred peaceful Azerbaijani civilians in Khojaly, destroyed all our occupied cities and villages, destroyed or altered Azerbaijani historical monuments as well as perpetrated environmental terror in and around Nagorno Karabakh. Of course, it is not easy to forget all of them and forgive those perpetrators. However, we must be able to look into the future, so that our children and grandchildren can have a better tomorrow than what we experienced in our lifetimes.”

In this sense, MP Guliyev would like to emphasize and stress his high appreciation for the statement issued by Azerbaijani President Ilham Aliyev, “Our citizens of Armenian descent living in Nagorno-Karabakh can enjoy all the opportunities, rights and freedoms provided by Azerbaijan’s constitution.” According to him, “This means that Azerbaijan, as a state, fully guarantees the security, economic and social welfare of Armenians wishing to live here. This is an especially important political will for living together in peace. Thus, any Armenian who is willing to obey and respect the Azerbaijani constitution can live beside us. In this case, I am convinced of the potential to establish a long-lasting peace in the region.”

“We all know that the long-running wars and hostilities in Europe ended with the realization of the fact that peace, coexistence, and respect for neighbors are inevitable,” he concluded. “Europe should share this experience with Armenia and encourage it to establish normal relations with its neighbors, rather than remaining passive as the French parliament issued one-sided and provocative declarations that hinder the chances for a peaceful co-existence of two nations in South Caucuses.” 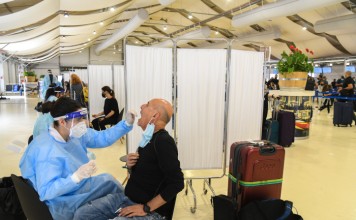