A little over a week ago, cars and trucks of the Lod municipality were burned after an illegal residence was destroyed. Gunfire is heard routinely in that town. In the Galilee and the Negev, business owners and even government companies are submitting to threats of extortion and paying protection money in order to survive. In the Negev there is gunfire day and night, even in the vicinity of communities. Judges are threatened and the police suffer from a chronic lack of manpower.


The recognition that this difficult reality exists has not led to a serious grappling with the issue and to acknowledgment of Israel’s helplessness in implementing its sovereignty. The Hashomer Hahadash (New Guard) organization, which offers protection to farmers, is insufficient: its main contribution is to raise awareness and recruit people for voluntary activity, but that activity is small in scale and lacking in authority.

Where can a Jewish citizen sleep peacefully without fearing that his parked car will be stolen? In “unplanned” communities of the Southern Hebron Hills, like Avigayil and Asael; or in the large, planned, neighboring community of Meitar, which is located within the Green Line? The difference is that in the West Bank, there is a security regime under IDF auspices. The fact that in the Negev and the Galilee the threat to governance is spearheaded by crime families with Israeli citizenship prevents the authorities from internalizing the significance of the threat. To put it plainly, the official State of Israel has not even begun to develop a conceptual approach to the reality that is taking shape.

What is needed is a more serious effort to understand what is happening. We are facing a large-scale threat, with all that that entails, to the sovereignty and indeed the existence of the Jewish state. The magnitude of the threat requires a systemic reconfiguration that fully incorporates the security forces, including IDF units.

After the uprooting of the residents of Gush Katif in 2005, I was quoted in Haaretz as saying: “Here, in a sovereign decision of the State of Israel, which was implemented by deploying the army and the police, we gave the State of Israel the right and the justification to impose its laws and its sovereignty on other citizens in other places as well.” Responding to claims that the army should not be used for domestic purposes, I said that a sovereign must defend its sovereignty against both domestic and external threats, and it has an army and a police force for that purpose.

In normal times, a democratic state should indeed use its military for defense against an external enemy and its police force for the maintenance of domestic law and order. But when the domestic threat reaches a state of emergency, the distinction between an external and an internal threat loses its meaning. In Paris and Brussels, too, over the past decades, military units have been deployed to help the police.

It is often said that “only in Israel is the whole country on reserve duty,” but that adage has not been true for a long time. Most of those discharged from the IDF are not assigned to reserve units at all. What is needed is the creation of a sizable security force based on reserve soldiers and perhaps under the authority of the Home Front Command or the Border Police. This would be a kind of “civil guard” similar to the National Guard in the US—but expanded, empowered, and professional.

Citizens under threat deserve state protection. Unfortunately, the Israeli government is in denial and does not allow itself to acknowledge a phenomenon that is turning into an existential threat. What is needed is an all-out campaign: the formation of a military and police force alongside appropriate preparations by the State Attorney’s Office and the legal system to restore sovereignty and governance. 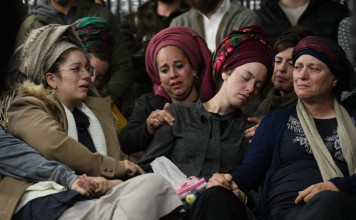