So, what does Roger Waters think of music, his critics and the normal life we all want to get back to? We find out in Frank Barat’s recent interview with musicians Roger Waters and Brian Eno. Barat, a French author and filmmaker, has edited books with Noam Chomsky, Ilan Pappé, Ken Loach and Angela Davis. He was also the coordinator of the Russell Tribunal on Palestine, which declared Israel an apartheid state, from 2008 to 2014. So that should give you a hint of how the interview goes.

As the co-founder of the progressive rock group Pink Floyd, Roger Waters is well-known to multiple generations for his philosophical lyrics and elaborate live shows. He is also notorious for his anti-Semitic rhetoric and anti-Israel politics.

Fellow Englishman Brian Eno may be less of a household name, but he is a widely respected composer and producer within the music industry. He shares Waters rabid anti-Zionist politics and along with director Ken Loach and musician Thurston Moore, is one of the most outspoken artists supporting the BDS campaign against Israel. Eno denied permission to the Batsheva Dance Company, one of Israel’s most critically acclaimed performance groups, to use his music for performances in Italy when he discovered that the Israeli embassy was sponsoring the event.

From the interview, it seems that both Waters and Eno have developed a sadly cynical view of music. Instead of celebrating it as the universal language that bridges cultures and fosters understanding, Waters worries that “music can lull us into complacency.” It is a “tool of the propaganda machine,” he opines, and a “tool of the Ministry of Information … that is being used to destroy the world!” What propaganda machine and which Ministry of Information remain unclear, but, yes, that is a direct quote. Eno tells us that appreciating art does not make you a good person. After all, Himmler, he offers cryptically, was a great fan of opera.

Supposedly about music and politics in the COVID-19 world, it did not take long for the conversation to stray to their love to hate topic: Israel. When Barat asks why there are so few musicians and other artists supporting BDS, Waters blames the “powerful Israel lobby,” and then quickly segues to besmirching the character of his fellow artists. Any musician who does not want to get involved in Israeli-Palestinian politics, according to the famous bass player, “could not possibly care about people anywhere else in the world. … The Rolling Stones (who played in Israel in 2014) don’t care about human rights. Of course, they don’t. They care about the money.”

Eno offers three potential explanations. First, greed; they are in it for the money. Second, cowardice; they are afraid of being called anti-Semitic. And third, naiveté; they “honestly believe that art is always good and therefore the best thing they can do is carry on making it.” To undermine this principle, Eno makes the ridiculous strawman argument that even bad people can like art. 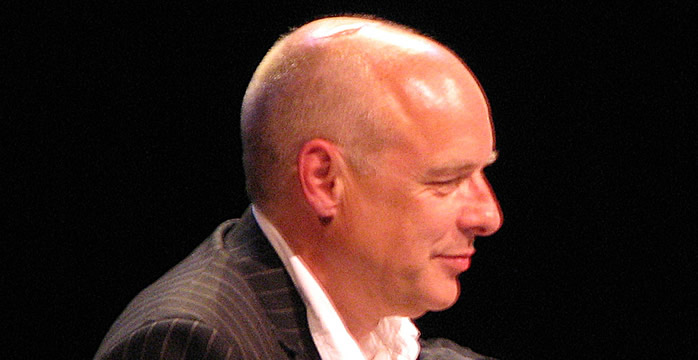 Nobody is saying that people who do horrible things do not like art and music. The artists who reject the cultural boycott recognize that people are much more likely to like one another when they feel they have something in common and art and music can provide that commonality.

In addition, art can promote understanding and compassion for a culture unlike one’s own. The Iranian film that won the Oscar for best picture in 2012, titled A Separation, was about a divorcing couple dealing with an aging father suffering from Alzheimer’s disease. This universal predicament played out within a distinct culture allowed the audience to connect with the characters on a personal and emotional level. Should the rest of the world boycott this film because it was made by an Iranian filmmaker whose countrymen call for the destruction of the United States and Israel?

Both men want to influence the way the world thinks about the Israeli-Palestinian conflict, which they see as part of a larger revolution. One must lay the groundwork or create “a climate in which revolution can happen,” according to Eno, by “constantly getting your message out.” The “revolution” includes the elimination of the Jewish state, and the “climate” includes slandering Israel.

To those who ask Roger Waters to, in his words, “shut the f*** up” and stick to music, he says both ironically and arrogantly, “No! You’re not an artist, you shut the f*** up. … How dare you think you have an influence on my life. … You’re a nobody.”

As for that normal life that the rest of us long to return to?

For Waters, normal is “rapid, neoliberal capitalism gone completely crazy.” (This from a man with an estimated wealth of $270 million, and homes in both the Hamptons and New York City.) Normal is the “worst thing that can happen to the world,” according to Waters. And so, apparently, is art and music.

Be forewarned, he counsels us, “we can always talk about art as something good. But it is very powerful, and anything powerful is dangerous.”