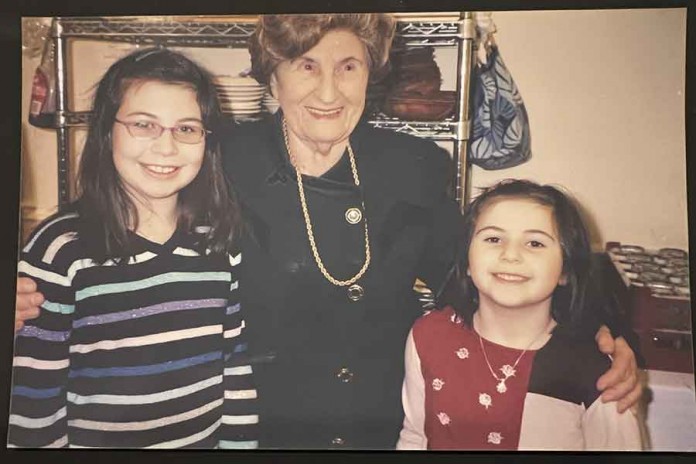 A week before my grandmother’s birthday I baked a cake in her honor. For years after she died, I had left her birthday marked in my Google calendar, but after some time I deleted it, deciding that I did not need a chirpy notification ping in order to remember the date. I would soon find out, however, that memory is fickle and fleeting, that the years pass, and newer, more urgent information slowly smothers the dustier facts with the soft blanket of time.

As the icy days of January waned, I flipped through my phone to see what February held in store for me. Aside from a doctor’s appointment, my month was as bare as the trees; and as my fingers scrolled through the dates, something in me pinged that February also held my Bubby’s birthday. I played the game where I figured out how old she would have been had she lived this long. The math was incalculably absurd. A hundred and eight is not a real number, not a real age; it is a fantasy, a wish, a dream whose reality might have been a nightmare. Still, who was I to make such negative assumptions; only an alternate universe would have told the tale. I conjured an image of my one-hundred-and-eight-year-old Bubby and spun a world where she still existed.

She would have been a great-great-grandmother, and wow, oh wow, how she would have loved that. As I got lost in my reveries, I realized with a start that I was not a hundred percent sure what the date of her birthday was. I texted my sister, but she wasn’t sure either. I had narrowed it down to two options and was reasonably sure which one it was. I knew that my mother knew, but I was embarrassed, afraid to ask her. I didn’t want her to think that I had forgotten because I didn’t care, and so in order to maybe, possibly, hopefully, trigger my memory, I baked a cake.

Technically, the recipe was not hers. It originated with a neighbor of ours and my grandmother had tweaked it, combining her European sensibilities with the genetic ability to bake and cook without following a prescribed template. Most of the ingredients are nothing special – commonplace pantry items that even a novice baker would have on hand. The secret is in the top layer, a glorious collaboration between sodium bicarbonate and a chocolatey wonder called Bosco syrup.

Here is our family’s recipe. It is simple, slightly old fashioned, and virtually foolproof. As your knife slices into the warm velvety layers, listen closely; every crumb tells a story.

It starts out with two sticks of margarine.

Back in the old days we thought that margarine was healthier than oil. Clearly my grandmother knew better. “Too much,” she said. “Too much.” When she made the cake she only used a stick and a half. “Better for you, healthier.” My mother didn’t like this modification and neither did I. Without this extra half stick the cake lost its density as well as its ability to leave that wonderful shiny residue on any surface it touched. Although I didn’t love her version I did love her adamant refusal to follow the rules.

Add two cups of sugar to the mixing bowl and cream with the margarine until fluffy. When I started baking, I didn’t realize that you had to bring the margarine to room temperature. I had called my grandmother while I was making the cake on my own for the first time because I didn’t understand why the margarine would not transform from sticks into cream. She was quiet for a bit, and then asked me if I had left them on the counter to warm up. I had not. Later I would learn the hard way that it was also possible to leave the sticks on the counter for too long, especially during the summer. There was a window that existed between too hard and too soft, between unforgiving and pliable. Somewhere in there is a lesson to be learned from room temperature margarine sticks.

When I was first married there were not a lot of heimishe cookbooks around. The first one that I owned was literally called “The Heimishe Kitchen,” and was put out by the Ladies Auxiliary of Nitra. I never baked any of the cakes from that cookbook for one simple reason – most of the recipes called for a ludicrous amount of eggs. Although I married into a Hungarian family and was familiar with some of the nuances of Hungarian baking, the prospect of baking a cake with fifteen eggs allowed me to perfect my three-egg Bosco cake.

Alternate three cups of flour with one cup of water and mix with the other ingredients. 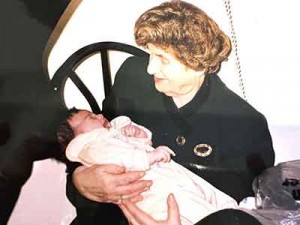 When my girls were little, I tried to encourage them to watch me bake so that when they had homes of their own they would not have to learn the hard way that margarine needed to be softened on the counter before creaming. I also tried to teach them that you didn’t necessarily need to follow the recipe exactly. I used to put all three cups of flour into the bowl, turn the mixer on, and watch the flour fly as I added the water and allowed the powdery storm to calm down. Later, much later, one of my daughters would be making the cake and commented that it would make much less of a mess if the flour and water were actually alternated. Point taken.

Pour 2/3 of the batter into a greased tube pan. Add ¼ tsp baking soda and ¾ of a cup of Bosco to the remaining batter and mix well. Pour on top of the white batter and bake for one hour at 350 degrees.

What happens if you don’t have Bosco syrup and you substitute Hershey’s, or Liebers, or some other non-Bosco brand? From a practical perspective, nothing happens, nothing at all. The cake will still bake well, will still come out perfect, and will still taste delicious. A true connoisseur however; one who has sampled multiple iterations of the cake, can attest that using real Bosco creates a richer and denser chocolate layer, which gives it the texture of a pound cake. From a theoretical perspective it is totally and utterly crucial to use the Bosco or you defeat the whole purpose of using an heirloom recipe. Using Bosco allows the cake to transcend being a mere marble cake into a mystical, metaphorical confection. No longer the simple sidekick to a cup of coffee, its magical spell transports you back into Bubby’s loving embrace, back to a time when you were the center of the universe, a princess, a diamond, sheer perfection in a tiny human form.

I saw on the internet that they changed the Bosco recipe back in 2020, omitting the vanilla and the malt extract that gives the syrup it’s unique taste and consistency. When I was a little girl it was packaged in a glass jar with a wide opening; now it is packaged in a brown plastic container that looks exactly like all of the other chocolate syrups except for the label. Nonetheless, I hold fast to my belief that Bosco is the only authentic way to make a Bosco cake; even in its new altered form it is imperative to stay true to family traditions.

I finally remembered when my grandmother’s birthday was. It came to me, unsurprisingly, on Holocaust Remembrance Day when I was looking at an old picture of her from the war. Superficially this is a sweet story about a sweet cake, a tale of a lost and found birthday and of a Bubby’s love. But if you sift a little deeper, through the flour and the sugar and the Bosco that’s not really Bosco anymore, it is also a lesson about the importance of details. Which ones to treasure, which ones to let go. What is sacrosanct and immutable, and what can we compromise upon, yet still stay true to our family’s traditions. And even more difficult, how do we bring the past forward into the future, yet still stay attuned to the present? Maybe it’s an old lullaby, a dog-eared photo, a yellow paged Tehillim with a broken spine. Maybe it’s a pair of rusted knitting needles attached to a partially knitted sweater that no one had the heart to discard after its owner left this world. Or maybe, just maybe it’s a recipe. One which calls for ingredients that are unhealthy, unheard of, unfound.

And someday, someone fresh and young and new will hunger for things that are old and quaint and meaningful. And one rainy Sunday she will be poking through some old boxes in her grandmother’s house and come across a binder with dozens of recipes handwritten on 5×7 index cards that are filed in categories such as appetizers, desserts, and Yom Tov specialties. The first one on the first page catches her eye because it uses an ingredient she has never heard of before. Carefully, she climbs down the rickety attic steps and bursts into the kitchen. “Bubby,” she says, holding the brittle index card up the light, “what’s Bosco?”