Rep. Alexandria Ocasio Cortez and Rep. Ilhan Omar both graduated from college in 2011.  In less than a decade, campus anti-Semitism had made the great leap from campus to Congress.

2011 was a banner year for campus anti-Semitism in alliance with its progressive leftist allies.

Last year, the Trump administration reopened an investigation into campus anti-Semitism at Rutgers University in 2011 that had been shut down by Obama officials back in 2014. The shutdown of the investigation, like the similar shutdowns of terrorism investigations, were part of a pattern.

The investigation was reopened by Kenneth Marcus, the new Assistant Education Secretary for Civil Rights, a Jewish civil rights leader whose appointment Senate Democrats had stalled for 8 months, and whose confirmation every single Senate Democrat voted against.

The intersectional values of campus politics were being used to block the fight against anti-Semitism.

“Branding criticism of Israel as automatically anti-Semitic has a chilling effect on our public discourse,” Warren ranted.

Even as the Democrats tried to change the topic, Marcus’ nomination was a referendum on campus anti-Semitism. Reopening the Rutgers investigation was exactly what Senate Dems had tried to block.

The years in which Rep. Alexandria Ocasio Cortez and Rep. Ilhan Omar were on campus saw the mass normalization of campus anti-Semitism led by hate groups like the Muslim Students Association.

Omar’s congressional anti-Semitism mirrors traditional MSA and other campus hate group tactics of provoking Jewish students with anti-Semitic harassment and then riding the backlash by claiming to be “people of color” who have fallen victim to a pro-Israel lobby trying to silence criticism of Israel.

The House debate mirrored previous campus debates about anti-Semitism with a coalition of leftist and identity politics groups, the Congressional Black Caucus and the Progressive Caucus, defending anti-Semitism, and leaving Speaker Pelosi cast in the role of the hapless college administrator. Like so many college administrators, Pelosi inevitably dismissed Jewish complaints and bowed to the radicals.

The precedent for these tactics had been set on college campuses. Cortez and Omar just exported campus pressure tactics to congress. And, from her very first protest against Pelosi, a sit-in at the Speaker’s office, Rep. Alexandria Ocasio Cortez made it abundantly clear that her playbook came from the college campus, not the adult world of politics. And Pelosi had the same vulnerability as college administrators, a fear that radical protests would cut her off from her billionaire leftist backers.

Speaker Pelosi, like college administrators, has chosen to pick her battles with the socialist selfie club. That means defending her priorities, her office and the agendas of her special interests, not Jews. The average college administrator won’t pick a fight that might force him out of his cushy job over anti-Semitism. Neither will Speaker Pelosi who wants to move on to the big issues. Not anti-Semitism.

Faced with a coordinated assault by the Congressional Black Caucus, the Progressive Caucus, and anti-Israel leftists across the media, she did what so many administrators have done, offer a generic condemnation of bigotry without focusing on the specific anti-Semitism or naming names.

The 2020 candidates, at best split the difference, and at worst, like Warren, attacked the Jews.

In less than a decade, campus anti-Semitism had made the great leap from congress to campus. In a year, it might make the leap from campus BDS groups all the way to the White House.

Why did Senator Elizabeth Warren turn to anti-Semitism? 2020 Democrat primary demographics break down into three groups: minorities, elderly lefties, young lefties. Warren performs decently with elderly lefties, abysmally with minorities and poorly with young lefties. Her main competition is Bernie Sanders who had formerly been the most anti-Israel voice in the 2020 race. And he had quickly defended Omar.

Warren doesn’t seriously expect to make any headway with minorities. Black people don’t like either Bernie or Warren. There are already African-American candidates in the race. And the only white candidate who might make inroads with the minority vote is Joe Biden. Warren’s only play was going after the campus radicals who love Bernie. And she did it by allying with anti-Semites.

Campus politics are not only transforming the House, but they’re paving the way to the White House.

No Democrat candidate for the White House has been willing to express clear support for Israel. They, like Pelosi, have become subservient to an anti-Semitic campus lobby whose backing they want.

Conservatives and pro-Israel activists have been concerned about campus anti-Semitism, but they have spent too long thinking of it as a campus problem. The campus is the incubator for tomorrow’s leaders. And, for anyone who dismissed campus crybullies and their narcissistic safe space tantrums, Cortez and Omar are warning signs that campus politics is well on its way to defining our national politics.

If we lose the battle for the college campus, we will be fighting the same battles in Washington D.C.

The college campus is where most of tomorrow’s elected officials get their first taste of politics. It’s where they learn what works and what doesn’t. Previous generations had leaders who were forged in the molten crucible of war. The closest thing that most of today’s Democrats have to a conflict is student politics. It sets the pattern of their views and their tactics as they climb the ranks of our political system.

Jewish Democrats who failed to confront campus anti-Semitism in the previous decade now find that they are losing to it in the Senate, the House of Representatives, and, eventually, the White House.

The same organizations that spoke out against the David Horowitz Freedom Center’s aggressive campaigns against campus anti-Semitism now wring their hands helplessly over Rep. Omar. Their statements indicate that they have absolutely failed to understand the lessons of the last decade.

The alliance of the Muslim Students Association and Students for Justice in Palestine, the coalition of Islamists and leftists that defined so much of campus life for Jewish students, is defining national politics. Jewish organizations that failed to stand up to either one are now losing out to both.

Rep. Omar and her political allies have deployed that same argument nationally. And the Jewish Democrats did in the House exactly what they had done on campus, they offered some token protests. And then they folded, accepted a meaningless gesture from the boss, and learned their lesson.

Rep. Omar was able to get away with the anti-Semitic bullying of other House members in the same way that Jewish representatives and candidates were bullied out of student government. Rep. Alexandria Ocasio Cortez’s next target will be Rep. Elliot Engel and assorted other Jewish elected officials.

When Rep. Ilhan Omar ran for office, her donors included Hatem Bazian, the co-founder of Students for Justice in Palestine. Bazian, who has a long history of anti-Semitism, had started out allegedly harassing Jewish students at San Francisco State University: including blocking a Jewish student from a spot on the Student Judicial Council. Bazian’s hateful politics have now gone national via Omar’s anti-Semitism.

The launch of Jexodus has occasioned sneers and smears from establishment organizations. But Jewish Democrats may want to consider what their future in a party defined by BDS supporters and anti-Semites who play the identity politics card while trafficking in anti-Semitism, looks like.

We are all on campus now. 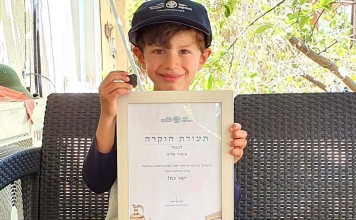