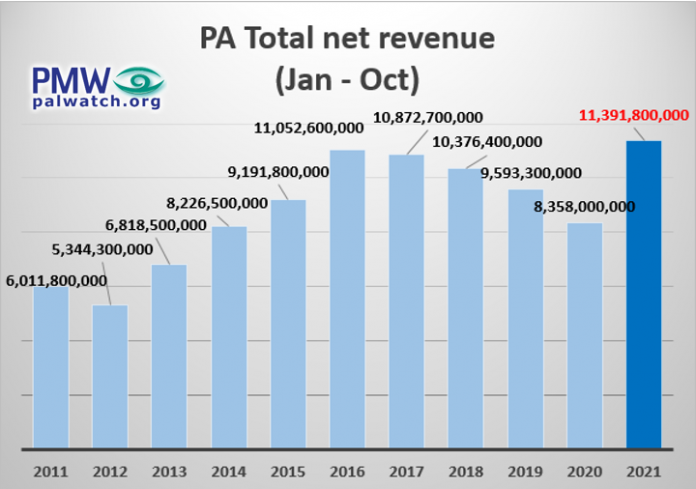 Financial reports released by the Palestinian Authority show that the the PA’s revenue during the first 10 months of 2021, was the highest ever. Curiously, this fact was entirely absent from the report released by the World Bank in preparation for the meeting of the Ad-Hoc Liaison Committee for Palestine – an international meeting during which the PA cries about its financial woes and begs the international community to donate more and more funds.

Following the meeting, which took place on November 17th in Oslo, Norway, PA Prime Minister Mahmoud Shtayyeh updated his cabinet expressing hope in what was termed as the PA’s “financial crisis.”

“We received serious promises during the meeting of donor countries, which was held in the Norwegian capital, Oslo, to resume providing aid to the [PA] treasury…”

The rise in PA revenue was not the only detail missing from the World Bank report. Other clearly missing details included the fact that the PA spends hundreds of millions of shekels every year paying financial rewards to terrorists and the fact that in the last decade the PA has transferred over 8 billion shekels to the Palestine Liberation Organization (PLO). Part of the money transferred has been used to fund internationally designated terror organizations, such as the Popular Front for the Liberation of Palestine (PFLP), that are still members of the PLO. Another part of the funds transferred, appears to have facilitated the purchase of a considerable PLO owned international real estate portfolio.

The PA publishes monthly financial reports as part of its commitment to financial transparency, and as a prerequisite for receiving some international aid. Instead of focusing merely on the alleged budget deficit as a reason to throw money at the PA, the international donors would be well advised to first take a closer look at where the PA is spending its money.