The beeping started at seven o’clock in the morning. Although I’d been up since six, the sound was unexpected, discordant. I knew they were coming, but was hoping it wouldn’t be today. Furtively, I peered out of the front window, expertly holding the edge of the vertical blind in a way which allowed me to see, yet not be seen. A big yellow truck with a claw was furiously breaking up the part of the street that connects to the sewer on the corner. I wondered briefly what kind of truck it was, but at seven a.m., I honestly didn’t care what the truck was called, I just wanted it to go away.

The first clues were the yellow and blue PSE&G flags that popped up on our lawn last month, followed soon after by blue stripes of paint that traversed the grass and meandered out onto the road. One of our neighbors naively thought the township was planting trees and needed to mark the gas lines. I knew better. The shoe finally dropped when an official letter from the borough was taped onto our front door informing us that a major construction project was about to begin on the streets and sewer. The start date they gave was the very next day. I couldn’t imagine they would start the project on time. Since when does anything run by bureaucrats happen when it should? But it did indeed start on time, with the shrill staccato of the yellow beast.

There was no question that the sewers needed an upgrade and the street needed to be repaved. For the last five years or so I prayed not to blow out a tire every time my car roller-coastered over the corrugated road. I wanted it, however, to happen magically, to have someone wave a wand and magic a beautiful new road into being.

Every little detail involved with the road work annoyed me. Aside from the incessant beeping and their ludicrous arrival time, the mere presence, the sheer galling existence, of the trucks annoyed me. The old white pickup that insolently parked itself backwards in front of my house. The ugly red flatbed that held some random pieces of wood that served no obvious purpose at all and was parked in a space that had the nerve to be this close to my driveway. And that horrible, horrible yellow truck. It moved backwards and forwards and spun around. It screeched at every swivel and clawed its way imperiously down the block, stopping traffic with defiant glee. I was scared to back out of the driveway. I had my husband turn my car around every morning so I could nose out gingerly when I had to leave for work. I grumbled and groused to anyone who would listen.

After a few days of incessant whining I grew disgusted with myself. What a stupid, petty thing to get upset about, and yet it took up a lot of mental real estate that could have housed something much more productive. As I thought the whole thing through and tried to get some perspective on my outsized reaction, it occurred to me that this annoying road work was my chodesh Elul wake-up call.

Elul is a month of transitions. Warm summer days melt into fall, students return to school, and the lazy vacation feeling that sets in after Tisha B’Av dissipates with the first blast of the shofar on Rosh Chodesh Elul. For those of us who are untethered by the school calendar and not obligated to daven in shul, it’s easy to let Elul slip on by unnoticed. Devoid of holidays or commemorative days, it’s possible to make it through the month without even realizing that Rosh Hashanah is days away.

This happened to me.

Until a big yellow truck blasted me out of my stupor.

Rabbi Dessler calls the teru’ah a “ distinctive shofar tone,” a broken sound that signifies stirred-up emotions. Building on this thought, continues Rabbi Dessler, the Zohar equates the word teru’ah with shattering – which is the hidden key to doing teshuvah.

Teru’ah is an alarm clock, waking us from our slumber, our complacency. It’s a shock to the system, a yellow truck early in the morning, unexpected, uncomfortable. It’s very nature forces us to pay attention; it’s impossible to ignore something that consumes your senses and makes your heart race. Of course I want to do teshuvah. Of course I want the road back to Hashem to be smooth and unblemished, easy to traverse. But it’s difficult. And messy. And noisy. A true cheshbon hanefesh requires the road to be repaved and in order to accomplish that, layers of ego and self delusion need to be pierced, shattered, and then; rebuilt. Time consuming. Painful. Psychologically uncomfortable.

One of my biggest flaws is my inherently pessimistic nature. Although jokes abound about the pessimistic nature of Jews, it is actually a difficult way to view the world and an impediment to true happiness, bitachon and connection to Hashem. When the beeping truck startled me out of my morning reverie, instinctively I reacted negatively. It took me days to acknowledge the necessity of the work; hours of wasted psychic energy mired in a mindset that was destructive and unproductive.

The Rambam says in Hilchos Teshuvah that there is more to the mitzvah of tekias shofar than just the passive act of hearing the sounds. There has to be an internalization of the shofar’s message. Merely hearing the sounds is inadequate; it requires a corresponding action in response to the teru’ah, a shattering, an emotional breakthrough strong enough to elicit positive change.

How do you take a characteristic that is so intrinsically part of your personality and change it? How do you mend the cracks in the road and rebuild a solid path back to the Almighty?

If you’re fortunate it starts with a jolt, a crack, a collision with the unanticipated. An unequivocal message from G-d. But sometimes G-d is silent. Or subtle. And oftentimes I – we are deaf, unreceptive, not allowing His voice to penetrate due to obstinance and unwillingness to change. This time, though, I’m lucky. I go over to my front window and push aside the blinds. There’s a big yellow truck whose name eludes me rolling up and down the block. Its piercing call, though a pale imitation of a true teru’ah, shatters the morning calm once again. This time, I’m ready. Ready to be fractured and crushed. Pulverized into a million shards of unrecognizable pieces, and slowly, methodically, refashioned, into a version of myself that sparkles, diamond bright, in the glare of the morning light. 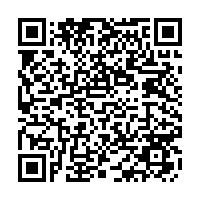