“The buck stops here!” “I’m from Missouri!” These are among a universe of insightful aphorisms that Harry S. Truman coined and reflect in basic ways a Jewish manner of thinking. President Harry S. Truman led the US in being the first nation to approve at the UN the creation of the state of Israel.  His perspectives and manners earn him a de facto Jewish way of responding to the world.  In fact in his youth when he became best friends with a Jewish guy from the east side, Eddie Jacobson (more about him later) with whom  he effectively ran a military canteen  during the first world war  Truman was  often jokingly  referred to as a Jew himself because of his effective business capacity. Truman in these instances proudly   responded, “I guess I should be proud of my Jewish ability. “ It may be seen upon a quick review of his exciting life that Harry Truman in a multitude of ways mirrored the values so dear to Judaism.

Harry Truman initially in life had no contact with Jews, but he did have a natural disposition that was in true harmonization with a Jewish outlook. This included a love of truth and an openness to explore other viewpoints. The Talmudic method of exploring viewpoints encourages leaving one open for future probing, and­­ is a methodology that would be truly at home with Truman.  The adage, “I am from Missouri” as a call for seeking a rationale is pervasive in the Talmud as well as earlier Jewish thought.


Truman was further very much steeped in a universal notion of egalitarian justice where all peoples were entitled to equal rights before the law. This is a core Jewish principle, first expressed by declaring “Let us make Man in our Image” (Gen, 1:26), and is reflected in a multitude of Judaic references including the rights of the widow, orphan and stranger. The rights of the stranger is mentioned repeatedly (36 times) throughout the Torah and is especially central in relation to universality. Truman also had an amazing capacity for maintaining friendships both lifelong and on an extended basis, and it is perhaps this capacity that enabled Eddie Jacobson to remain in his life and ultimately exert the influence he did upon him. Friendship although not often recognized is something  that Jewish tradition and Torah often promotes as exhibited between Jonathan  and David as well as Moses and Jethro.

Truman first met Eddie Jacobson through his military service in WW I when he operated the service canteen with him and finally entered with him into a business partnership.  They partnered a haberdashery business which unfortunately failed in the post war recession, but their friendship continued throughout their lives. Their relationship had its impact when the UN in 1947 considered the statehood of Israel. Truman was reluctant initially to provide his support because of influences by certain advisors (e.g. Marshall) and international alliances but his openness to alternative viewpoints allowed him to consider Eddie Jacobson’s plea that he pursue a now historical meeting with Chaim Weitzman.

Early in the Torah we are granted an example of Moses’s openness. This involves the advice he accepts from Jethro a non-Jew where upon the advice of Jethro he disseminates judgeship responsibilities authority to other able leaders so as to avoid being overburdened with responsibility. Another instance involves his granting consideration to the daughters of Zelophehad opposing the customs of inheritance in relation to male exclusivity. He ultimately listens to them and upon reflection takes their case to God who tells him to accept the daughter’s arguments adding not a thing. Truman’s openness to the views of others also is powerfully evidenced in his relationship with Eleanor Roosevelt. In this connection in 1946 he worked with Eleanor Roosevelt in persuading the British to allow 100,000 Jews leave their protective areas to Palestine.

Judaism hold study in high esteem and this is also mirrored in Truman’s life. Truman is sometimes described as the last president to not hold a college degree but it should be recognized that his not attending college was due to circumstance economic obstacles among them. It is significant that he took pride in the fact that he read every book in the Independence Mo. library and this at a very early age as just barely a teenager.

Truman was clearly a born leader which is a trait we sometimes detect in certain characters within the Torah as well the Talmud where this gift is granted special praise. Joseph is one such character who distinguishes himself even while imprisoned and finally recognized by the pharaoh of his time.  Truman exhibited such traits early, however, particularly within his leadership role in serving during the First World War as well as his early rise in becoming a senator and his leading role in that capacity.

Truman’s ultimate decision to support the establishment of the state of Israel was a monumental struggle and the dramatic and inspirational saga that followed is movingly revealed in David McCullough’s biography, “Truman” The pressures to support as well as resist the UN proposal for partition were immense in those March days of 1947.

On the one hand there were the powerful voices of General George Marshall and Loy Henderson (Advisor and US Foreign Service Officer ) insisting that Truman should resist where Marshall threatened to resign if he supported statehood.  They claimed the US needed the good will of the oil producing Arab states and that Israel was forming a socialist government which the  Soviets at this point in time of cold war formation was warming up to as comrades in harmonious spirit. Further Truman’s support hinged to a tremendous extent on Marshall’s popularity.  At the other end there was the strong opposing voice of Clark Clifford (White House Council) advocating recognition adding to the circumstance that Truman harbored a longstanding deep empathy for the establishment of a Jewish state. Moreover he was being strenuously pressured by a few Zionists in what he mistakenly perceived as a disrespectful conduct for him to support the recognition of the state.   At this point it appeared that Truman was leaning significantly towards a UN trusteeship and against partition.

It was at this point that Truman’s old friend Eddie Jacobson entered the picture at the insistence of B’nai Brith to shift the balance in the opposite direction. Jacobson without an appointment walked into Truman’s office at the White House and managed to see Truman. He asked that Truman just let Chaim Weitzman, the intended Prime Minister of the new state visit him to discuss the matter of recognition. Truman then stated plainly he had no wish to talk about Palestine. At this point Jacobson fixed his eyes upon a statute of Andrew Jackson a hero of Truman. He then referred to Chaim Weitzman as Eddie’s own hero just as Jackson was to Truman and asked if he would not refuse to see Weitzman due to any perceived offense by a few Zionists or recommended by some of his advisors. This he emphasized would prevent Truman from doing what is morally right and historically vital simply because certain Zionists offended him. Truman upon looking out the window suddenly turned himself around and told him in some emphatic language he would see Weitzman.

It is significant that they were speaking in terms of heroes and thereby addressing ultimate values.  Truman had a talent for taking his values so dearly to heart that they became an ongoing everyday part of life decisions. This is very much consistent with the valued role of silver trumpets in Torah (Numbers 10) where their soundings represented a pervasive effort to the incorporate spiritual values into day to day living. The meeting with Weitzman that followed overflowed with shared enthusiasm which turned the tables towards the creation of the new state. Weitzman’s request that the historical Negev be included within the new state was recognized and he was impressed by Truman’s grasp of the geography of the area.   Both rode this wave of enthusiasm and it is related Truman later recalled Eddie Jackson being present. Records show, however, that he was not physically present, but in a deeper sense he was there through the special place in Truman’s mind and heart for Jacobson. In gratitude to Truman’s historical response at this meeting Chaim Weitzman later gifted Harry Truman with a Torah scroll which today is displayed in the Truman library. One can hardly imagine a more heartfelt expression of gratitude of Harry Truman’s vital role in the official creation of the state of Israel. 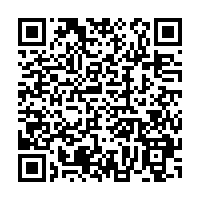