It may be hard to believe that any self-described Jewish organization could so viciously distort the meaning of a sacred Jewish day. But J Street has never met a Jewish religious commemoration that it hasn’t turned into a propaganda weapon for slamming Israel.

On Passover, J Street complained about the “plagues” for which it blames Israel, such as “the plague of home destruction.” According to J Street’s “Haggadah,” if the Israeli army undertakes a court-sanctioned dismantling of a home used by terrorists, then it is to blame for “encouraging retaliatory terrorist attacks.”

Israel, of course, does not demolish Palestinian villages. J Street was referring to instances in which handfuls of illegal Arab settlers squat on Israeli land, call themselves a “village” and then accuse Israel of “demolishing” them when the police dare to enforce the law. But as far as J Street is concerned, if facts get in the way of the narrative, well, just push them aside.

Considering the way J Street has mangled the meaning of other sacred days on the Jewish calendar, maybe I shouldn’t be surprised at J Street’s crude exploitation of Tisha B’Av. But that doesn’t make it any more acceptable.

In these days leading up to Tisha B’Av, the J Street web site features a proclamation by Judith B. Edelstein, a member of its “rabbinic cabinet.” She argues that Israel today, faces a Tisha B’Av-like destruction because of “ the annexation proposals of the current Israeli leadership,” Israel’s “denial of basic rights and attempting to usurp land,” and Israel’s “subjugating” of the Arabs. All this, she claims, is “laying the groundwork for Israel’s demise.”

Edelstein’s sloganeering has no basis. Israel does not “subjugate” anybody or “deny” the Arabs’ “basic rights.” Arabs who are citizens of Israel have equal rights; Arabs who are residents of Gaza or the Palestinian Authority have whatever rights the P.A. and Hamas choose to permit.

Equally absurd is Edelstein’s claim that Israel’s “annexation proposals” could possibly result in “Israel’s demise.” Even the maximum proposal involves reuniting less than one-third of Judea and Samaria with the rest of Israel. Very few Arabs reside in those areas. Making that small territory part of Israel will not affect Israel’s demographic balance or endanger Israel in any other way.

But if Rabbi Edelstein is genuinely concerned about the possible destruction of Israel, let me suggest that she consider an actual danger to the Jewish state. According to her Tisha B’Av statement, Edelstein is a resident of the Upper West Side of Manhattan. She ought to take a subway a little way uptown to the Bronx and have a look around. If a Palestinian Arab state is ever established in Judea and Samaria, Israel’s mid-section will be reduced to a width of just nine miles—narrower than the Bronx.

How do we know that will happen? Because two of the five largest cities in the current P.A.-controlled area are Tulkarm and Qalqilya. They would have to be included in the “State of Palestine.” They are barely nine miles from the Mediterranean Sea—that is, nine miles of Israel.

Think about that, Rabbi Edelstein. Nine miles wide. An enemy army would be able to cut the country in two in a matter of minutes. A terrorist with a shoulder-fired rocket, standing inside the border of “Palestine,” would be able to shoot down a plane landing at Israel’s major airport. Pedestrians in Israel’s capital, Jerusalem, would be targeted by Arab snipers perched along the nearby border, as they were before June 1967.

That’s why anybody who is sincerely worried about Israel’s destruction—anybody who really cares about another possible Tisha B’Av-like catastrophe—should be doing everything possible to prevent the rise of a Palestinian state. That’s where the real danger to Israel lies. 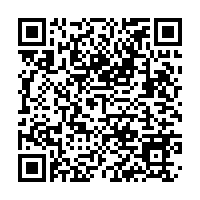