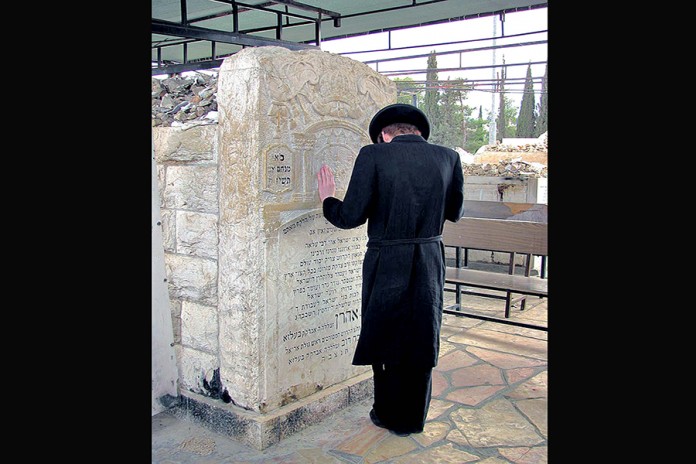 One of the things that Jews do when they come to Israel is visit holy sites, and among these holy sites are kivrei tzaddikim. One can find – in every city and in remote locations throughout the country – the graves of the prophets, the Sages of the Talmud, modern rabbis and mystics, leaders and historical figures from throughout the ages, and, of course, the graves of the patriarchs and matriarchs of the Jewish nation. While the world is “deciding” the Jewish people’s right to Israel, these graves are literally a monument to our historical right to the land – carved in stone.

While one can visit the Arizal in Tzfat, the Rambam in Tiberias, and Rav Ovadia Yosef, zt”l, in Jerusalem, any cemetery in Israel is the eternal resting place of many holy people. Almost every cemetery in Israel has a military section for soldiers who have fallen in the line of duty protecting the country, or as Rabbi Avi Weiss of New York has called them: the holiest Jews in the world. The victims of terrorist attacks are also shrouded in holiness.

It was recently explained to me why it is that in Israel, even though most people are buried without a coffin, they still bury soldiers in one. It’s because many soldiers have died in explosions and their bodies are not intact. So as not to discriminate between those who are and those who are not, all fallen soldiers are buried in a wooden box.

During Aseret Yemei Teshuvah my son and I went to visit my maternal grandmother, who is buried in Nachalat Yitzchak, a cemetery that borders Tel Aviv, Givatayim, and Ramat Gan – a kind of crossroads, appropriate to a cemetery. It turns out the Tzaddik of Shtefanesht (Ştefăneşti), Rebbe Avraham Matityahu Friedman, is buried there as well.

A woman stopped and asked us if we knew where the Tzaddik’s grave was. After pointing her in the right direction, we followed and decided we’d stop in and say a prayer. I had never heard of this rabbi, but on an everyday weekday there were people there emotionally praying at his gravesite.

About twenty years ago, I visited the grave of the tanna Rabbi Tarfon. He is buried on a pastoral hill in seclusion, not far from Meron, where, according to a tradition from the Arizal, he is buried under a giant pistachio tree. However, a burial cave was recently discovered on Mount Meron and restored by the Ohalei Tzaddikim organization, which claims Rabbi Tarfon was buried there.

Indeed, when dealing with those who lived thousands of years ago, uncertainty sometimes arises about the real location of burial. Although places like Me’arat Hamechpela and Kever Rachel have a tradition going back thousands of years, other graves like that of Rachel, Rabbi Akivah’s wife, are more difficult to discern. But when I happened to visit what is purported to be Rachel’s grave, I felt such a sudden and inexplicable outpouring of emotion that I couldn’t stop crying. Whether it was really Rachel or not, the woman buried there was obviously a holy woman.

It’s possible to fit in a visit to a tzaddik’s or tzaddeket’s grave on almost any day trip throughout the country – and each one is purported to offer segulot, whether for children, marriage, healing, or learning. Praying on a consecutive Monday, Thursday and Monday at the grave of the Admor of Zhivil, for example, who is buried in a small cemetery in Jerusalem, is reported to bring your soulmate.

In Jerusalem and Petach Tikvah, which was founded by Jerusalemites, there is the practice not to let a body remain overnight, and so funerals are often held late into the night. There is something very peaceful about a cemetery at night.

Israeli cemeteries differ from the manicured lawns and spacious plots of American cemeteries; much in the way that housing for the living differs. The graves are in close proximity to each other in a sea of hewed stone. Recently the dearth of graves in Israel has led to apartment block style graves where people are buried on floors. Although this seems a modern deviation, that’s how many were buried in caves thousands of years ago. Cemeteries are expanding both upwards and underground, although the earth of the holy land can be found in each grave.

There are a few unique attributes to Israeli cemeteries. I know of no other place in the world where people are routinely flown in from other countries to be buried – often at great expense. And Bituach Leumi, Israel’s national insurance, pays for the grave and burial of every citizen (unless they want to be buried somewhere other than their local cemetery). It’s a Jewish ideal to be buried in Israel. After all, when Mashiach comes, bimheira viyameinu, that’s where the meeting place of all souls will be. There is a tradition that if one is not buried in Israel, then at the time of the Resurrection of the Dead all the dead bodies will roll through tunnels to Israel.

This Lag BaOmer marks a year since the Meron tragedy when 45 people were killed. The dead included six Americans, two Canadians, an Argentine and a Briton and ranged in age from 13 to 65 years old. The victims were celebrating at the annual hillulah (a celebration of a tzaddik on his yahrzeit) of Rebbi Shimon Bar Yochai, at his gravesite in Meron, when stairs collapsed and they were crushed to death, themselves becoming kedoshim. It was a terrible tragedy. But as their final act in this world was dancing and singing at the gravesite of the holy Sage, he no doubt welcomed their pure souls into Heaven.

You don’t have far to look to go to visit kivrei tzaddikim in Israel. In fact, they are very easy to find.