International institutions devoted to promoting peace and cooperation are admirable in theory but in practice, during 2018, two of them — the United Nations and the International Atomic Energy Agency — have failed to live up to their founding principles and protect Israel.

The UN, according to its charter, was founded “to save succeeding generations from the scourge of war.” The IAEA, similarly, was created to ensure that nuclear energy “is not used in such a way as to further any military purpose.”

But in 2018, these two organizations ignored these noble aims when it came to Israel.

The UN’s bias against Israel is well-documented and quantified. UN Watch recently reported that during 2018 the UN General Assembly condemned Israel 21 times, but issued just 6 condemnations for the rest of the world combined. And of the six other countries to be condemned — Iran, Syria, Russia, Myanmar, North Korea, and the United States — not one was condemned more than once.

But the anti-Israel bias at the UN has manifest itself in other ways.

In December, the United States put a resolution condemning Hamas before the General Assembly. The vote came just weeks after Hamas, over the course of a single day, fired nearly 500 rockets into Israel.

The U.S.-sponsored resolution, in clear language, condemned Hamas for “repeatedly firing rockets into Israel” targeting civilians, and more generally, for diverting resources to attack Israel, “when such resources could be used to address the critical needs of the civilian population” under its rule.

While the resolution, the first one ever considered that condemned Hamas by name, was supported by an 87 to 58 majority, a last-minute procedural vote required a two-thirds majority, so the measure failed.

In December, Israel announced the beginning of Operation Northern Shield, an operation to detect and destroy cross-border terror tunnels built by the Iran-backed terrorist group Hezbollah. UNIFIL, the UN force charged with keeping the peace between Israel and its northern neighbor Lebanon, confirmed the existence of one of the tunnels a few days after the operation started.

Two weeks after the operation started, UNIFIL confirmed Israel’s assessment that the tunnels violated UN Security Council Resolution 1701, which ended the 2006 war between Israel and Hezbollah. Resolution 1701 banned the presence of any armed groups in southern Lebanon except for the Lebanese army.

A Security Council meeting convened to address the threat posed to Israel by Hezbollah’s terror tunnels ended inconclusively. The council failed to condemn the terror group, even though a UN military force found Hezbollah in violation of one of its own resolutions.

“The United States has taken Hezbollah’s threats to the security of Israel and the Israeli people at face value,” Rodney Hunter, a political coordinator from the U.S. Mission to the UN, told the Security Council meeting, “and it is high time that this Council and the international community do so as well.”

But the Security Council did not act to defend Israel.

The IAEA may not have a long record of anti-Israel actions, but during 2018 it too failed to abide by its founding principles and take actions to defend Israel.

In April, Israeli Prime Minister Benjamin Netanyahu announced that Israel had located an archive of material documenting Iran’s nuclear weapons program and spirited out some 100,000 files. At the time, a Washington Post editorial asserted that what Netanyahu revealed “doesn’t add greatly to what was already known about Iran’s pursuit of nukes.”

Israel shared many of the documents with nuclear weapons experts, including David Albright, president of the Institute for Science and International Security, and former IAEA Deputy Director-General Heinonen. The work of Albright and Heinonen and their associates showed that nuclear archives revealed that Iran’s nuclear weapons work was more advanced than previously known.

An October paper analyzing many of the files in the nuclear archive written by Albright, Heinonen, Frank Pabian, a former IAEA inspector, and Sarah Burkhard, concluded that documentation found in the archive  “raises profound questions about whether Iran is complying with the fundamental goal of the JCPOA, namely that ‘under no circumstances will Iran ever seek, develop or acquire any nuclear weapons.’”

A November paper written by Albright, Heinonen and Andrea Stricker confirmed that Iran’s nuclear weapons program had advanced further than previously thought. Specifically, they wrote, “Iran preserved an extensive amount of this nuclear weapons-related equipment, material, software, and other information in an archive and warehouse, the former the contents of which were partially seized by Israel, and the latter which Israel later identified.”

The paper also faulted the IAEA for failing to do its job.

“It is not only the Secretariat, but the IAEA Board of Governors, which has not lived up to its task,” Albright, Heinonen, and Stricker wrote in their conclusion. “They have created a double nonproliferation standard which, unless remedied, will decrease the chance of ensuring Iran does not build nuclear weapons and will serve as a playbook for future proliferators.”

Given that Iran’s leaders frequently call for the destruction of Israel, the IAEA’s failure to take actions to ensure that Iran does not develop nuclear weapons is an appalling failure of its mission to prevent the proliferaton of nuclear weapons.

The UN and IAEA were created with the best of intentions. However, their failures to protect Israel from the “scourge” of a terrorist war or to keep Iran from developing nuclear technology for “any military purpose,” beg the question: why should Israel trust either? 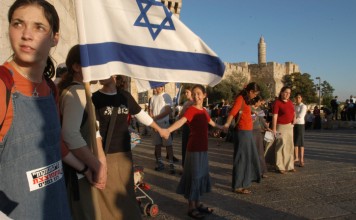