It is a historical irony that nearly a century after a string of British White Papers (in 1922, 1930, and 1939) sought to thwart the Jewish national rebirth by imposing draconian restrictions on Jewish land purchase and settlement—in flagrant violation of Britain’s obligation under a 1922 League of Nations mandate to facilitate the establishment of a Jewish national home in Palestine—an official Israeli national development plan is effectively having exactly the same effect.


Approved by the government in 2005, the National Outline Plan (NOP 35) seeks to guide Israel’s spatial development in the first two decades of the 21st century while taking into account demographic forecasts, spatial infrastructure, and trends in land and site preservation. In reality, the plan has effectively frozen Jewish settlement in the Galilee and the Negev, leading in turn to massive illegal building and land occupancy by Bedouin in the Negev.

The police, the military, and the other law enforcement agencies suffer from a perennial shortage of manpower and resources, and from the lack of a regular presence in these lands. What is required is the constant, active presence of Jewish farmers and residents as well as an ongoing momentum of legal expansion.

The approval and implementation of the National Outline Plan as a long-term master plan was an under-the-radar revolution. Who doesn’t want to preserve green spaces and protect them from development and construction? Under the cover of a seemingly irreproachable idea, a quiet revolution was conducted.

Subsequent governments can decide, as they did in September 2011, to set up new localities, but implementing that decision depends on the approval of the National Planning Authority of the Interior Ministry. NOP 35 explicitly stipulates that such matters are not the exclusive domain of the government: “A regional outline plan, intended to establish a new community, will be implemented only if…a planning institution is convinced of the justification for establishing the new community.” The government is thus at the mercy of professional functionaries. It can push for a settlement policy but not decide on one.

NOP 35 thus echoes Britain’s White Papers in two respects. First, it established constraints that make setting up new Jewish communities a labyrinthine task that gives bureaucrats the power to block government decisions. An example is the snail’s pace of the procedural aspects of building the Trump Heights community in the Golan.

Second, for many communities, including in the Negev and the Galilee, NOP 35 puts a limit on the number of Jewish households (300-500). This traps most of the communities in a planning vise that precludes the possibility of growth. The outcome is that an array of Jewish communities in the Land of Israel cannot grow organically.

What chance is there, for example, for a few dozen Jewish families in Hararit, an isolated Galilee locality that is forbidden to surpass 400 households, to put down roots and ever become a multigenerational community whose children will build their lives there? Or consider the two adjacent localities of Tuba-Zangariyye and Kfar HaNassi. In 1955, each numbered 200 families. By 2005, Tuba-Zangariyye had expanded to 1,000 families while Kfar HaNassi’s size remained the same as it was in 1955. For the long term, the National Outline Plan has set targets of up to 400 households for Kfar HaNassi and up to 10,000 for Tuba-Zangariyye.

On the overt, declarative level, NOP 35 was intended to protect green spaces. In reality, it has achieved the opposite effect by serving, deliberately or not, as a barrier to Jewish settlement and opening the floodgates for illegal building and settlement expansion by the Negev Bedouins.

Is it still possible to establish new Jewish localities in Israel? When in September 2011 the government decided to set up 10 Negev localities, it was harshly criticized by the Israeli media. According to an editorial in Haaretz:

The [vastly empty] Negev does not need new [Jewish] localities, which will gobble up land, infrastructure, and budgets and destroy a region with great ecological importance. The communities will not solve the housing shortage in Israel. At most they will allow a few hundred families to get better housing in a remote area. The building of the new localities will also cause an unnecessary confrontation with the Bedouins in the Negev.

The question arises: At what point does a sovereign state, acting in its own territory on its own authority, become obligated to avoid implementing its policy for fear of confrontation with dissenting or lawless minority groups?

Maariv dismissed the plan to establish 10 communities by saying, “The tower and stockade days [of the 1930s] are gone.” Yediot Ahronot called the plan “an example of recklessness” and added: “Our problem is a tiny living space, which means we have to plan population distribution with great caution. Hopefully the warning against gradually shrinking open spaces, which is sounded the world over, will also reach the ears of our cabinet ministers.” In a world with 7 billion people, Yediot asserted, green spaces for the production of food must be preserved.

Yet the paper had no criticism of the intensive building on the infinitely smaller, much more densely populated Sharon Plain, whose land is far more fit for food production than the Negev’s rocky soil. Construction is proceeding apace on fertile agricultural land in Ramat Hasharon, Raanana, and Netanya without stirring any controversy.

The 10-locality plan was blocked. Meanwhile, the Negev’s open spaces are being closed by massive illegal construction in Bedouin areas. In institutional language, this expansion is known by the euphemism “unrecognized communities.”

Part of the reason for Israel’s loss of sovereignty in the Negev is the difficulty of enforcing law and order there. Without the renewal of Jewish settlement momentum in the land that is still available, the police and law enforcement agencies will not be able to alter the lawless reality. 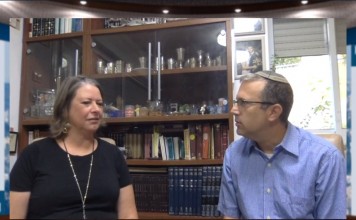