Are Jews a persecuted minority—occasionally victims of mass murder—to be pitied? Or are they a special breed of Caucasians—the whitest of the white—imbued with infinite resources of ingenuity, acumen and craftiness that enable them to better leverage their privilege?

Contrasting and interchangeable images: a timid people wrapped in prayer shawls, too weak to push their pushcarts, helplessly awaiting the next pogrom; or super-white people who furtively run the show and oppress the unfortunate?‘


The recent dustup over Whoopi Goldberg’s astonishing ignorance about how the Holocaust was, in actuality, a race war, is an example of this confusion over Jewish power. Somehow, Whoopi managed to miss all those books, documentaries, survivor testimonies, TV shows and movies, all detailing how, and why, two out of three European Jews disappeared between 1938 and 1945.

Brainwashed by critical race theory dogma, Whoopi felt compelled to remind her co-hosts and TV audience that the Holocaust was merely two groups of white people—Nazis and Jews—who didn’t like each other. The Holocaust was a mere spat among equals, “inhumanity” that took a wrong turn. After all, crimes committed by white people against one another are not racially motivated, and not especially tragic, either.

How did such warped thinking permeate the American consciousness? Our Founding Fathers would be surprised by this more sinister and less benevolent perception of Jews.

Before America’s founding, a Polish-Jewish immigrant from Philadelphia, Haym Solomon, was among the Sons of Liberty prepared to take arms against King George III. Solomon was not a marksman with a musket, however. He was a financier, a wizard in raising funds and selling bills of exchange.

George Washington always acknowledged that without this American version of Solomonian wisdom, the Battle of Yorktown in 1781 would have been lost and America would have remained a British colony. The Continental Army had completely run out of money, and General Washington once more turned to Solomon for assistance.

How’s that for a new twist on Jewish bankers—not sinister, but the epitome of patriotism.

By 1790, when Washington, then president of a new nation, wrote his “Letter to the Hebrew Congregations of Newport, Rhode Island,” he forgot neither Solomon nor the vulnerability of Jews who sought safe harbor in America. Reassuringly, he wrote the “Government of the United States, which gives to bigotry no sanction, to persecution no assistance,” welcomed them.

America had nothing to fear from Jews. If anything, Jews who found themselves in the wrong neighborhoods had much to worry about. For them, being white didn’t come with special powers.

A stereotype emerged about Jews traveling across the frontier—passive peddlers practicing their faith, maintaining their values in the unlikeliest of places. How does one find a minyan among all that Manifest Destiny? Yet, not everyone was doomed to tenement eternity and urban squalor. Some went west, to the vastness of America, not on wagon trains for a life as cowboys, but as simple, slow-moving peddlers, not unlike the origin stories of Levi Strauss and Neiman Marcus.

The typecasting of Jews on the frontier puts the lie to the cushy, exploitative lives of privileged Jewish Americans. In popular culture, Jews were forever outsiders longing for guardian angels and skeptical that they could ever assimilate among white Americans. The melting pot, after all, made for a largely unkosher stew.

Jews never figured into the binary, white- or black-hatted roles now favored by Hollywood and TV networks. The plots called for Jewish characters to be walk-ons, never leads. The Golden Age of TV, for instance, had no stories of Jews as ranchers, rustlers, outlaws or sheriffs. Jewish families did not eke out a hardscrabble existence on the open range.

Many of the cowboy westerns on TV, the classics of the genre, produced at least one obligatory “Jewish episode.” Middle America and Main Street saw Jews depicted as nakedly defenseless. College students could learn something from those episodes. If nothing else, they’d give woke professors strokes. Impoverished Jews, so clearly a minority people, yet so obviously distinct from the dominant culture of white America?

Despite all the intersectional sleight of hand that has falsely libeled Jews as oppressors at home and land-grabbers in the Middle East, it might be that the most minute of minorities, the object of such long standing historical vilification, are vulnerable still.

In a 1962 episode of “Rawhide,” co-starring a young Clint Eastwood, a Jewish peddler hondels with Indians to avoid a range war over cattle, and then marries an Indian! Wait, there’s more: Cowboys are served knishes and shout “mazel tov!”

“Bonanza,” in 1963, introduced a Jewish father, also a peddler, and his daughter, observing Shabbat in the Sierras. (Two of the four co-stars of the series, Lorne Greene and Michael Landon, were actually Jewish, but not while portraying the fictional Cartwrights.)

In 1967, “The Big Valley” depicts Milton Berle as a benighted but sly sheepherder. “Gunsmoke” aired an episode in 1973 featuring a young Richard Dreyfuss as the son of a law-abiding Jewish father who wants to take revenge against those who murdered his brother.

Each episode parallels a similar depiction of Jews in the West: itinerant peddlers, moving slowly in small wagons, living honest and faithful lives. Failed farmers. All at some point forced to confront ruffians in the most lawless and hostile of settings.

“Go West, landsmen, but the frontier is no place for anyone who abides by the ‘thou shall not kill’ commandment and who insists on keeping kosher.”

More comedically, but covering the same ground, there’s the film, “The Frisco Kid” (1979), starring Gene Wilder as a Polish rabbi trying to make it across America to lead a congregation in San Francisco, and Harrison Ford as the worldly cowboy who gets him there. So, too, in the South during the Depression in the first season of “The Waltons” (1972), a Jewish professor and his family escape Hitler, yet still feel unsafe in rural Virginia.

There are strong American messages throughout. Living in fear, like Jews, is not the American way. And refusing to carry a gun, and to use it when necessary, is often a tragic mistake. After all, God is never written into the scene to protect his or her people—whether it be in Dodge or on the Ponderosa. The impulse of Jewish powerlessness, the aversion to fighting back, is the cornerstone of each plot.

These are America’s supermen, prone to their own versions of violence, Shylocks on the prowl, among the privileged and never the victim?

Something for Whoopi Goldberg to ponder. 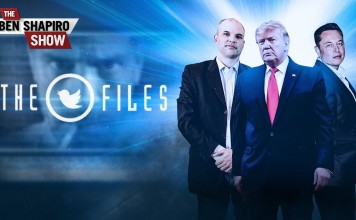