This week’s marking of International Holocaust Remembrance Day must be both a commemoration of the past as well as a beacon for the future. If the victims are remembered and the survivors honored, but the world doesn’t implement the lessons that must be learned, we are inviting a recurrence of history’s worst horrors.


One fundamental lesson of the Holocaust is that the world must be vigilant to expose and eliminate all demonization that leads to the justification of murder, whether directed against Jews or any other group.

One of the great failures of the international community has been its tolerant attitude toward the Palestinian Authority’s systematic demonization of Jews.

The pervasive Palestinian Antisemitism is the direct result of the PA’s teachings. PA President Mahmoud Abbas’s Fatah movement recently produced a propaganda video purportedly about Jewish history in Europe which it publicized on Fatah’s official Facebook page. It teaches that Jews see themselves as superior – “We [Jews] are a nation that is above the [other] nations… only we are people, and all the others are our animals” – and others as inferior: “Non-Jews… according to their worldview are snakes.” The Jews, Fatah explained, “led the project to enslave humanity” and allied with Nazis to burn Jews “to accumulate wealth.” The Jews themselves established “ghettos in order to separate from other people out of arrogance and disgust for non-Jews.” It was in the ghettos, the documentary further lies, that the Jews schemed against the non-Jews, leading to European Antisemitism: “[Jews] were hated because of their racism and their filthy behavior.”

Significantly, Palestinian demonization of Jews as having brought Antisemitism upon themselves comes from the very top of the PA leadership. It was Abbas himself who explained to Palestinians why Europeans committed massacres of Jews “every 10 to 15 years” for centuries and eventually the Holocaust: “Why did this happen?… The hatred of the Jews is not due to their religion, but, rather, due to their social role… due to their social role that was connected to usury and banks and so forth.” Thus Abbas confirmed the antisemites’ deception that Jews brought Antisemitism upon themselves.

Abbas’s appointees in the PA religious and political frameworks likewise disseminate hatred of Jews. Mahmoud al-Habbash, whom Abbas appointed to be the head of the Islamic Courts and who served as his personal adviser, taught that the conflict with Israel is not about territory but is against the Jews because they are Satan’s ally on earth, disseminating evil and falsehood. Israel is therefore “Satan’s project,” he taught.

Palestinian children are taught the same hate ideology. Children recite poems on official PA TV stating that “our enemy, Zion, is Satan with a tail,” and that Jews were “condemned to humiliation and hardship” and are “the most evil among creations, barbaric monkeys, wretched pigs.”

PA Antisemitism reaches its pinnacle by presenting Jews’ existence as a fundamental threat to all humanity. PA religious figures have worded it in various ways on official PA TV: “These are the Jews… always fighting, always corrupting, always scheming, and always plotting against humanity”; “There is no global corruption that they are not behind”; “Systematically working to incite wars and strife in the entire world”; “Humanity will never live in peace or fortune or tranquility as long as they are corrupting the land…. If a fish in the sea fights with another fish, I am sure the Jews are behind it.”

Since Jews are the PA’s designated source of all evil, everything bad that happens in the world can be traced back to the Jews. PA TV’s “expert on Israel affairs” told Palestinian viewers: “ISIS took all of its religious ideas from Judaism.” An article in the official PA daily explained that the murderous civil wars of the Arab Spring as well as the Palestinian Hamas-Fatah civil war were all Israel’s planning.

At times the PA has explicitly stated its horrific conclusion: The Jewish threat to humanity will be stopped only by exterminating all Jews. One preacher on official PA TV explained it: “These malignant [Jewish] genes and cursed characteristics continue in them. They transfer them from generation to generation. They inherit it from father to son…. Humanity will never be able to live together with them…. Our prophet [Muhammad] informed us [that] at the end of time the Muslims will fight the Jews…. Jews hide behind a stone or a tree, and the stone or a tree will say: ‘Muslim, servant of Allah, there is a Jew behind me, come and kill him’…. Allah… count them and kill them one by one, and do not leave even one.”

These are not quotes from 19th-century Czarist Russia or 20th-century Nazi Germany. These are the beliefs being taught to Palestinians by Abbas’s appointed officials and disseminated by official PA and Fatah official media.

Since killing any and all Jews is self-defense, every act of Palestinian murder is packaged as a heroic act with Allah’s stamp of approval. After a Palestinian terrorist murdered two Israeli co-workers, Abbas’s Fatah sent the murderer a message on its official Facebook page: “Allah is protecting you and taking care of you.”

When the Holocaust is remembered this week in Jerusalem, it must not be forgotten that presenting the murder of Jews as self-defense with God’s stamp of approval did not start with the PA, but was fundamental to Nazi ideology. Hitler worded it this way in Mein Kampf: “[If] the Jew is victorious over the other peoples of the world, his crown will be the funeral wreath of humanity…. By defending myself against the Jew, I am fighting for the work of the Lord.”

The international community’s decision to ignore the PA’s Antisemitism has enabled the PA to turn Palestinians into the most antisemitic people in the world.

As leaders gather this week in Jerusalem, they must announce a willingness to use all their political and financial weight to eradicate Palestinian Antisemitism, thus freeing the Palestinian population from Antisemitism’s debilitating hatred.

Anything less will make the gathering a dismal failure, a mere ceremony giving homage to the past while ignoring the present, and therefore having no positive impact on the future. 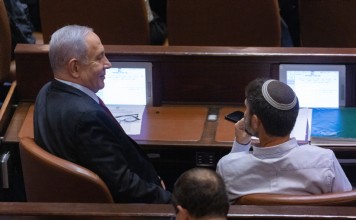