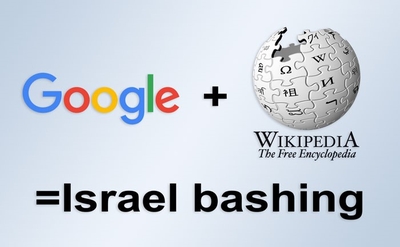 Occupation is a word that dominates most debate about Israel, but the truth is that pro-Palestinian propagandists are occupying Google and Wikipedia to keep debunked narratives alive.

This was recently confirmed when I attended a webinar featuring a physician who worked in Israel’s undercover “Duvdevan” unit, which is the basis for the popular series Fauda. She talked about her work in Gaza and on the West Bank during Operation Protective Edge.

“I thought nothing would surprise me. But many things did,” she said. The physician told the story of trying to save the life of a 2½-year-old West Bank boy accidentally run over by his father. They rushed the boy to an Israeli hospital, providing treatment along the way.

“Despite all our efforts,” she remembered, “the boy died. When I asked this father if he would donate any of his son’s organs to another child, he said: ‘Only to an Arab Palestinian child, not to an Israeli Jewish child.'”

This was a father who had just seen the enormous effort that Israeli Jews had undertaken to save his son’s life; it was a very dramatic and emotional moment. Old prejudices might have died on the spot, at least momentarily. Instead, this man’s Jew and Israel hatred kicked in immediately. The doctor was stunned by the sudden appearance of such “political realities.”

This is the kind of psychological enemy Israel is up against. And then there are the Palestinian terrorist leaders, who indoctrinate their own people and use them to carry out terrorist attacks against civilian Israelis. This fact is minimized by Western media and global leaders.

Given the world’s diabolical double standards, Israeli soldiers stand accused of atrocities they did not commit, while Palestinian terrorists—Hamas, Palestinian Islamic Jihad, Palestinian Liberation Organization, Fatah, the Popular Front for the Liberation of Palestine—who torture, kidnap, hijack, use human shields, including children, are still viewed as innocent victims.

Contrary to public opinion, the IDF is exceptionally ethical, and military leaders from other countries have attested to it. Israeli soldiers are haunted by any accidental civilian deaths and grief-stricken by the deaths of their own comrades. Unlike the Palestinian terrorist leaders, they do not glorify death and they mourn each life lost in necessary battle. This must be said, not once, but over and over again to counter the monstrous propaganda against Israel.

Yet, poisoned anti-Israel propaganda continues to overwhelm all platforms. For example, remember Israel’s alleged 2002 massacre of civilians in Jenin? It generated international headlines.

But it never happened.

For nearly two years, Arab Palestinian terrorists had been attacking Israeli civilians non-stop. The death toll and the numbers wounded were very high. In March 2002, terrorists murdered 100 Israeli civilians. On March 27, a suicide bomber blew himself up inside the Park Hotel in Netanya, just as Jews were seated for a Passover Seder. Thirty people were killed, mostly elderly. Another 140 people were injured.

This was a final straw. Reservists voluntarily flew home to Israel from all over the world. Many of the suicide bombers attacking Israeli civilians had come from Jenin.

The IDF sent soldiers into Jenin. They went from one booby-trapped house to another, all while under fire, just so that Israel would not be accused of bombing civilians from the air or committing a massacre.

Reports from the Palestinian side described a wanton Israeli killing fest, leaving hundreds of innocents dead. Some said thousands were killed. The entire town, they claimed, was destroyed.

In truth, 56 Palestinians died, most of whom were armed. Israel lost 23 soldiers. Despite that, if someone wanted to look into it now and Googled “Jenin,” here is what they’d find.

The first five pages about “Jenin” feature 27 anti-Israeli articles promoting a false history and only seven articles that tell the truth about what really happened.

Search Google for “How many Palestinians died in Jenin, 2002,” and here’s the first thing you see today: 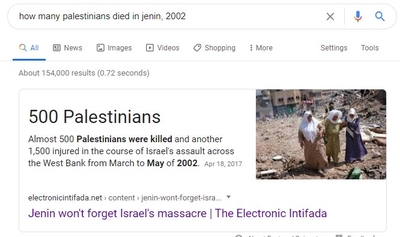 Here’s what’s important. The propaganda about the non-massacre in Jenin is not confined to 2002-2003. The falsehoods continued throughout the 21st century.

As of 2017-2018, Islamist propagandists Yvonne Ridley and Ilan Pappe continued to engage in this blood libel.

Just last week, Ridley referred to the Jenin massacre-that-wasn’t as one of its “biggest war crimes of this century.”

There are more than half a million dead Syrians that might take issue with that.

But propaganda like Ridley’s inevitably leads to real massacres and lynchings—of Jews and Israelis.

Part of the problem is Google’s linkage to Wikipedia, which is fully dedicated to an anti-Israel and pro-Palestine position. For example, look at what pops up when you search the phrase “Palestinian terrorist groups” today:

The first thing you see is a Wikipedia summary of “Palestinian political violence.”

Like the so-called “massacre” at Jenin, the al-Dura Affair concerns the alleged cold-blooded murder in 2000 of a 12-year-old Palestinian boy by Israeli soldiers at the Netzarim junction. Yasser Arafat had again rejected peace and launched his long-planned intifada against Israel. The Muslim world embraced al-Dura as a martyr and ran his photo over and over again in the media, on t-shirts, mugs, posters, etc. They still do.

Journalist Nidra Poller describes the al-Dura matter as a “long range ballistic myth.” For many years, the entire world believed Israeli soldiers deliberately murdered a child. Even the IDF quickly ventured an apology, which it later retracted—all due to the heroic and persistent work undertaken by Poller and by Richard Landes, Esther Schapira, Philippe Karsenty, and Nahum Shahaf, an Israeli physicist.

Over time, it became clear that if al-Dura was shot at all, it was not by Israelis.

Although Google continues to automatically link to Wikipedia, it eventually included the fact that a controversy about what happened actually exists. However, the controversy section appears at the very end of the Wikipedia entry, long after the false narrative has had its way with most readers.

The 2019 Gaza protests on the Israeli border provide the latest example of Palestinians instigating violence, only to grossly exaggerate the Israeli response.

The anti-Israel group Jewish Voice for Peace joined a chorus of voices claiming that Israel was gunning down peaceful protesters. “Israeli snipers,” it claimed, were deliberately targeting “children and persons with disabilities,” among others.

It turns out the overwhelming majority of casualties were members or affiliates of terrorist organizations. About half of those killed were Hamas members and affiliates.

We learned this from Hamas officials.

But search “Gaza border protests,” and these facts are nowhere to be seen.

It is clear that this deadly disinformation campaign will never end, but those who direct traffic on the internet should not aid and abet this crime. 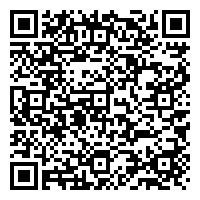