Despite this “law,” Palestinian Arabs selling land to Jews is an ongoing problem for the PA.
For example, in December 2018, The Jerusalem Post reported that 44 Palestinian Arabs were arrested for selling property to Jews. One of them, a Palestinian-American, was sentenced to life imprisonment — and only with pressure from both the US and Israel, was he released and deported 3 weeks later.
This came from the Palestinian Authority — Israel’s “peace partners,” who are theoretically dedicated to the idea of a two-state solution that will bring about a Palestinian state living in peace side-by-side with the Jewish State of Israel.
This dedication to a two-state solution might be considered progress, since there was a time when even suggesting the idea of an Arab Palestinian state existing side-by-side with Israel could get you killed.

Hussein Aboubakr Mansour, an Egyptian political dissident, tweets about Fatah’s former opposition to a Palestinian state next to Israel: 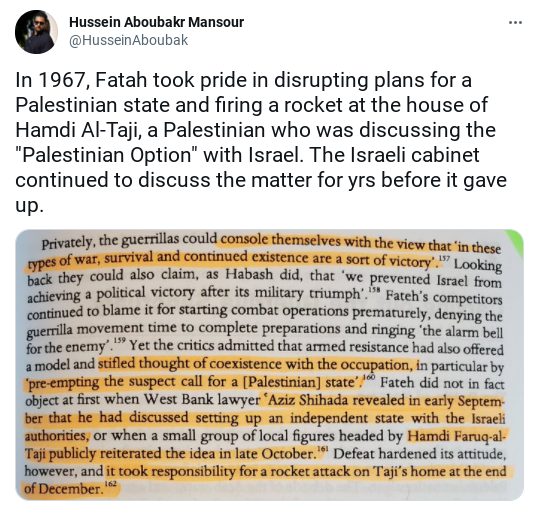 Quoted from: Armed Struggle and the Search for State: The Palestinian National Movement, 1949-1993 by Yezid Sayigh (emphasis in the original tweet)
Similarly, Avraham Sela writes in The PLO at Fifty: A Historical Perspective. Contemporary Review of the Middle East:

Even before attaining a collective recognition of the Arab states as the sole representative of the Palestinian people, Fatah sought to silence local public figures (by force, if necessary) who made public statements concerning the future of the Occupied Territories, challenging the PLO exclusive authority as the ultimate Palestinian policymaker. Tensions and differences between the ‘outside’ PLO and public figures in the Occupied Territories reached a boiling point already in the late 1960s resulting in threats on the lives of Hebron Mayor Muhammad Ali al-Ja`bari, and publicists Hamdi al-Taji al-Farouqi and Muhammad Abu Shalbayah, and the lawyer Aziz Shehadeh (who was eventually assassinated)—all avant-garde advocates of the idea of a Palestinian state within the Occupied Territories [emphasis added]

There were deep divisions among the Palestinian Arab leadership on the issue of establishing a Palestinian state.

The example of West Bank lawyer Aziz Shihada (Shehadeh) is instructive.
Following the Six-Day War, Aziz Shihada was, in fact, one of the first to suggest the creation of an independent Arab Palestinian state that would exist alongside Israel in the context of a peace agreement with the Jewish State.
Advertisement


According to The New York Times, Shihadi “became the first Palestinian to draft a proposal for a two-state solution to the Israeli-Palestinian conflict” — and was threatened with death:

In broadcasts from their Damascus exile, the [Palestinian] leadership addressed him directly: ”A.S., you are a traitor, a despicable collaborator,” it announced over the airwaves. ”You shall pay for your treason. We shall eliminate you. Silence you forever.”

As noted above, Fatah was not opposed to the idea of a separate Palestinian state at first. But as it turned out, Shihadi’s treatment by his fellow Palestinian Arabs is a precursor to today’s all-out refusal to have anything to do with Israel that would imply normalization:

The Palestinian lawyers’ union refused to practice before Israeli military courts in an act of protest against the occupation. But there were no other courts to which Palestinians could appeal, and Shehadeh felt that this refusal to challenge Israel under its own rules simply gave the Israelis a free hand. He insisted on defending Palestinians against land seizures and arbitrary treatment at the hands of the military. For his efforts, he was disbarred for life by his own union, which subsidized Palestinian lawyers on the condition that they not practice their profession. [emphasis added]

For all his support for a Palestinian state side-by-side with Israel, Shihadi still saw Israel as the opposition. But then again, he was wary of Jordan as well.
Prior to 1967, Shihadi was imprisoned because of his opposition to The Occupation — in this case, Jordan’s occupation:

Shehadeh, whose first name Aziz means ‘the dear one,’ was imprisoned several times by Jordan’s King Hussein because he viewed Jordanian control of the West Bank after 1948 as occupation. [emphasis added]

In the end, Shihadi was killed in 1985, and it was never known whether his murder was politically motivated or because of a legal case he had taken on.

This was 4 years after Sadat was assassinated in 1981, in part for his having made peace with Israel. Later, there were Palestinian representatives who still condemned Sadat as a traitor:
Another twitter account, CasualtiesOfTheDay, also tweeted about the Palestinian rejection of normalization. He quotes from the book, My Home, My Land: A Narrative of the Palestinian Struggle, a memoir by Salah Mesbah Khalaf, also known as Abu Iyad. Abu Iyad was deputy chief and head of intelligence for the PLO and the second most senior official of Fatah after Arafat, before being assassinated in 1981, by the Abu Nidal’s organization.
In his memoirs, Abu Iyad wrote that the idea of a Palestinian “mini-state,” even with the ultimate goal of a unified Arab state of Palestine, was controversial within Fatah.
He drew comparisons on the one hand with Zionist leaders such as Ben Gurion who accepted the 1947 partition plan in the short term — with the Vietnamese, North Koreans and East Germans on the other: 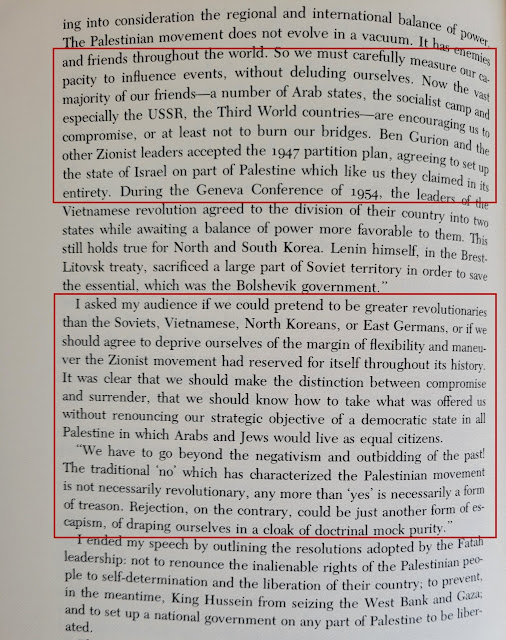 Abu Iyad claims that it was not just moderates like Shihadi who talked about a Palestinian state in the “West Bank” and Gaza following the Six-Day War, but within the Fatah leadership as well. But Faruq Qaddumi, a member of the PLO leadership was in the minority. Not only the idea of a mini-state, but according to Abu Iyad, “the strategic objective of a democratic state in all Palestine didn’t have everyone’s support either”: 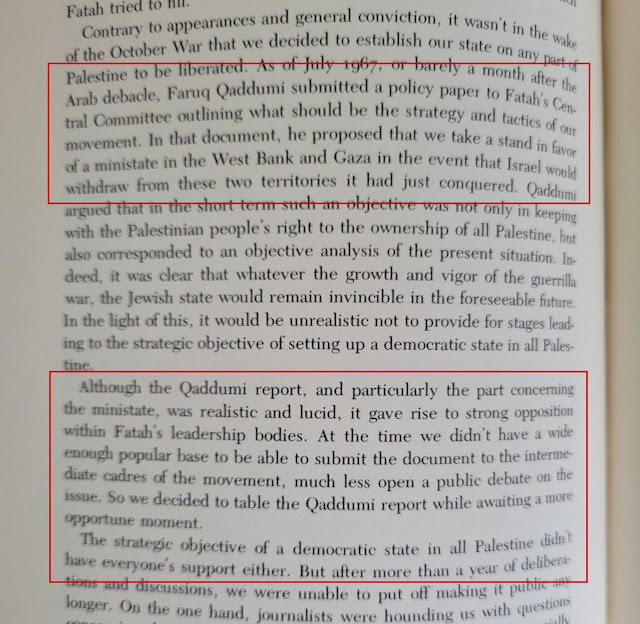 Normalizing relations with Israel remains a problem for leaders of the Palestinian Arabs today, just as it was then — even if such normalization is considered as merely a short-term goal towards eventual control over all of Israel.
This is highlighted by the periodic claims of unification between Fatah and Hamas, a neat trick if indeed Abbas is committed to the two-state solution when Hamas is decidedly not.
If anything, their attempt at unification shows that both groups want Israel’s destruction, just by different means and different speed, and remains a priority above and beyond the creation of a Palestinian state.
Advertisement 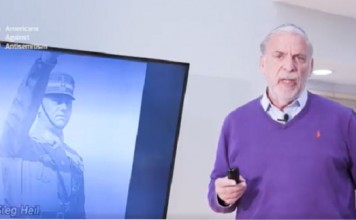 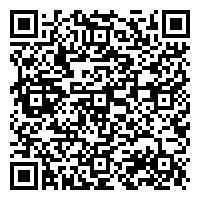