How should a Jew conduct his/her life? We have always been told to daven to HaShem for everything we need but also to make the necessary effort to “make it happen”. So, what comes first? Do we first pour out our hearts to HaShem or do we take action and then daven? This question has always been on my mind since I strongly believe that one must do both. HaShem is our guiding light. He directs our every move and decides what happens – this is why we pray to Him. Yet, prayer is not the only thing we do. We are a nation of action. Mordechai and Esther didn’t just pray… they devised a very serious plan and saw it through, step-by-step. Yet, they also fasted and davened. The same technique of prayer/action was used by the Maccabees.

The source for this is the Torah itself. When Am Yisrael went to war against Amalek (shortly after crossing the sea) Yehoshua bin Nun led the nation in battle while Moshe raised his hands. The Biblical commentator, Yonatan ben Uziel, states that Moshe was praying and inspiring Am Yisrael to do the same… a clear example of praying and also acting.

I found the answer in the fantastic biography of Rav Noach Weinberg ztz”l, written by Yonoson Rosenblum. (Note: If you haven’t read this book, run to the bookstore ASAP and get a copy! It will inspire you, motivate you and shake you to your core.) Rav Noach taught a very special lesson regarding the famous episode of when Yaakov prepared to meet Eisav; (pages 190-191) “As Yaakov awaited his dreaded meeting with his brother Eisav, explains Rashi, he prepared himself in three ways; for war, by sending presents and with prayer. Shouldn’t Yaakov’s first response have been to pray? Rav Noach asked. Isn’t that what religious people do first – seek HaShem’s assistance and express their dependence upon Him? From here Rav Noach extracted a startling principle. When a person is in a difficult situation, he has to understand that the situation itself contains a message from HaShem that he needs to change in some way. Before prayer can be effective, one must first show HaShem that one hears the message and is prepared to make the necessary changes. Yaakov prepared for war in order to show that he had heard the message.”

Please allow me to stress those words – with some commentary added: “Before prayer can be effective” – which means that if you want your davening to work, there’s something you need to do first… “one must first show HaShem that one hears the message” – OK, HaShem, I have assessed the situation and I know what’s going on… “and is prepared to make the necessary changes” – I will first act, to show you, HaShem, that I not only realize what’s happening but that I am ready to take the proper action. This is why Yaakov first prepared for war and gifts and only then prepared with prayer.

What does this mean to us? Here’s one example: Each week – during Shemoneh Esrei of Mussaf on Shabbat – we daven the following words to HaShem: “May it be Your will, HaShem, our G-d and the G-d of our forefathers, that You bring us up in gladness to our Land and plant us within our boundaries” (ArtScroll translation)– In very simple words, that’s a prayer for HaShem to bring us to Eretz Yisrael. Every Jew says those words… but, as we just learned, in order for our davening to be effective, we first need to act. Therefore, start the ball rolling and be like Mordechai and Esther; make a plan. It doesn’t have to be a “get rich quick scheme” or a “lose 50 lbs in 20 days diet”. It can take time – and with proper planning it should take time… but take the actions necessary to start building your future in Eretz Yisrael.

Yes, Jews are people who daven. We cry and pour out our hearts to our Father in Heaven… but first we need to act. Not by “putting on an act” and certainly not by “acting out our prayers”. Real actions with a real time-line and a real plan. May HaShem see our actions and then answer our prayers. 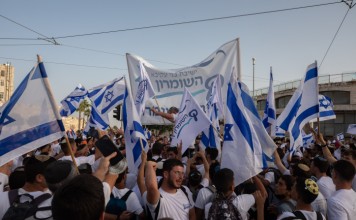