The school teaches Hebrew to all its students—about half of them Jewish. Classes on other traditional public-school subjects are also taught in Hebrew. The school does not teach any subjects on Jewish faith, but does offer information on Israeli culture, history and national holidays, which often overlap with Jewish holidays.

“We are not a Jewish school. We are the only public-school network in North America that teaches Hebrew to kids of all backgrounds,” says Valerie Khaytina, chief external officer of Hebrew Public.

The network—with more than 3,000 students—was started by the Areivim Philanthropy Group and the Steinhardt Philanthropic Foundation in 2009 to provide a free alternative for parents and students searching for an education that could provide Jewish identity, but without the burdensome costs of a private Jewish day school, which can range anywhere from $10,000 to over $20,000 per year.

“The Areivim group sought to find the next big idea to actually make Jewish education affordable for all children,” explains Khaytina. “At around the same time, they got to learn about the concept of charter schools. And they said, ‘OK, that sounds great.’ Then they learned that to be a charter school, you have to be open to everybody. So, there is no religion in our schools.” 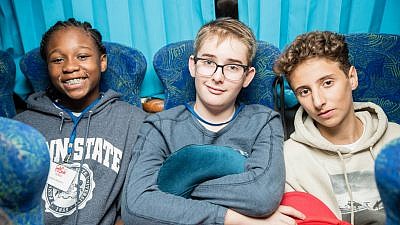 For Zhara Adeyemi, an eighth-grader in the Mill Basin Hebrew Language Academy Charter School in Brooklyn, N.Y., she and her parents simply wanted “a good school.”

Zhara, who volunteered the fact that she is not Jewish, says she speaks Hebrew “pretty well.”

She appreciates her “wonderful Hebrew teachers,” as well as the international feel of the school. “I get to meet new people. My friends’ families are from all over the world. I have Argentinian friends, Russian friends, Caribbean friends.”

Zhara, who spoke to JNS on the final day of a class trip to Israel, says “Israel is beautiful. We really enjoyed being here,” noting that picking olives and hiking on Mount Carmel were personal highlights.

She says once she was at the park, and a woman’s child fell, but the mother didn’t see because she was on the phone, so Zhara said something to her in Hebrew, and “she was pretty surprised.”

As to whether she’ll be able to use her Hebrew in the future, Zhara says she’s “not too sure.”

‘About history and culture, about global citizenship’

“I don’t know if I would say I am fluent [in Hebrew], but I’m pretty good in it,” he says. “But trust me, there are some kids whose parents come from Israel, and they are way better than me.”

He likes the high-quality teachers and the friends he has made. “I’ve been able to meet a lot of kids I can relate to. A lot of Russians,” says Viktor. “There’s a lot of Russian kids in Brooklyn.”

Viktor is Jewish on his mother’s side, but his father is Christian. “We celebrate Hanukkah and New Year’s. We do not celebrate Christmas.”

He says that in addition to Hebrew language, the students also learn about Israeli culture.

As for his first trip to Israel, Viktor was pleasantly surprised. “Israel is very nice, actually,” he says while calling it “very different” from what he expected. “I was thinking that Israel was a major desert.” He adds that he would “definitely” go back because “there are so many things to see.”

Other kids on eighth-grade trips, Viktor says, “go to the Appalachian trail. We go to Israel.” 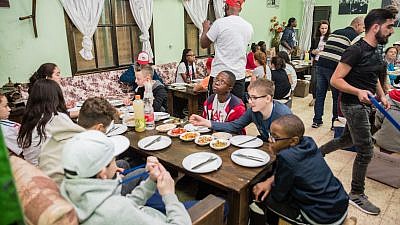 Part of coming to Israel for the students is the immersive Hebrew experience, a tenet of Hebrew Public’s bilingual studies. “We got to practice our Hebrew a bunch on this trip,” says Viktor.

Khaytina tells JNS that for many Jewish families, the school’s appeal is “the idea of teaching kids Hebrew, and about the history and culture of Israel—about global citizenship.”

Yet for many others, “sending their kids to the school is simply a better choice,” she says. “Unfortunately, many neighborhoods in the United States, the school networks are not so great, and families just want a better school.”

“For other families, it is the emphasis on a foreign language, and it can be any foreign language. It could be Hebrew, it could be Chinese, it could be Spanish,” adds Khaytina. “For some families, they like that Hebrew is the language of the Bible, so even though we teach modern Hebrew, people want their kids to understand it and to read the Bible.”

‘Making sure to respect and understand others’

Despite being a public school open to all students regardless of faith, teaching Hebrew comes with its stereotypes, both good and bad.

“When we first opened our newest school in Brooklyn last year, somebody drew swastika sign in front of the school. So even though we are not a Jewish school, we are extremely vigilant about security,” says Khaytina, who joined the students on the Israel trip. “In light of what just happened now in Pittsburgh, we released a special statement that we have reinforced all of our security efforts.”

“Even though we are not Jewish, the minute people hear Hebrew, we can become a target,” she acknowledges. On the flip side, she adds, “and sometimes, when parents hear that the school is Hebrew, they associate Jews with good education, and they want to send their kids.”

For example, she says “we hear a lot from our African-American families; they know that Israel is a leader in high-tech and innovation, so they view it as a chance for their kids to come here, learn here.” 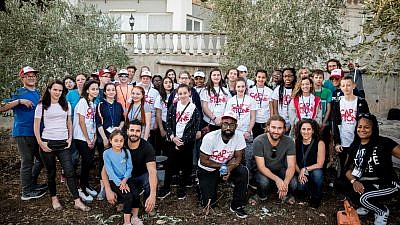 As for the benefits of this experiment, which has taken more than $20 million in philanthropic funding so far, it’s still too early to tell. The schools each open with a kindergarten and first-grade class. Last year was the first year that the Mill Basin school—the first school to open in the network–had a graduating class.

According to Khaytina, time will tell whether exposing children to Hebrew language, and Israeli history and culture for nine years will provide a better connection than other short-term efforts to turn Jews and non-Jews alike into Israel supporters. “These kids are growing up learning about Israel, and understanding about Israel as a country.” 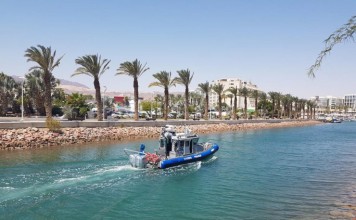 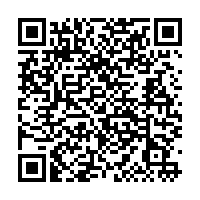