Everyone is entitled to a lawyer, and while this writer personally sees Rep. Ilhan Omar of Minnesota as an enemy of the Jewish people on par with any barbaric Muslim terrorist, I can imagine what a defense attorney might say in her defense.

He might argue that people are being unnecessarily critical of her, treating her as if she is another anti-Semite in the mold of Jeremy Corbyn or David Irving – which is not fair. After all, she is being criticized as if she should know better than to spout classical anti-Semitic delusions, but she really doesn’t.


You see, she is not at all like those two Englishmen. In the West, spouting anti-Semitic conspiracy theories makes you a whack job, a nutcase, a kook. Not in Ilhan’s culture. She spent her formative years in Muslim Somalia, where anti-Jewish ideas constitute mainstream thinking. Anyone who doubts me should visit the websites of MEMRI or Palestinian Media Watch and check out its video archives of Middle East sermons about Jews.

In the West, the presence of Jews has resulted in non-Jews understanding that the Jewish people has suffered throughout history due to hallucinatory accusations that Jews maintain dual loyalties or control the world with its purse strings. Holocaust awareness has also contributed to a culture in which anti-Semitism is considered unacceptable.

But not in Somalia. One should believe Omar when she says that she was surprised that her comments hurt people’s feelings. After all, it is common knowledge in her native land that Jews are evildoers. Ayaan Hirsi Ali, who lived in Saudi Arabia for a while, reported that everything that goes wrong in that country – power outages, traffic accidents, bad weather – is the Jews’ fault. Never mind that no Jews live there.

Many people in the Muslim Middle East even doubt that the Holocaust took place. It is just another Jewish trick, a lie, to make people feel guilty and do their bidding. So it’s simply not fair to be angry at Omar for her views. She is merely echoing her culture.

Omar complained that “Jewish colleagues…[think] that everything we say about Israel to be anti-Semitic because we are Muslim.” Indeed. An objective, sober, in-depth investigation of Islam leads to the conclusion that Islam is actually a form of anti-Semitism.

The very name Islam alludes to this fact. It means “submission,” alluding to Abraham submitting to G-d’s command to bind his son for a sacrifice. But Muslims claim the Jewish version of this story is a lie. It was Isma’il (their mispronunciation of Ishmael) who was tied up, not Yitzchak, they say. We claim the binding took place in Jerusalem, but that too is a lie, according to Ilhan’s people. It took place in Mecca. There are dozens of other Jews who appear in the Koran whose stories are clearly pilfered from the Bible and re-told, all of them distorted.

The Muslims, of course, believe the Jews purloined and perverted Islam’s text (never mind that the Five Books of Moses were transcribed some 2,000 years before Muhammad was born). Muslims believe Musa (their mispronunciation of Moshe) did not descend Mt. Sinai with the Jews’ Torah, but with the Koran! When he reached the bottom of the mountain, a wicked nation, who began life as pigs and apes, took it away from him and re-wrote it. When Muhammad came into the world, he restored the original, authentic text so that – to this very day – the Jews follow a Torah that is a forgery, according to Muslims. No wonder the Koran describes Israelites as a believer’s greatest enemy.

So, yes, it is not right to berate Ilhan Omar for being who she is. Criticizing this African Muslim woman as if she should know better is simply unfair. Yes, she is an outlier in the Judeo-Christian West, but not in the Islamic East.

To criticize her is to criticize Islam as a whole, and that would be politically incorrect, and no enlightened, multicultural progressive who believes all religions are of equal worth would want to be accused of Islamophobia.

Ilhan Omar is no aberration among Muslims. She is a normal Muslim woman who never assimilated into American culture. So, give her a break. She’s just following her religion. 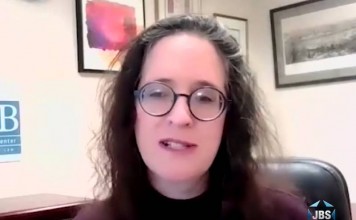