The recent reports of the assassination of Abu Mohammed al-Masri, al-Qaida’s second in command, who was reportedly killed in an Israeli intelligence operation in Tehran during August, are certainly welcome.


To conduct such an operation in heart of the Islamic Republic, against a leader of one of the most prominent global terrorist groups is a tremendous success and demonstrates Israel’s continued ability to stop attacks taking place abroad and the Jewish State’s long arm in seeking out and destroying those who seek its people harm.

However, it stands in remarkable opposition to Israel’s policies against its enemies closer to home.

The leaders of Palestinian terrorist groups, like Hamas and Islamic Jihad, but also groups associated with Fatah, have surprising immunity.

In Israel, we are far too used to witnessing images of senior leaders, like Ismail Haniyeh, giving speeches out in the open or touring areas in Gaza. These pictures, coupled with the almost weekly barrage of rockets coming from these exact same areas with a limited response from Israel, are baffling.

In fact, at this very moment, we understand that Israel is attempting to negotiate a truce or long-term ceasefire with Hamas, an organization dedicated to the violent destruction of Israel. The agreement, according to all reports, will not force a surrender on this bitter enemy of Israel, nor ensure it disarms or hand over its Israeli captives. It will treat Hamas as an equal and be largely dictated to as per the final agreement, all in the cause of some temporary illusion of quiet on Israel’s southern border.

Here we see a bitter dichotomy.

Those who threaten Israeli interests and the Jewish People abroad are dealt with appropriately before they can strike and shed blood. Those who threaten millions of Israelis within Hamas or Islamic Jihad’s rocket range are negotiated with and acquiesced to.

Of course, it is not easy to target Hamas or other terrorist leaders in Gaza or Judea and Samaria, but one would think it would be a lot tougher to do so in Tehran.

Furthermore, Israel has history when it comes to assassinating Hamas leaders in Gaza. In 2004, it killed two of Hamas’ leaders and co-founders, Sheikh Ahmed Yassin and Abdel Aziz al-Rantisi, when helicopter gunships fired on them two months apart.

So, even though Israel removed its military installations and communities in 2005, the previous manner of assassination can still be carried out without a presence in the Gaza Strip.

What accounts for the difference?

Perhaps, while the Mossad is built especially for these types of operations to strike at one’s enemy, the IDF has been molded into a defensive rather than an offensive instrument.

More likely, however, is that Israel’s political and decision-making leadership is very much interested in maintaining stability and the status quo with its immediate geographic enemies. It has shown that it can stand the drip of rockets, and even the loss of life, and it will react with the utmost restraint, which usually entails bombing some empty buildings and using verbal threats until the next round.
Assassinating an enemy leader or taking other steps towards defeating one’s opponent could spiral out of control and force Israel into a lengthier confrontation, one which it does not seek.

Killing an al-Qaida leader in Iran is highly unlikely to impact on the day to day interests of the nation. It is controlled and relatively clean, just the latest in a long history of operations in the shadows where the rules are known, and the end is calculated and understood.

There are of course risks, but they are usually quantifiable.

Hamas and Islamic Jihad have survived for so long because they respond, instantly and disproportionately, and they decide the manner, length and intensity of the conflagration.

Israel has remained on the front foot regarding distant foes, it has been forced onto the back foot by those on its direct borders. The Jewish State’s enemies know full well that the kind of operation undertaken in Tehran in August is not on the table and unlikely to be placed there any time soon, despite the bravado.

Israel can not defeat its neighboring enemies, not because it is incapable, but because it does not want to.

This needs to change. If there were operations against terrorist leaders who sit directly on Israel’s borders, the equation will change. Victory can be sought and attained, enemies can be suppressed and defeated.

It is merely a matter of will. 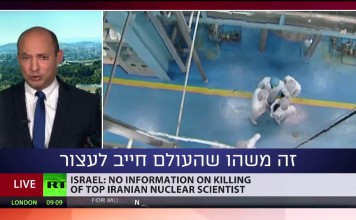