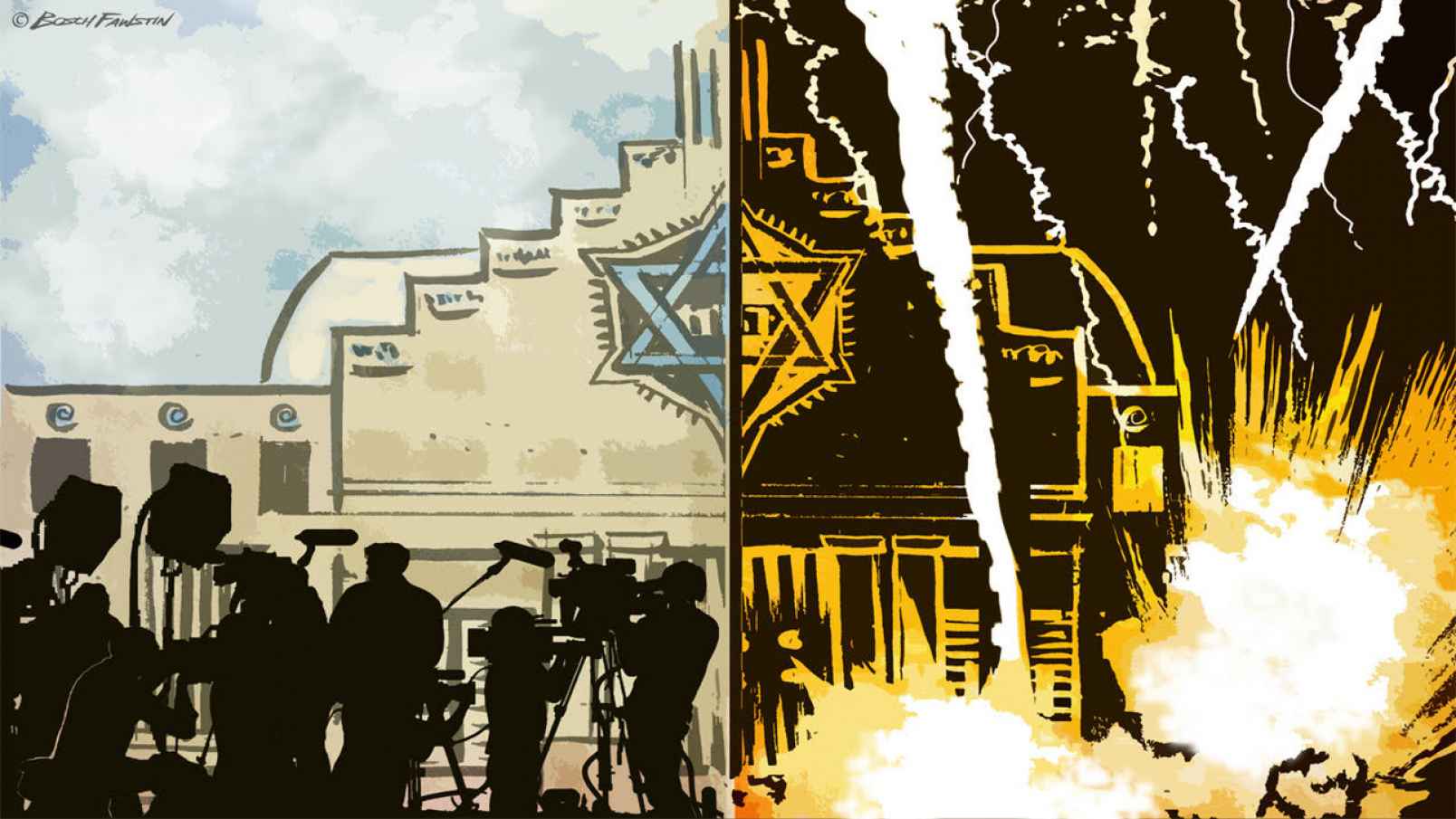 When a Neo-Nazi gunman opened fire in a California synagogue, his targets included 9-year-old Noya Dahan and her uncle, Almog Peretz.

The Dahan family had moved to California from Sderot, an Israeli city a mile away from Gaza populated mostly by Jewish refugees from Muslim countries, which had become a symbol of life under rocket fire.

Obama visited Israel when he was running for office, and stopped by Sderot. He met a boy who had lost his leg to a rocket attack, saw a collection of rockets that had fallen on Israeli homes, and told the locals, “if missiles were falling where my two daughters sleep, I would do everything in order to stop that.”

Israel Dahan, Noya’s father, had described leaving Israel after a rocket fell on the family’s house.

After the shooting at Chabad of Poway, Almog Peretz told reporters that his experience in Sderot, where residents may have minutes to get children to safety before a rocket hits, had prepared him to save the children being shot at in the synagogue. “This is sad, but I am originally from Sderot, so we know a bit about running from the Kassam rockets.”

A little over a week after the Poway shooting, rockets are once falling on Sderot.

Once again, the walls of a Sderot kindergarten were gouged by shrapnel. Photos showed debris and holes in the wall above a blackboard reading, “My Israel”.

Moshe Feder, a 68-year-old man, was driving near Sderot when a Russian anti-tank missile struck his car. When paramedics arrived, they found the father and grandfather bleeding to death next to his vehicle.

Hamas then published a video of the successful strike by the anti-tank missile on a passenger van.

A co-worker described him as “the kind of manager who took care of everyone, both those who worked with him and those who did not.”

When a Neo-Nazi gunman shot at Noya Dahan, everyone condemned it as a crime. But when Hamas shot a rocket at a kindergarten, the media reactions have ranged from praise to equivocation. Media accounts have routinely refused to identify Hamas as the perpetrators of the attack, claiming instead that Israel is at war with Gaza, to discuss the 600+ rockets fired on Israel or mention the Israeli deaths.

But is there really a difference between trying to murder Jewish children in California or Israel?

How would Muslim terrorists trying to kill Noya in Sderot be more morally acceptable than her attempted murder in Poway?

Had Moshe Feder been shot while praying in the Chabad of Poway on the final day of Passover, he would have been considered an innocent victim. But because he was instead driving a van near Gaza, the media erases him, ignores his murder, or describes its perpetrators as militants, not murderers.

Rabbi Pinchas Menachem Prezuazman became the latest of the many American citizens who have been killed by Islamic terrorists in Israel. The New Yorker was on his way to pray in a synagogue when a rocket hit. He became the fourth and final Israeli casualty of the Islamic terror rockets in this battle.

As of this writing, not a single mainstream media outlet has taken the time to mention the name of a United Stated citizen and a rabbi murdered by Islamic terrorism.

Had Rabbi Prezuazman been killed on the way to a synagogue in California by a Neo-Nazi, we would all know his name. There would be interviews with his family and photos splashed across CNN.

But he was killed on the way to a synagogue in Ashdod, Israel, by Islamic terrorists.

And so the media has decided to bury his name, along with his body, in its deepest news vaults.

The media’s message is that Jews murdered by Neo-Nazis in a synagogue are worthy of sympathy, but Jews murdered on the way to synagogue by Islamic terrorists don’t deserve compassion or mercy.

The former are innocent victims while the latter are politically inconvenient to the media narrative.

Nobody in the media is calling on Twitter to take down Hamas’ official account on the site.

Facebook’s recent wave of deplatforming left intact the Facebook page of Hamas leader Khaled Meshaal where he declares that, “Just as Islamic Iran defends the rights of the Palestinians, we defend the rights of Islamic Iran. We are part of a united front against the enemies of Islam.”

(Another Facebook profile with Meshaal’s name and picture was only used to play online poker.)

This obscene double standard isn’t about killing Jews. It’s about who does the killing.

The media would like us to believe that it cares about anti-Semitism. Its conduct shows that’s a lie. It not only defends politicians like Rep. Ilhan Omar and Rep. Rashida Tlaib when they engage in anti-Semitism.

It defends Islamic terrorists when they murder Jews. It covers for them and whitewashes their crimes.

The New York Times and the Washington Post have published a dozen different defenses of the Muslim Brotherhood in the last two weeks. They have yet to do a story about the Rabbi the Brotherhood killed.

And the odds are good that they never will.

Both outlets have transformed Jamal Khashoggi: a Muslim Brotherhood terror apologist working as a lobbyist for Hamas’ Qatari masters, into a saint. Khashoggi was an anti-Semite who had praised and celebrated Hamas. Like the Chabad of Poway gunman, he believed that the Protocols of the Elders of Zion was an actual document of a Jewish conspiracy. He even appeared to flirt with Holocaust denial.

The manifesto by the Chabad of Poway gunman closely echoes many of the same themes as the Hamas charter. Both depict Jews as a race of malignant plunderers who must be exterminated by any means.

But the media has a double standard on bigoted killers who believe that Jews must be wiped off the face of the earth depending on whether they’re fascists or Islamofascists.

You can believe, in the words of the original Hamas charter, that “Judaism and Jews” are the enemy, that Jews are behind the “drug trade and alcoholism”, and that the Jews will ultimately be exterminated.

And you’re still a ‘militant’ as long as you’re a Muslim. Otherwise you’re a horrible bigoted monster.

If you’re not a Muslim, believing these things means that you should be banished from social media. But if you are a Muslim, then sanctioning those same beliefs by listing the Muslim Brotherhood as a terror group, according to a Washington Post editorial, would “make all Muslims scapegoats”.

Opposing the murder of Jews only when you disagree with the other political views of the murderers isn’t opposition to anti-Semitism.

The double standard that stretches across the 7,600 miles that separate Sderot and Poway is the measure of the media’s cynicism, its anti-Semitism, and its complicity in the murder of Jews.

When you only oppose those anti-Semitic murderers who don’t share your politics, you support murder.

The media doesn’t oppose the anti-Semitic murder of Jews. It opposes Neo-Nazis. When killer with the same view of Jews, but who are allied with the progressive movement, kill Jews, that’s not a problem.

Judith Butler once observed that, “understanding Hamas, Hezbollah as social movements that are progressive, that are on the Left, that are part of a global Left, is extremely important.”

Understanding the global Left as a murderous anti-Semitic movement is extremely important.