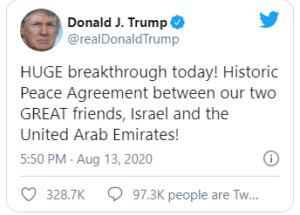 The Egyptian-Israeli peace treaty of 1979 came after five major wars between the two states in less than three decades. The Israel-UAE normalization deal, by contrast, is between two countries that do not share borders and have never been to war with one another. This is not a peace between governments or rulers, as are Israel’s peace agreements with Egypt and Jordan. It is a peace between citizens. Moreover, it indicates that the Palestinian cause is of little concern to the UAE and is no longer an obstacle to peace between Israel and Arab states.


Former US president Jimmy Carter helped broker the peace agreement between Israel and Egypt in a completely different set of circumstances in the Middle East. In his new book Camp David and the Remaking of the Middle East, Craig Daigle says, “For Carter, a comprehensive peace agreement was not just the right thing to do, but he believed it would improve U.S.-Soviet relations and strengthen the U.S. position in the Arab world.”

President Donald Trump has a different vision for the region. He said the deal would “lead to greater cooperation on investment, tourism, security, technology, energy, and other areas while the two countries move to allow regular direct passenger flights, open embassies, and trade ambassadors for the first time… Now that the ice has been broken, I expect more Arab and Muslim countries will follow the United Arab Emirates’ lead.”

For PM Benjamin Netanyahu, the Israel-UAE deal is a huge win and a validation of his “peace for peace” doctrine. With the agreement, for which he made the concession of postponing Israel’s planned application of sovereignty to parts of the West Bank, he has improved Israel’s ties with the West as well as with much of the Arab world.

The Israel-UAE deal is also a major success for President Trump’s Middle East doctrine. It has breathed new life into his “Peace to Prosperity” plan, which was engineered by his adviser and son-in-law Jared Kushner. Congressman Gregory W. Meeks, the senior member of the House Foreign Affairs Committee, said, “The agreement between Israel and the UAE to officially establish diplomatic relations marks a significant milestone for the region, bolstering and promoting stability and cooperation in the Middle East.”

The Israel-UAE deal will establish a new era of collaboration in the Middle East. In addition to joint efforts to counter Iranian influence and Islamist groups like the Muslim Brotherhood and Hamas, the Israel-UAE relationship will involve bilateral trade and tourism, the sharing of military intelligence, medical collaboration, and the positioning of the UAE as a diplomatic leader in the region.

At 8:03 pm on November 20, 1977, President Anwar Sadat of Egypt stepped onto Israeli soil at Ben‐Gurion International Airport. The time and date will be recorded once again when Sheikh Muhammad bin Zayed Al Nahyan does the same. The Israel-UAE deal opened the door for other countries to follow in the UAE’s footsteps. Will Bahrain, Oman, or Morocco be next?

(Dr. Edy Cohen (Ph.D. Bar-Ilan University) is fluent in Arabic and specializes in inter-Arab relations, the Arab-Israeli conflict, terrorism, Jewish communities in the Arab world.        Dr. Frank Musmar is a financial and performance management specialist and a non-resident research associate at the BESA Center) 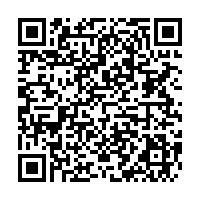