Palestinian Prime Minister Mohammad Shtayyeh has announced that the Palestinian Authority no longer accepts the division of the West Bank into three areas as stipulated by the Oslo Accords and that the entire territory belongs to the Palestinian state.


The PA intends to take over West Bank lands unilaterally.  Israel must warn it that this is a grave violation of the Oslo Accords and will prompt harsh reactions.

Twenty days have passed since Palestinian Authority Chairman Mahmoud Abbas announced the Palestinian leadership’s decision to halt all agreements with Israel. Abbas has set up a committee under Saeb Erekat, secretary of the PLO Executive Committee, that will present recommendations on establishing the mechanisms for this move.

So far the committee has held only one meeting headed by Abbas. It announced that the contents of its discussions were under wraps and would remain that way.

Meanwhile, the security coordination with Israel, which is an important part of the Oslo Accords, continues on the ground. Nor have there been any changes so far in the economic agreement (the Paris Protocol) between Israel and the PA.

Nevertheless, in a meeting on August 4, 2019, with the owners of the homes that Israel demolished in Wadi Hummus in the Sur Baher neighborhood of southern Jerusalem, Palestinian Prime Minister Mohammad Shtayyeh made grave declarations.

“Israel is not honoring any agreement that was signed with it and is treating all the occupied Palestinian territories as Area C. Therefore, we will treat all the territories that belong to the state of Palestine as Area A, including occupied East Jerusalem.”

Since assuming his post a few months ago, Shtayyeh, under orders from the PA chairman, has been leading an extreme line against Israel and a process of disengagement from it.

The accords also make clear that the PA has no authority in east Jerusalem and any governmental activity it conducts there is a blatant breach of the accords.

So far Israel’s political-security echelon has not reacted to Shtayyeh’s words.

Following the Israeli security cabinet’s decision to approve the building of 700 housing units for Palestinians in Area C, the PA announced on August 3 that it intended to approve building plans in Area C – which the Oslo Accords say are under Israel’s full security and civilian control.

Palestinian Minister of Local Government Majdi Saleh said that “master plans have begun in all the areas without connection to the Israeli classifications [of the territory].”

Saleh said the PA would issue building permits throughout the West Bank in line with the rate of population growth and would not build according to Israel’s division of the territory. He remarked that the European Union has agreed to carry out development projects in the West Bank, but Israel is preventing it from doing so.

It appears that, in light of Washington’s intention to publish President Trump’s “Deal of the Century” within a short time, the PA has begun a process of disengagement from Israel and the agreements with it. This means that any attempt to build homes in Areas B and C in breach of the Oslo Accords could lead to clashes between the IDF and Palestinian civilians engaged in the building, and possibly also between the IDF and the Palestinian security forces.

With these decisions, the PA is trying to unilaterally take over parts of the West Bank and establish facts on the ground – not through negotiations and in blatant violation of the Oslo Accords.

Abbas’ new policy of economic disengagement from Israel and boosting of economic ties with Arab states is intended to pressure Israel and to signal to it and the United States that the PA, despite their opposition, is on the way to establishing an independent state.

Last month Prime Minister Shtayyeh visited Jordan and Iraq and signed a series of economic agreements in the fields of trade, health, energy, and natural resources. The PA has also stopped sending patients to Israeli hospitals for treatment; it aims to stop adding to these hospitals’ revenues.

Shtayyeh is also planning to visit Egypt shortly and sign economic agreements there.

The PA seems to be starting a gradual process of disengagement from Israel without, for now, detracting from the security coordination, and is trying to build economic cooperation with Arab states in place of Israel.

In addition, the crisis of the tax revenues that Israel collects for the PA each month still has not been resolved. The PA is trying to force Israel to stop deducting the money that the PA transfers to the families of terrorists and shahids.

Israel must not fall asleep at the wheel; it needs, already at this stage, to warn the PA publicly that unilaterally ignoring the division of the West Bank into three areas as stipulated by the Oslo Accords is a grave infringement and will lead to harsh Israeli reactions in the field as well as sanctions on the PA and its senior figures. The PA must not be allowed to establish facts on the ground that will affect the final status of the West Bank. 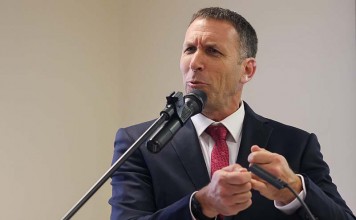