There comes a time when you have to speak the truth. And the truth is singular. There isn’t one truth for me and my people, and another for the Arabs. There isn’t #MyJudaism or #MyIsrael, but only one Judaism, one Israel, one God.

It is only by embracing the truth and spreading it far and wide, no matter who it offends, no matter how many detractors it has, that peace will have a safe space to flower.


Peace will not flower among the lies. It is the lies that will proliferate like weeds, to choke out the truth, and take away its airspace. Lies must be rooted out and destroyed.

It’s the only chance we have.

That Dafna Meir’s murderer wants the land she lived on is unquestionable. And yet, it is beside the point. What her murderer wants is to eradicate the presence of Jews in the world.

Dafna, May Hashem avenge her blood, was a symbol of a truth that came hard to her murderer, that Jews existed before Mohammed was a gleam in his mother’s eyes, and will continue to exist forever.

We will NOT be eradicated.

There will always be people who know that strength is found in numbers and that we must be on our own side. That no one else will be on our side except for us. It will always be true that if you excuse murderers, you will have removed the thin veneer that lies between good and evil, and crossed over to the other side.

There is no people who is occupied except for the Jews who are occupied by a brutal and murderous people whom the world supports. In doing so, the world is supporting the side of evil, as surely and plainly as the nose on your face.

There are no two truths, two narratives. No hashtagged thing that is my-centric. There is one single truth, and one single side for good.

And that is a good thing, a wonderful thing. For truth is a powerful thing, as long as you give it air and space to breathe. Give it room to flower by pulling out the lies by their roots, leaving not even a thin tendril of untruth behind.

Today, at the funeral of his wife, Natan Meir said, “Dafna had a large crown: the crown of truth,” Natan said. “She was very honest, as accurate as a razor. Not everyone liked that but everyone was able to appreciate it, and this truth has now been thrown to the ground, it has burst into smithereens.

“I request that everyone who came out here, pick up something from the light that was spilled on the ground, so that truth may spring from the earth.”

For Dafna’s sake, let us speak loud and clear. Let us preach the truth no matter how vigorously they oppose us, revile us, laugh at us, troll us.

Israel is ours and they may not have it. It is not theirs. Full stop.

Because there is only one truth, one God, one Judaism. And the God of the Jews gave the land to Children of Israel.

And not to anyone else. 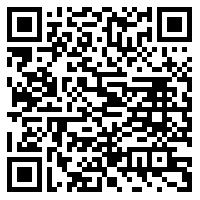