The withdrawal of American troops ordered by President Donald Trump from Kurdish-held territories in northeastern Syria was no surprise to the Kurds. The Kurds had been expecting this move since mid-summer 2019 and were preparing their options in case of such a prospect. The only surprise came from the timing of Trump’s announcement.


According to sources close to the Syrian opposition, the Syrian-Kurds prepared themselves based on their conviction that Turkey’s goal was to take over the Kurdish-held territories along its southern border under the pretext of combating and eradicating terrorism. Turkey further sought to declare the Syrian city of Aleppo as the capital and headquarters of the Free Syrian Army, a Turkish proxy armed, financed, and trained by Turkey.3

Moreover, the Kurds were deeply concerned by Turkish President Recep Tayyip Erdoğan’s declarations that he intended to resettle the three million Syrian refugees currently dwelling in Turkey in the territories “liberated” by the Turkish army. His vow could mean only one thing to the Kurds: a deliberate policy of ethnic cleansing.

The entire Kurdish population in Syria is estimated at 27–3.5 million located mainly in the big cities, with a minority residing in towns and villages bordering Turkey, such as Afrin, Kobani, and Manbij. An influx of almost three million refugees (Arab Sunnis) with no connection at all to the Kurdish ethnicity would mean the disappearance of the Kurdish majority in the areas bordering Turkey (which definitely is a high Turkish interest). The zone would disconnect the Syrian Kurds from their Kurdish “brothers” in Turkey and transform the border belt into a Turkish security buffer, including a “no-fly zone,” heralded by the Turks.

The writing was on the wall: considering the complexity of U.S.-Turkish relations, U.S. interests in its NATO ally, U.S. bases in Turkey, American indifference to the collapse of the Kurdish autonomy in Iraq in 2017, and multiple American declarations about a possible withdrawal from the area “after defeating ISIS,” the Kurds could have easily concluded that the Americans might consider them as an unneeded ally. One day, the United States could abandon them to open confrontations with the Turks, the remnants of the Islamic State, and the recovered Syrian regime.

Therefore, to ensure Kurdish survival as a nation and as a political power in the reconstruction of the future Syrian state after the civil war, the only logical alternative open to the Kurds was to reach an agreement with the Bashar Assad regime. The deal was needed to preserve the special status of the Kurdish territories, which represent almost 30 percent of Syria, since the region was abandoned by the retreating Syrian regime forces in 2012.  In the aftermath, the territories were declared to be under self-rule and operated as an independent federal state.

The February 2019 Turkish military operation nicknamed “Olive Branch,” supported by units of the Syrian Free Army, targeted the town of Afrin, a Kurdish-populated town in the northwestern part of Syria bordering Turkey. According to Kurdish sources, the operation had American and Russian acquiescence. The action convinced the Kurds and the Syrian regime that it was time to mend fences and counter the Turkish threat. In fact, during the operation, the Kurdish units positioned in the eastern parts of Aleppo handed over their positions to the forces of the Syrian regime for the first time since the beginning of the conflict.4

Although contact had been initiated in the past between representatives of the Kurds and the Syrian regime and meetings had been taking place in Qamishli and Damascus, these meetings never resulted in a solution between the parties. The situation changed in mid-2019. The Kurds initiated contact with the Assad regime, and five months later, the first publicized meeting took place in Damascus on July 26, 2019, between a Kurdish delegation composed of the political wing of the Syrian Democratic Forces.  The meeting ended with a joint statement calling for the establishment of a joint committee “to elaborate the negotiations and the exchange of ideas and draw a road map that would ultimately lead to a democratic, decentralized Syria.”

For the Syrian regime, the stakes were very high since there was a real opportunity to recover territory without fighting the Kurds, who controlled almost 30 percent of the Syrian territory. With the knowledge that the United States, Russia, and Turkey were following the situation very carefully, the two sides convened to discuss the future of the autonomous areas held by the Kurds. Ideas were put on the table, to find a common ground between the Kurdish demands and the Syrian regime who had just recovered control of its southern areas that were lost at the beginning of the civil war to the rebels (the Yarmuk Basin, Quneitra, and the Suweyda districts).5

The task of finding a compromise had already been presented by the Kurds at the Third Conference of the Syrian Democratic Council in July 2018. The Kurds adopted a formula for a “Decentralized Democratic Syria” instead of a federal solution, a solution that a-priori was better received by Damascus. The Kurds predicted a positive outcome regarding negotiations on the future of the Kurdish areas bordering Turkey. According to Riad Darar, the co-chair of the Syrian Democratic Council, the United States was well aware of the negotiations with Damascus, but they did not interfere with the decision of the Council. The Russians, meanwhile, served on several occasions as hosts of the meetings, especially on their military base of Hmeimim.6

The fact that the Syrian regime troops, accompanied by Russian tanks, entered the Kurdish areas less than three days after the beginning of the Turkish offensive means that the Russians and Syrians prepared themselves logistically for such an event. They were ready in a matter of hours to deploy and counter the Turkish incursions, which means that the Kurds and Syrians under the auspices of Russia had finally, far from the limelight of the media, reached an agreement on a solution to the Kurdish question in Syria.

The Kurds definitely were not surprised by the American decision.

It is noteworthy that without Trump’s decision and the Turkish offensive, the Syrian regime would have spent considerable time and effort to recover the totality of its territory. Now it was delivered on a silver platter to Bashar Assad by the two foes who would have liked Assad to disappear from the public and political scene. In fact, Trump’s decision to abandon the Kurds has reshaped the Middle East, politically and geographically, with profound negative implications for America’s allies in the region. 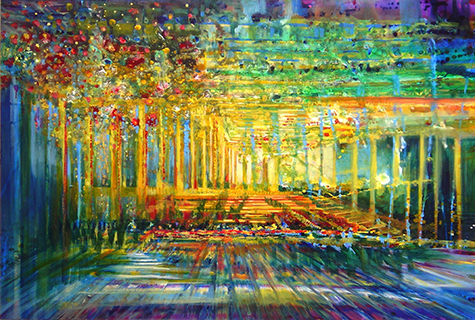