As Israelis take their first tentative and raucous steps into a post-Netanyahu era, the most frequently asked question is how long a jury-rigged governing coalition led by Naftali Bennett and Yair Lapid can survive with no discernable unifying ideology beyond an antipathy toward their controversial predecessor. While no one can predict such an uncertain future, the best person to answer that question might be Joe Biden, who is attempting to navigate a similar path.

If we think back to the strategy that Biden employed last spring to secure the Democratic presidential nomination, the parallels between the partnership that Biden assembled with various factions within his political party and the alliance that Lapid and Bennett cobbled together with a half dozen equally incompatible smaller parties become more noticeable.


The obvious structural differences between Israel’s parliamentary democracy and the presidential system used in the United States create two very different logistical challenges. Biden has been forced to build bridges within the Democratic Party, and the Bennett-Lapid team (I wonder how long Lapid will still be referenced in these discussions now that Bennett has taken office) has relied on a multi-party outreach strategy. But the philosophical difference between conservative parties such as Yisrael Beiteinu and Yamina and left-leaning parties like Labor and Meretz are similar to the distance between Alexandria Ocasio-Cortez and Joe Manchin. The governing configuration might be different, but the concept is the same.

So Biden’s successes—and his unmet challenges—when it comes to convincing unlikely ideological bedfellows to set aside their differences in the interest of a common good might be a helpful roadmap for Israel’s new governing coalition to emulate as they prepare to move forward.

In his campaign, Biden’s first step was to convince the progressives in his own party that defeating Trump should be more important to them than maintaining their ideological purity. After using that argument successfully to persuade supporters of Bernie Sanders and Elizabeth Warren to join him in the primary, he regularly employed that same message to motivate young, progressive and minority voters to turn out for him in the general election. Lapid and Bennett used similar techniques during their own campaigns and the post-election bargaining period.

But as Biden can tell them, assembling that coalition may not be easy, but maintaining it in order to govern is an even greater challenge. Biden’s first weeks in office were shaped by unpleasant memories of the January 6 violence at the U.S. Capitol and of Trump’s ongoing efforts to overturn the results of the election. Because those memories were so fresh, and because Trump’s mishandling of the coronavirus pandemic was so apparent, Biden was able to accomplish his first policy goal of a COVID-19 relief package with minimal difficulty.

But he has struggled since then to convince the two wings of his party to come together on his next legislative priorities. Trump’s absence from social media has largely kept him out of the public eye, and his focus on retribution against fellow Republicans rather than on national policy debate has lowered his profile even further. The result is that the former president no longer seems like as much of a threat to his opponents, and as a result, they have begun to turn on each other. Strange as it may seem, Biden needs Trump, if only to keep his own troops focused on their common goals.

In contrast, Bennett does not have to worry about Netanyahu going anywhere.

“If we have to be in opposition, we will do this standing tall—until we bring down this dangerous government and return to lead the state,” Netanyahu said to his supporters in closing remarks before Sunday’s vote in the Knesset. “I will lead you in a daily battle against this bad and dangerous left-wing government, and bring it down.”

The new coalition may face a great challenge in maintaining its unity once Netanyahu has left the stage. But it seems like that departure is not going to happen anytime soon.

Regardless of any differences, Biden and Bennett have plenty to learn from one another as they try to keep their ambitious and fragile coalitions together. 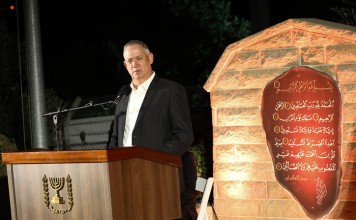