Jewish employees at Stanford University have experienced severe and persistent anti-Jewish harassment, according to a complaint that was filed on Tuesday with the US Equal Employment Opportunity Commission (EEOC) and the California Department of Fair Employment and Housing (DFEH).

The complaint alleges that Stanford University’s Counseling and Psychological Services (CAPS) division has created and fostered a hostile environment for Jews in its Diversity, Equity, and Inclusion (DEI) program, in violation of Title VII of the Civil Rights Act of 1964 and California’s Fair Employment and Housing Act.


According to attorneys from the Louis D. Brandeis Center for Human Rights Under Law, representing two Jewish mental health counselors in the Stanford program, “Our clients strongly support diversity, equity, and inclusion and are mortified that Stanford University has permitted the DEI program to be perverted so that it accomplishes the opposite of its intended aims. The program that is supposed to facilitate the full inclusion of all members of the Stanford community is perpetrating a hostile environment and invidious discrimination that it is meant to eliminate.”

“We have been deluged with messages from students and professors about incidents of anti-Semitism on campuses across the US. It is the worst possible time for Stanford to have decided not to prepare its mental health professionals to deal with this problem,” stated Denise Katz-Prober, Director of Legal Initiatives at the Brandeis Center.

The center noted that Jewish staff were pressured to join the DEI program’s racially segregated “whiteness accountability” affinity group, created for “staff who hold privilege via white identity” and “are white identified, may be newly grappling with or realizing their white identity, or identify as or are perceived as white presenting or ‘passing.’”

The DEI committee allegedly advanced anti-Semitic tropes concerning Jewish power, conspiracy, and control, and endorsed the narrative that Jews support white supremacy. Meanwhile, the same DEI program excluded anti-Semitism from the agenda, and silenced and intimidated Jews who challenged the program’s failure to discuss incidents of Jew-hatred at Stanford.

According to the Brandeis Center, No affinity group was created for persons of Jewish ancestral identity. As a result, there is no “space” in the DEI program for Jewish staff members to safely express their lived Jewish experience. “By endorsing an anti-Semitic narrative that designates Jews collectively as ‘oppressors,’ responsible for systemic racism, while simultaneously denying Jewish ancestral identity, the DEI program fosters anti-Jewish sentiment and encourages hostility toward Jews,” the center alleges.

In May 2020, during a virtual town hall for the Stanford community, unknown participants hijacked the meeting and shared racist messages that displayed images of swastikas and weapons and used the N-word. This incident caused widespread distress among members of Stanford’s student body due to the racist and anti-Semitic nature of the attack. At the next DEI meeting, DEI committee members addressed the racist and anti-Black content but did not mention the anti-Semitic images of swastikas. When asked about that, the answer was that the DEI committee intentionally decided to omit any mention of anti-Semitism so it would not dominate the discussion about anti-Black racism.

In other words, staff had to choose between opposing anti-Semitism or fighting anti-Black racism.

In July 2020, after swastikas were discovered inside Stanford’s Memorial Church, the DEI program ignored the incident in its following meeting.

In January 2021, during a presentation to pre-doctoral students with information about CAPS internship and training opportunities, one of the presenters discussed a program that would explore how Jews are connected to white supremacy, and another presenter recommended a book that portrays the Jewish State of Israel as a racist endeavor.

On another occasion, a DEI committee member accused Jewish staff member Sheila Levin of being racist because she was Jewish. In addition, DEI committee members made repeated offensive and derogatory remarks toward Levin and another Jewish staff member, Dr. Ronald Albucher, invoking classic anti-Semitic tropes and using ethnic and racial stereotypes of Jews as well as insults and put-downs about Jews.

For more than a year, Albucher and Levin repeatedly raised concerns to supervisors and Stanford administrators about the harassment they endured based on their Jewish identity and the endemic anti-Jewish hostility in the CAPS DEI program. However, Stanford refused to recognize the problem or take appropriate corrective action to address it.

Alyza D. Lewin, President of the Brandeis Center noted, “The situation at Stanford is especially concerning because the DEI program trains clinicians who provide mental health counseling to Stanford’s student body. According to CAPS’ leadership, the DEI program is designed to ‘help all staff develop the skills and confidence to engage with students from different backgrounds.’ However, when the DEI program ignores anti-Semitic incidents on the Stanford campus and spreads the anti-Semitic canard that Jews have ‘immense power and privilege,’ it teaches Stanford’s mental health professionals to disregard the mental health consequences of anti-Semitic incidents. This undermines the therapists’ ability to provide appropriate care to Stanford’s Jewish students.” 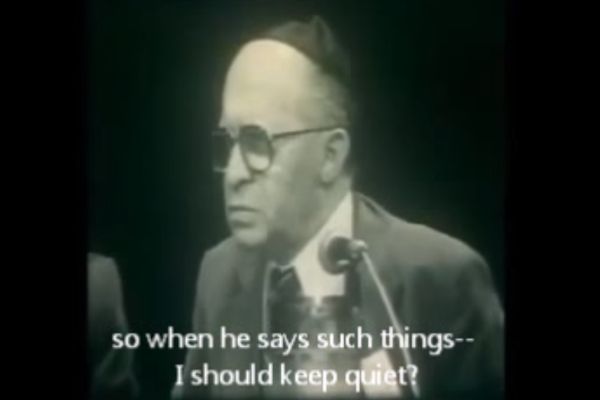 The Inspirational Life of Menachem Begin