According to Israeli activist watchdog groups such as Regavim, during the last five years, illegal Palestinian settlements and infrastructure have sprawled across more than 9,000 dunams in more than 250 Area C locations, supported by more than 600 kilometers of illegally constructed access roads and more than 112,000 meters of retaining walls and terracing. This massive works project is being conducted in broad daylight, often heralded by tall announcement placards and proud press releases.


Israeli government officials contacted did not dispute the Regavim numbers. In exasperation, one military spokesman close to the Area C files estimated “close to 10,000” illegal construction efforts are now underway—adding they feel “powerless to stop them.”

In the 1990s, after years of diplomatic wrangling, Israel and the Palestine Liberation Organization signed the Oslo Accords, envisioning a peaceful two-state solution. Under the complex Oslo Accords, the “West Bank” is divided into three separate administrative zones, Areas A, B and C.

Area C —also called Judea and Samaria—comprises roughly 60 percent of the West Bank. The majority of Area C residents are Israelis—an estimated 325,000 alongside some 300,000 Arabs. Under the Oslo Accords, only the Israeli Civil Administration can authorize new construction in the zone—for Israeli and Arab alike.

But in 2009, Palestinian Authority Prime Minister Fayyad introduced the so-called Fayyad Plan, well-described by a 2011 article in the Palestine-Israel Journal of Politics, Economics and Culture as having “the potential to dramatically transform the Israeli-Palestinian conflict and, by extension, the Middle Eastern political landscape.” The analysis adds, “The essence of the Fayyad plan involves establishing an internationally recognized demilitarized Palestinian state encompassing both the West Bank and Gaza, based on the 1967 borders, with East Jerusalem as its capital. Since August 2009, Fayyad, with the help of the Barack Obama administration and the European Union, has been quietly building national institutions and physical infrastructure … in the West Bank.”

To create a de facto Palestinian State without further negotiation or even diplomatic consultation with the Israelis, European countries, individually and through the EU, have pumped hundreds of millions of euros annually into scores of illegal state-building and related projects—called Area C “interventions.” Just one cluster of the “European Union Area C Development Programme” boasts a €300 million annual commitment, and within three years, is budgeted to reach about €1.5 billion. A single 1650-meter roadnear Jenin in Area C was funded with a €500,000 allocation.

The Area C Palestinian boom advances without any coordination with Israelis about land use, security, environmental impacts, or close proximity to Jewish villages. The PA’s 2014 Roots Project greatly accelerated the entire process. Thus, European governments and the PA have completed the shredding of the already-weakened Oslo agreements.

Most of new Area C settlements are not natural Arab urban growth or urban sprawl. Rather, they are often strategically scattered to effectively carve up Area C, sometimes surround Jewish villages, and sometimes push onto Israeli nature or military reserves.

In many instances, Arab residents from Areas A and B are bused in, encouraged by incentives to relocate or start a second home in the new settlements. Some structures are makeshift festooned with the logo of the European Union. Some are multi-floor office centers. Other times, palatial homes are built. The gamut of construction styles can be seen.

In several cases, the illegal constructions are deliberately established on Israeli military reserves. Since the 1970s, Israel Defense Forces (IDF) have maintained military training and firing ranges, such as Firing Zone 918. That zone now has illegal settlements.

One road, dubbed Smuggler’s Route, courses through the hills from the Palestinian city of Yatta all the way to the Arad Valley in the Negev.

In prior years, Israel’s Civil Administration boasted of its many Palestinian construction permits. A glowing report cites 328 projects authorized during 2011 and 2012. That number has drastically diminished because Area C Palestinians no longer apply for permits; they deny Israel’s right to issue them. Now, they just start building.

While the sudden development rush has been percolating into the Jewish and Israeli media, many Jewish leaders worldwide are completely unaware of this phenomenon. Many are incredulous that the Israeli government has not acted to block the illegal projects. But a security spokesman close to the Area C files located in Bet El blames the inaction on Israel’s complex legal system.

“When we discover something,” stated a security spokesman, “we give them a stop order, and if they don’t stop, they are summoned to an [adjudication] panel. But they don’t come. They go to court to enjoin us.”

These court cases are frequently financed and represented by well-funded NGOs, such as the Association for Civil Rights in Israel. The Gordian knot of legal principles to parse includes Ottoman land law from a long-dismantled empire, Jordanian law from the withdrawn 1948 illegal occupation, post-Six Day War military administrative law, and a library of international legal codes–all stoked and poked with competing maps, surveys, expert opinions, decrees, chronologies, and historical accounts.

“It can take years to decide, and without a court ruling, we cannot get close,” lamented the spokesman, adding, “Meanwhile, they are still building. We can’t do anything about it.” The spokesman continued, “Court can take half a year — or four years. There is no specific time. Each case is different. We have some cases that were opened 15 years ago.”

Once the court rules, if Israel takes enforcement action with bulldozers, the international headlines, EU accusations of war crimes, threats of sanctions, close-up photos of weeping people and global uproar makes being legally right a very unappealing political idea. The EU, the NGOs, and the illegal settlers know this process.

What makes the Palestinian settlements “illegal” is the thin wisp of Oslo that remains. The Accords have now been fractured so many times that what remains is only the preserved corpse of a long-deceased vision.

At the end of July 2019, when the Israeli cabinet voted to authorize an extra 715 permits, the Palestinian response was immediate. PA Prime Minister Mohammad Shtayyeh declared: “We don’t need permission from the occupying power to build our homes on our lands,” adding, the Oslo classification of land into A, B and C “no longer exists.”

Before year’s end, the PA is expected to issue thousands of new permits further circumventing Oslo. As Palestinian expansion roils across Area C, the prospect looms of Gaza fence-style encounters coming soon to a hill in Judea and Samaria.

As Area C dynamics become clearer, still murky is the source and route of the diverse European funding that enables this confrontation. What’s more, there is widespread fear that millions in funds are continuously funneled through entities openly accused of being affiliated with established terrorist organizations. 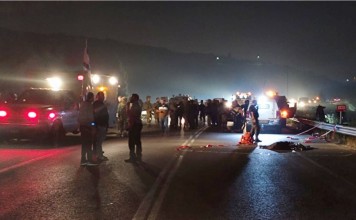