Question: Is it true that one can fulfill the mitzvah of reciting Keri’at Shema merely by saying its first verse?

Rabbi Baruch HaLevi Epstein (Torah Temima, Deuteronomy 6:4, note 5) suggests that Rabbi Yehuda only said this first verse alone when the time to recite the Shema was at hand and he was in the middle of teaching his students and didn’t want to interrupt their Torah study session.

But the fact that he did so proves that one may, in certain circumstances, observe the biblical mitzvah of Shema by merely reciting one verse.

It’s important to note the relative importance of Shema to our people. It represents our acceptance of the yoke of Heaven. It is also our unique singular expression of sanctifying G-d’s holy name. Countless holy Jewish souls throughout the ages of barbaric oppression that have befallen our people have gone to their deaths with the words of Shema on their lips.

The first verse, “Shema Yisrael Hashem Elokeinu Hashem echad,” is also said when we take the Torah from the ark on Shabbat and holidays and in the Kedushah of Musaf on Shabbat and holidays. Concerning the latter instance, the Beit Yosef (Orach Chayim 423 in the name of Teshuvat HaGeonim) writes that in the days of Rav, Yuzgader, a Persian king, issued an edict forbidding the recital of Shema. What did the sages do in response? They hid it in davening so no one would notice it being said but so that tinokot (young students) not forget about the recitation of Shema.

They also prayed for the abolishment of the harsh edict and, indeed, it was ultimately nullified. To ensure that everyone would remember the great miracle that occurred, however, at that time, they enacted that the first verse continue to be said where it was hidden. Thus, we see that the first verse of Shema can stand alone as a tefillah, and perhaps a person can fulfill his Shema by saying this first alone, like Rabbi Yehudah HaNasi did.

The Sages, however, posit that the Biblical mitzvah entails reciting the entire first paragraph or even all three paragraphs. How then are we to understand the view of Rabbi Yehudah HaNasi?

Indeed, in most circumstances when there’s a requirement to recite something, reciting only part of it doesn’t help. For example, a kohen who doesn’t recite all three verses of Birkat Kohanim hasn’t fulfilled this mitzvah. Should he recite only one verse, he has not fulfilled even one third of the mitzvah. Unless he recites all three verses, his recital is meaningless. It’s all or nothing.

Another example is someone who says only half of Shemoneh Esreh. He doesn’t even receive credit for saying that half. He is considered to have said nothing. So why is the mitzvah of Shema different. How can one fulfill the mitzvah just by reciting the first verse according to Rabbi Yehuda HaNasi?

I remember a conversation on this question I had a number of years ago with my late chaver and fellow Halacha columnist here at The Jewish Press, HaRav Yaakov Simcha Cohen, zt”l. He made reference to a shiur of HaGaon HaRav Soloveitchik, zt”l, many decades ago, which contains a solution to this question.

The Mishnah (Berachot 13a) notes in the name of Rav Yehoshua ben Karcha that the first portion of Shema precedes the second so that “one should first accept the yoke of Heaven’s sovereignty (ol malchut shamayim) and afterward accept the yoke of the mitzvot.

The Rambam (Hilchot Keri’at Shema, 1:2) contends that the mitzvah of Shema entails reciting all three of its portions. The first portion precedes the others because it contains the unity of G-d as well as the mitzvah of Torah. The second portion contains the command to perform mitzvot, and the third concerns tzitzit, which relates to all the mitzvot.

Based upon the above, Rabbi Soloveitchik said the following: Although normally cutting a prayer short invalidates the entire recitation, in the case of Shema, it doesn’t. The purpose of the mitzvah is not saying words. It’s kabbalat ol malchut sha’mayim or kabbalat ol mitzvot.” Saying the words of Shema is merely the format by which these sacred commitments are made.

Accordingly, it’s understandable that one may fulfill the mitzvah by reciting only one the first verse as with this verse one accepts the yoke of heaven pertaining to the unity of G-d. 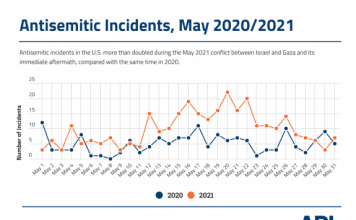 US Jews Know Anti-Semitism When We See It