Question: What preparations must one do to have a kosher Pesach amidst this Covid-19 pandemic?

Answer: It is with a heavy heart that we address this question. We are living in what is, for most of us, one of the most difficult times of our lives. Yet, let me remind readers of the plight of our brethren who perished in the smoke-filled chambers of the Holocaust or who miraculously survived them. Let me remind readers also of those who died in or survived the Soviet gulags.

In the Haggadah, we praise Hashem for delivering us from slavery to freedom. This Pesach, we will be barred from publicly assembling unless a miracle cure is found. Many will be forced to conduct a Pesach Seder for the first time in their lives.

One must expend a certain degree of effort in readying the house for Passover, but one need not fall into a never-ending spring-cleaning quicksand – especially this year. Remember, dust is not chametz.

The Rema (Orach Chayim, ad loc.) adds that before the final search, every person must clean all his rooms thoroughly and also check the pockets and sleeves of garments in which he occasionally puts chametz. (Check trouser cuffs too.)

Based on the Mechaber’s comment about cleaning on the 13th of Nissan, it would seem that one night’s cleaning is sufficient. Perhaps, however, people had fewer physical possessions in earlier time, so insuring that one’s home was chametz-free did not take as long.

The current practice is to thoroughly clean one’s home prior to Pesach, particularly if there are young children around. Ironically, we tend to clean so thoroughly that there is no chametz to search for on the night of the 14th. Hence the age-old custom of putting pieces of chametz in various places that night (Rema, Orach Chayim 432:2). That way, the berachah on bedikat chametz won’t be in vain.

The Mishnah Berurah (ad loc.) cites opinions that are critical of this practice, as some might look for these pieces in lieu of doing a cleaning and searching thoroughly. However, he notes that the Havvot Ya’ir states that we should not void a minhag Yisrael, and the Mishnah Berurah agrees that saying a berachah on the night of the 14th would be problematic if the house is already completely clean and one didn’t hide pieces of chametz.

He cites the Arizal, who says one should place 10 pieces of chametz around the house, taking care to note their location so that one doesn’t accidentally leave chametz in one’s home on Pesach.

Preparing the kitchen properly is most crucial if one is to have a truly kosher home for Pesach. All cabinets (and the refrigerator) should be thoroughly cleaned and lined with shelving material – paper or plastic. Countertops (formica) and sinks (porcelain) should be thoroughly washed down and covered. Granite countertops and stainless steel sinks, however, can be cleansed via purging (see below).

Many gas or electric ranges and ovens are quite easy to kasher; clean them thoroughly and then simply start a self-clean cycle. Ovens and ranges without self-clean cycles should be thoroughly scrubbed and then heated at the highest temperature for an hour. Only someone properly trained in the use of blow torches should considering using them.

Chametz sold to a gentile must be removed from cabinets that will be used on Pesach and stored in sealed cabinets. Only chametz is sold to the gentile – not the actual utensils – so they should be thoroughly cleaned.

Numerous English publications are available at Jewish bookstores on kashering utensils for Pesach (e.g., the OU Guide to Passover and Kovetz Hilchot Pesach – The Laws of Pesach: A Digest). Of course, your greatest resource is your rabbi, who I am sure will be willing to help you.

“(1) You can purchase disposable dishes and paper plates, which can solve many of your problems. The cost is nominal.

“(2) You can purge your utensils, which basically means…to cleanse them for Passover use by means of hagalah – scalding hot water….

“Earthen vessels and chinaware cannot be purged and may not be used. Wooden [implements, for cold usage only], metal and stone utensils may be used after having been purged by means of hagalah, but if it is an article that will be damaged by hot water, such as a vessel glued together, even if only the handle is glued on, purging is of no avail.

“Before the vessel is purged, it should be thoroughly cleansed of rust and the like, and made perfectly clean, but stains do not matter. If the vessel is dented, it should be carefully scraped. If it is made of metal, hot coals should be placed upon the dents until they glow, and the vessel should be purged thereafter. If, however, it is impossible to thoroughly cleanse the dents and cracks, or to ‘glow’ them, it cannot be made valid for use. Hence it is necessary to carefully observe whether purging will avail for knives with handles. It is best, if one can afford it, to buy new knives for Passover.

“Utensils into which water is not generally placed when used over the fire (such as frying pans and the like) require libun gamur – heavier glowing. One should glow them to the extent of making them emit sparks. A wooden spoon, obviously, cannot be made valid for use.

“Purging is done only in boiling water and nothing should be mixed therewith, not even ashes and the like. If one has purged many vessels in one boiler, so that the water becomes turbid, no more purging should be done therein.

“One should not purge a vessel unless 24 hours have passed since leaven was cooked therein. Likewise, the boiler in which the purging is done should not have been used for leaven that same day. Also, carefully observe each time you put a vessel in the boiler that the water comes up boiling hot. If it is necessary to purge the boiler, then it must be full when the water is boiling therein and hot stones should be thrown therein in order that the boiling water should overflow its edge. Purging should only be done until noon on Passover eve.

Drinking and measuring vessels also need to be purged. Glass vessels don’t need to be purged according to the Mechaber (Orach Chayim 451:26), even if they were used for hot liquids, because they do not absorb; mere rinsing suffices. The Rema notes that some people are stricter and opine that even purging doesn’t suffice. The Ashkenazic custom reflects these opinions.

Many communities kasher vessels for those who find it difficult to do so themselves, but this year they might not due to social distancing restrictions.

May I take this opportunity to extend you and yours good wishes for a joyous and kosher Pesach. All of us will be sitting secluded in our homes in much the same way our ancestors sat when they were redeemed. May this Pesach bring us the final and ultimate redemption. 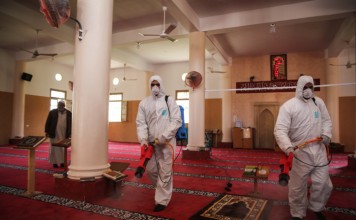