It was the night of Motzei Shabbos before Rosh Hashana, and my husband and I were invited to a pidyon haben in Lawrence at 8:45. Shabbos ended at 8:02, and while most people were puttering in their kitchens getting ready for Rosh Hashana, we made havdala and rushed out so we could be as punctual as possible. We were raised on the philosophy that you can’t miss a pidyon haben, as the mitzva is equivalent to fasting 40 fasts.

Living on Staten Island made it a little difficult to get there on time. Lo and behold, we got there at 9:15, and the pidyon haben didn’t start until after 10. Baruch Hashem, all went smoothly and we had an enjoyable time.


Now fast forward to Rosh Hashana, just three days later. Little did I know that I would be rushing out again right after havdala on Motzei Rosh Hashana, but for a very different reason.

I had come to shul on the second day of Yom Tov and stopped to check myself in the mirror after coming in from the rain. I then approached the door to the shul a few steps away. I swiftly found myself slip-sliding on the wet tile floor. My head made contact with the stone floor. I really didn’t think much of it, as unfortunately, I have a bit of a balance issue and occasionally fall.

Some little boys inquired, “Can I help you?” Very nice of them, but I knew that if I was to get up without falling, a seven- or eight-year-old wouldn’t be much help. Lo and behold, by Hashgacha Pratis, at that moment my husband “happened” to leave the shul to get something he had left in the hallway. I could not have been happier to see him.

At that point, we noticed that there was blood on the floor, and realized it was more than one of my usual little falls. After my husband picked me up, I rushed to the mirror again and saw blood flowing from the side of my eye down my face to my neck and onto my dress. A sight to be seen. A Hatzolah member immediately came out of shul and wanted me to put a cold compress on the area to stop the bleeding. I said no, I must get this blood off my face and neck first. After all, I had drawn a little bit of a crowd, and wanted to look my best under the circumstances. I sat down on chair in the hallway, holding a cold compress on the side of my head.

I was getting different opinions as to whether I needed to go to the hospital right away or could wait until after Yom Tov. The Hatzolah volunteer called his wife, a dermatologist, over to evaluate me. She examined the wound, put on a butterfly stitch, and wiped the blood out of my shaitel—a priority to me. She assured me I could go in and daven and wait for that evening to get stitches. I was quite thankful—that way I wouldn’t have to interrupt my family’s Yom Tov. I went about the rest of the day as usual, but was dreading the after-Yom Tov scene.

That night, my husband made havdala right away and off we rushed to the hospital. Obviously, we were hurrying out for a very different reason than the last time.

Baruch Hashem, my injury wasn’t severe. I needed a few stitches, but was grateful that I had been able to hear all the shofar-blowing and daven all the tefillos on Rosh Hashana, and then to have lunch with my children and grandchildren.

I’m trying to find a connection between the two events. At a pidyon haben, we give the infant to Hashem symbolically as prescribed by the Torah. And on Rosh Hashana, we give of ourselves to Hashem by davening, asking for mechila, and listening to the shofar. We beseech Hashem with our tefillos and teshuva to give our families another sweet, healthy year.

May we all merit this blessing. 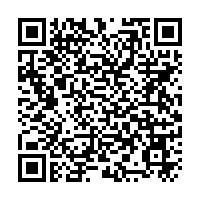