Upon hearing of Abraham Lincoln’s assassination, the poet Walt Whitman wrote a heart-wrenching poem about a ship that finally made it to port due to the courageous leadership of its captain, only to have the celebration marred because of the captain’s death. The first stanza powerfully captures these sentiments.

O Captain! my Captain! our fearful trip is done,
The ship has weather’d every rack, the prize we sought is won,
The port is near, the bells I hear, the people all exulting,
While follow eyes the steady keel, the vessel grim and daring;
But O heart! heart! heart!
O the bleeding drops of red,
Where on the deck my Captain lies,
Fallen cold and dead.

Whitman, who respected Lincoln tremendously, was terribly shaken by his death. For him, the ship of state was in stormy waters for over four years during the Civil War, and it was Lincoln, the indefatigable captain, who weathered all the storms and ultimately steered the ship safely to port, only to be assassinated as the ship was docking.

Whitman is not alone in describing leadership in terms of ships and their captains. The Torah world has also relied on this metaphor. For example, in the introduction to the sefer, Dvar Avraham, the Kovnoh Rav’s son writes how his father had the opportunity to escape Europe with the outbreak of the war but refused to do so exclaiming that the captain is the last person to abandon ship, not the first. Years later, Rav Shmuel Rozovsky in his eulogy for Rav Yosef Kahaneman, the Ponovezher Rav, described how Rav Kahaneman was always pained by the fact that he survived the Holocaust while nearly all the other Jews and rabbinic leaders of Lithuania perished at the hands of the Nazis. Referring to the midrash (Devarim Rabbah 11:3) that criticized Noah for successfully saving himself, but not his people, Rav Kahaneman felt that as a captain he saved himself but not his passengers. (Rav Rozovsky explained that Rav Kahaneman used this pain to generate the energy and focus necessary to rebuild Torah Judaism in Israel.)

The power of this metaphor is illustrated eloquently in the Gemara in Bava Batra (91a-91b) that describes the day Avraham died (which occurs at the end of this week’s parsha). Upon hearing of Avraham’s death the world as it were cried out: “Woe unto the world that has lost its leader; woe unto the ship that has lost its captain.” The commentators offer various insights regarding the employment of this metaphor. The Maharsha, for example, suggests that the first part of the sentence refers to Avraham’s teaching the world the ways of its leader – namely, Hashem. The second part refers to Avraham’s teaching the world how to live an ethical and upright life.

I believe we can offer an additional explanation. The word manhig, leader, refers to the act of providing a vision. The word captain refers to the tactical expertise necessary to actualize this vision. Avraham had both qualities. He provided and promulgated a grand vision of providential monotheism to the world, while simultaneously guiding people on how to embody this vision within the challenges of their everyday lives.

Authentic leaders always live up to the best of maritime leadership. They understand their responsibility to their crew and passengers’ well being while providing a vision of their destination and a course to get there. They realize that the most glorious ideal is not to go down with the ship, but to get the ship safely to port. 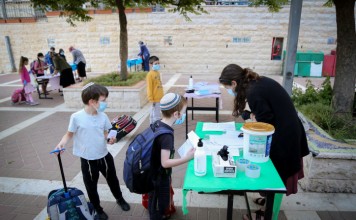