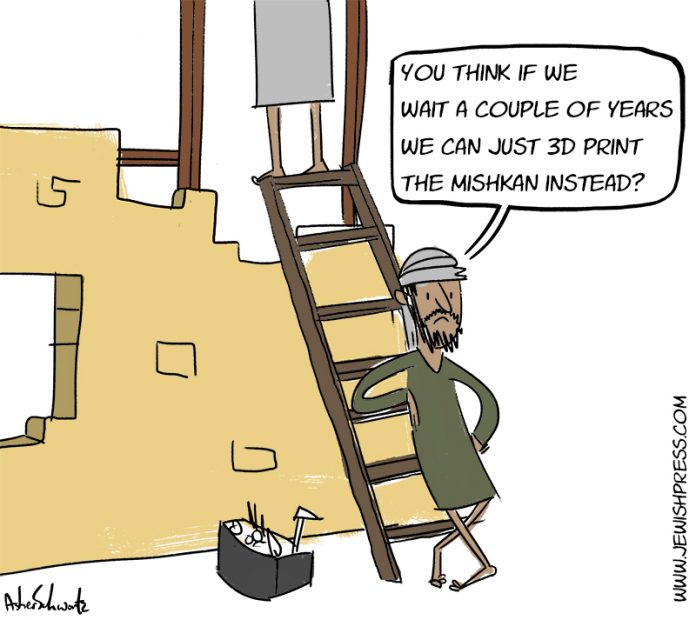 
Parshat Vayaq’hel features the actual building of the Mishkan. In our episodes on T’ruma, Tetzave and Ki Tisa, we saw Moshe receive Divine instructions for building the Tabernacle. But now in Vayaq’hel it would finally take place.

A major function of the Mishkan was to preserve the intense experience of the Sinai revelation for the children of Israel as our journey towards and into the promised land progressed.

Due to his own personal development, high spiritual level and prophetic understanding of what Israel truly is deep down in our collective soul, Moshe tended to see the people as essentially good but simply in need of instructions on how to properly connect to HaShem.

But Aharon, who had spent his life among the Hebrew slaves and involved in their day-to-day needs and challenges, was more directly aware of the human weaknesses that lead to sin. He therefore had more appreciation for the need to assist in cleansing the people from their transgressions through the korbanot and for reorienting their desires through putting on a great show that could capture the people’s imagination and inspire them to live according to the Torah.

In T’ruma and Tetzave, we see the Mishkan described in its ideal form, but sharply separated between the respective orientations of Moshe and Aharon. Aharon’s name is absent from Parshat T’ruma, where the instructions for the Mishkan are described according to Moshe’s ideal understanding of it being a vehicle for Divine revelation. And Moshe’s name is absent from Parshat Tetzave, where the instructions focus on Aharon’s ideal understanding of the Mishkan as a tool for cleansing Israel from transgressions and capturing the public’s imagination.

Parshat Ki Tisa, which primarily focuses on the crisis of the Golden Calf, also begins by adding some details of the Mishkan that aren’t part of either ideal but serve to make it attainable in our imperfect world.

In Parshat Vayaq’hel, we see all these elements come together as the actual construction of the Mishkan finally begins. Although Vayaq’hel and Pekudei, the final parshiot of Sefer Sh’mot, each have their dominant focuses on the respective approaches of Moshe and Aharon, both also intertwine these orientations in describing the actual building of the Mishkan.

While the ideal orientations of Moshe and Aharon could be separated in theory, the crisis of the Golden Calf demonstrated that they must be united in practice. Spiritual cleansing must take place as preparation for Divine connection.

On the eleventh of Tishrei, one day after Moshe’s second return from atop Sinai, the prophet assembled the children of Israel to announce the construction of the Mishkan.

When Moshe informed the people that they should voluntarily contribute the necessary materials for the construction, the response was overwhelmingly generous. The women even took it upon themselves to contribute the copper mirrors they had used to make themselves beautiful in Egypt.

At first, Moshe hesitated to accept these mirrors due to what he saw as their connection to human vanity and sexual passions. But our Sages teach that the Creator told Moshe he was mistaken. These mirrors saved Israel. When the Hebrew men would come home exhausted after suffering an entire day of slave labor, their wives would use the mirrors to look their best and entice their husbands to have relations and impregnate them.

This practice actually kept the people of Israel alive.

The cauldron in the Tabernacle courtyard where the kohanim would wash their hands and feet was therefore made from these copper mirrors, demonstrating that the essence of this cauldron is the purification and proper direction of natural human passions in order to improve the world.

In addition to being instructed to contribute the materials to build the Tabernacle, the people were also invited to participate in its construction under the leadership and guidance of Betzalel ben Uri of the tribe of Yehuda and Oholiav ben Aḥisamakh of the tribe of Dan.

We’ve already explained in previous episodes the different identities of the Hebrew tribes and how Yehuda represents what’s unique about Israel’s identity, worldview and historic mission.

The tribe of Dan should meanwhile be seen as an extreme expression of Yosef, which is more universalist and represents what we share in common with other peoples and cultures.

If we were to try understanding this using contemporary examples, we could say that when any given social or political issue arises, a Jew with a more Yehuda orientation would generally see the issue through the prism of Israel’s history spanning thousands of years. He might even cite Biblical examples of how our people responded to certain challenges in ancient times in order to advocate policy for today.

Yehuda Jews are psychologically living the story of Israel and understanding the world around us through lessons learned from our people’s history, the statutes of our Torah and ancient prophetic ideas about our collective destiny and mission.

Jews with a more Yosef orientation would likely look at the very same social or political issue through the prism of what’s universally considered just and righteous according to the values of what they perceive to be the most morally advanced civilization of the time.

So Yehuda and Yosef generally look at the same issues, come to radically different policy conclusions and tend to relate to the positions of the Other as deeply frightening.

It’s important to keep in mind that although these tribes were once very sharply biologically defined, today we should see them more as different shades of our collective soul or different personally types found within the Jewish people. But the generation that left Egypt experienced these as very distinct tribal identities.

The Mishkan had to be constructed by both these tribal forces because fulfilling Israel’s mission ultimately requires us to find the correct balance between Yehuda and Yosef that could fully express both. But if Yosef represents the opposite force as Yehuda and Dan is the extreme expression of Yosef, why wouldn’t the Mishkan be built under the leadership of a team pairing a tribesman of Yehuda with one of Yosef? Or a tribesman of Dan together with one from Shimon that represents the extreme expression of Yehuda in a similar way as Dan is Yosef’s extreme expression?

I think the answer lies in the fact that the goal must ultimately be to synthesize the forces, which requires at least the dominant partner to recognize the value of the Other. Shimon type Jews often have trouble relating to Dan or even to Yosef as anything other than weak Jews or traitors.

But Yehuda has the potential to actually recognize the truth expressed by Yosef and Dan and to incorporate it into a more inclusive understanding of the Hebrew mission. The people of Israel has a unique identity, a unique country, a unique culture, a unique set of values and a unique worldview. All of these are emphasized and championed by tribal forces like Yehuda, Shimon and Levi.

But Yehuda, as the tribe meant to lead, must be able to also understand and appreciate that Israel’s particularist identity and national story is for the sake of a universalist goal that’s meant to ultimately librate and benefit all of humanity.