Our haftorah tells the story of Elisha and the Isha Hashunamis and the miracle of the tremendous amount of olive oil Hashem blessed her with. The question we can ask is why her miracle involved olive oil.

Let us investigate the significance of olive oil in Torah thought, especially as it relates to lighting candles for Shabbos.


The lady of the house walks towards her candlesticks with great anticipation, knowing that she is about to touch something otherworldly. It is one of the most beautiful experiences of Jewish life. She strikes the match, lights the candles, closes her eyes, and makes the bracha. As she finishes and begins to recite the special “yehi ratzon” prayer, an overwhelming feeling of spirituality permeates her inner core. Shabbos has arrived.

The light of the candles is perhaps the most illustrative image we conjure up when we begin to think of Shabbos. The lights represent the spiritual light with which Shabbos presents us. Interestingly, it is not only the light that is important. Even the type of fuel we use to make the house glow has significance. As we shall see, this significance will connect to Shabbos as the – Mayain Olam Habah, microcosm of Olam Habah.

Most women light with the beautiful standard wax candles, and there is certainly nothing wrong with this practice, in fact, some poskim hold that today wax candles may be parallel to the preferred olive oil. However, there are sources that indicate an enhancement to the mitzvah is accomplished when one lights with oil, and an even greater enhancement is lighting with olive oil.

Let us learn why that is.

Shabbos 2:1-3 lists various fuels used for light during the course of the week; some of these are acceptable for Shabbos lights, while others are not. Rabi Tarfon, however, disagrees emphatically stating, “Only olive oil can be used for lighting [the Shabbos lights].” While we do not paskin like Rabi Tarfon, the Gemara (Shabbos 23a) does indicate that olive oil is a preferred choice: “Rabi Yehoshua ben Levi says, All oils are valid for [Shabbos] lights but olive oil is the best option [min hamuvchar].”

Why is lighting with olive oil the preferred? The Mishna Brura explains (264:23) that olive oil burns the nicest; we are not afraid that it will not burn brightly or that it will go out. If so, says the Mishna Brura, nowadays our oils or wax candles burn just as well as olive oil (in that they are easily absorbed into the wick), then perhaps they should be considered just as preferable. As a result, there would not be any special reason to light with olive oil. Rav Simcha Bunim Cohen (Radiance of Shabbos, page 19, note 2) cites Az Nidbaru (Volume 3:4) as concluding that there is no special halachic reason to light specifically with olive oil in our times. However, Rabbi Cohen notes that the Gra did light with olive oil and the Siddur Arizal instructs one to light with oil, seemingly of any type. (Depending on potential danger risk, sensitivity to odors, the extent of clean up after Shabbos, and financial cost, there can be situations and individuals for which wax candles would be the ideal choice. In terms of modern options, many have found paraffin oil to be ideal for lighting, especially since some poskim hold that it is parallel to olive oil in the enhancement of the mitzvah. One should consult with his/her rav concerning this entire matter.]

Even if lighting with olive oil is not as halachically significant as it was in the times of the Gemara, there are sources and concepts in hashkafa which describe the value of using olive oil for Shabbos lights. The Gemara (Sanhedrin 24a) compares talmidei chachamim to olives and olive oil, therefore, says the Machzik Bracha (brought in Yalkut Yosef), lighting with olive oil can create a zechus to have children who are Torah scholars. The Sefer Chasidim (siman 272) says that there was once a man who lived a very long life and the only merit that was found (besides his general observance of the mitzvos) to justify this was the fact that he used olive oil for Shabbos lights.

The Midrash Tanchuma (Beha’aloscha 1) indicates that one of Rabi Tarfon’s reasons for using only olive oil is because it is what we use for the menorah in the Bais HaMikdash. If so, it is obvious that the Ribbono Shel Olam chooses olive oil over any others. (According to this, it would appear that when we light Shabbos candles, we are actually fulfilling some aspect of lighting the menorah in the Bais HaMikdash. Apparently, our homes become a miniature Bais HaMikdash on Shabbos.)

Rav Shmuel Beifus, in his sefer, Shabbos-Mai’ain Olam Habah, suggests another reason why olive oil may be the preferred lights for Shabbos. Chazal say (Menachos 53b) that just like an olive tree does not ever shed its leaves, so too Klal Yisrael will never be destroyed, not in this world or in the next. Since Shabbos is the Mayain Olam Habah, we display this by lighting with olive oil.

In addition, we might suggest, the Gemara says there that olive oil represents the fact that Klal Yisrael has repented. Just like olive oil is produced through the squeezing and suffering of the olives, so too Klal Yisrael does teshuva through suffering. [This does not necessarily mean physical suffering. Rav Tzadok in Tzidkas Hatzadik (number 57) says clearly that emotional suffering and regret can qualify as the suffering needed for atonement.] Shabbos is the source of all teshuvah. The roo) of the word Shabbos is shin, bais, which means to return and to repent. As Rav Tzadok (Takanas HaShavin, page 145) says, the strength of teshuvah comes from Shabbos. Therefore, olive oil is a preferred fuel for Shabbos lights to indicate to Hashem that we have performed teshuvah (on some level) in our desire to return to a close relationship with Him, with the onset of Shabbos.

Finally, the Nesivos Shalom (Tetzaveh, page 222) draws a connection to olive oil and Shabbos from the fact that the oil is a hidden aspect of the olive that is revealed through crushing. So too, Shabbos possesses the “ohr haganuz” the hidden spiritual light, that Hashem concealed for the righteous. This is why Shabbos is described as being held in HaKadosh Boruch Hu’s concealed treasure house, bais ginzi, by Chazal (Shabbos 10b), since the ohr haganuz dwells within it. In order to see this concealed light on Shabbos, we, like the crushing of the olives, must squeeze, crush and remove our attachment to material things and our physical desires.

Olive oil symbolizes much blessing and spirituality and we now understand why a miracle would be done with it. 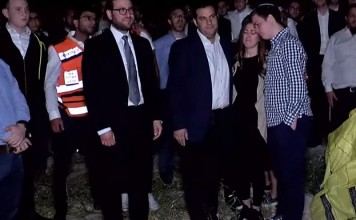