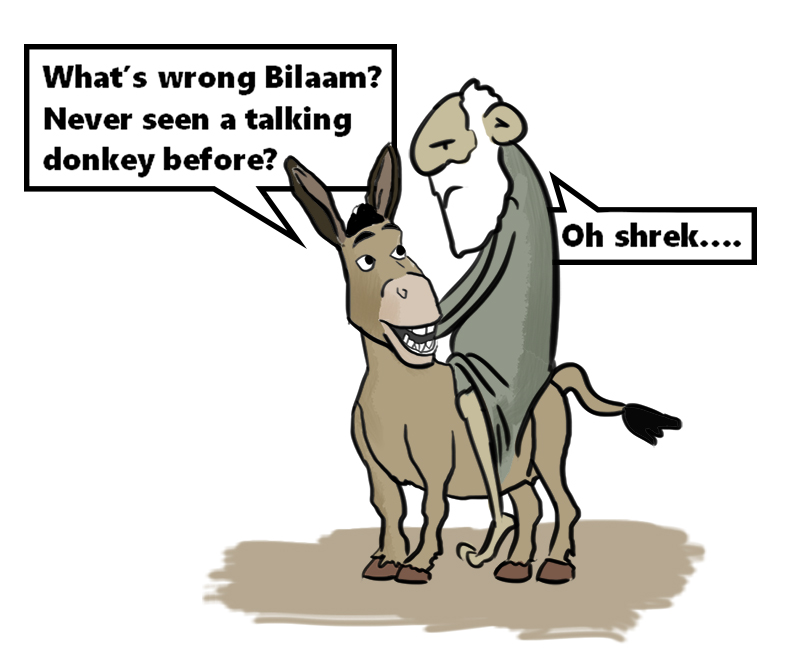 Until the last nine verses of the parsha, the Jewish people do not appear in Balak. We read of Balak’s summons to Bilam, and their failed attempts to have Bilam curse the Jewish people. They interact about the Jewish people, without the Jews being there. I think it’s the only time, certainly post-Bereshit, where the narrative turns away from the Jews themselves.

Perhaps those last nine verses give us a first answer. Rashi to 25;1 says Bilam had had the idea of Moabite women seducing Jewish men. When he failed to curse the Jews, he offered this as another way to defeat them. Rashi sends us to Sanhedrin 106a, which gives a more elaborate version of the backstory.

Sanhedrin says Bilam knew Hashem is sonei zimah, hates sexual immorality, and the path to victory lay in luring the Jews to such immorality. He further recognized the Jewish people liked linen clothing—such a seemingly innocent vice—and told the Moabites to set up attractive shops, place an old woman on the outside, a younger one inside.

The Gemara does not explain his reasoning; I think they meant the older woman to dull the Jew’s alertness to a possibly sexualized encounter. The Jews came by the shops, had purely professional transactions. A few uneventful sales convinced them there was no danger, leading them to accept an invitation inside the shop, where the younger woman would offer very strong wine, sparking the Jew’s lust. Beholden to his passion, the Jew would agree to commit an act he thought insulted their idol, not realizing it was their accepted form of worship, and then (rachmana litzlan, Gd save us) to deny Hashem.

The fuller version gives a more plausible sequence of events for how a Jew could find himself denying Hashem. However alluring a member of the opposite sex might be, I hope we are not insecure enough in our faith to allow one encounter to lead us that far astray. Nor does the Gemara, is my point. The Gemara thinks the Moabites played the long game, built ordinary relations with the Jews, and from within those drew some of us away from our life’s blood, service of Hashem. It’s harder to stop in the middle, the Gemara implies.

(For those of us who live in welcoming non-Jewish countries, where we have no reason to think the non-Jews have any conscious intent to draw us from Judaism, intermarriage rates remind us how easy it is to fall away. R. Ephraim Buchwald, a founding father of the kiruv movement in the US, used to point out American Jewry since 1945 probably lost as many Jews to intermarriage as were killed in the Holocaust).

We might therefore see the whole beginning of the parsha as background to those nine verses. Perhaps the Torah wanted us to understand how we came to suffer a plague in which 24,000 Jews were killed, which theoretically could have taught us to stay away from intermarriage forever.

The previous page in Sanhedrin offers another answer. (The Gemara there presents an extended reading of the verses regarding Bilam, one of those whom the first Mishnah of the chapter said lost his share in the World to Come). Bilam describes himself as yode’a da’at ‘Elyon, knows the mind of the most-High. Mockingly, the Gemara says “the mind of his own donkey he does not know, he knows the mind of the most-High?” [A line mori ve-rabi R. Lichtenstein zt”l used to invoke frequently, to warn us against glibly asserting we know why Hashem acts in various ways].

He did not know Hashem’s Mind, the Gemara says [in contrast to Midrashim such as Sifrei to Ve-Zot Ha-Berachah, which claims Bil’am was a prophet of the level of Moshe], he knew only the moment every day when Hashem’s rage burns, which he could have used to have Hashem destroy the Jewish people. To circumvent the possibility, Hashem refrained from such anger all those days, which Michah 6;5 speaks of as a charity or righteousness of Hashem’s on our behalf.

Leaving aside many stimulating aspects of the passage (such as what it means by saying Hashem has a moment of anger every day), the Gemara shows us Hashem is working to our benefit, in ways we notice and ways we do not. Were we not told the story, we would never have known the mortal danger we dodged.

A truth which applies in all generations, I suggest. We struggle and scramble to take care of ourselves, physically, economically, and politically, as we should and must. Balak tells us not to think it’s the whole picture, there are often, maybe always, other stories going on, some of which we never know, meaning we need to always be grateful for Hashem’s interventions and continuing protection, regardless of whether we see or experience them directly.