This Shabbos is Shabbos HaGadol. Many congregations say the Yotzros of Shabbos HaGadol in the Reader’s repetition of the Shacharis Amida. We do not say Av Harachamim  or Hazkaras Neshamos. It is customary to recite this Shabbos afternoon the Haggada  from “Avadim hayyinu” until “lechapper al avonoseinu.” It is a Minhag Yisrael that the Rav  delivers a special sermon this Shabbos, the Shabbos HaGadol Derasha, combining Halacha  and Aggada as they relate to the laws of Pesach.

On Tuesday evening we search for chametz – all remaining chametz, including that which might be stuck to utensils, should be sold to a gentile via the rabbi. The sale is to take place no later than the latest time at which one may yet own such chametz before Pesach (at the end of the fifth hour of Erev Pesach – we divide the daylight hours into 12 equal units called  sha’ot zemaniyot). This year that time in N.Y.C. is Wednesday 11:52 a.m. E.D.T. We may not eat chametz beyond one sha’ah zemanit before that: this year in NYC it is 10:47a.m. E.D.T. At the later time (when we are forbidden to own any chametz) we burn the chametz which we have gathered in the search the night before and recite Kol Chamia and thus we are  me’vatel – we nullify – our ownership of the chametz.

While we are now forbidden to eat chametz, we are also proscribed from eating  matzah  [on Erev Pesach] until the Seder. It is customary for all firstborn to fast on Erev Pesach in commemoration of their deliverance from the decree of death to the firstborn that afflicted all in Egypt. If one is unable to fast and has attended a Seudas Siyum of a Gemara tractate, then one may eat.

This year, as Yom Tov falls on Thursday and Friday, we are required to make an eruv tavshilin in order to allow us to make our preparations for the Sabbath. This eruv consists of a matzah and a cooked food. It is also customary for those who need an eruv chatzeros (to allow them to carry in communal and joint driveways and courtyards) to make this eruv,  once a year, also on Erev Pesach, putting aside a matzah for this purpose.

When lighting candles Wednesday evening, we bless both Lehadlik ner shel Yom Tov and  Shehecheyanu (N.Y.C. candle lighting time is 7:08 p.m. E.D.T.). We recite the usual festival  tefilla for Maariv with inclusion of Vayedabber Moshe before the Amida and Kaddish Tiskabbel at the conclusion. (Nusach Sefarad include the whole Hallel both evenings – the first night and the second night – as well, with a beracha). Congregations that usually recite Kiddush in the synagogue on Friday nights do not do so these two evenings; instead, all wait to recite  Kiddush at the Seder.

At home on both evenings we recite the Kiddush of Yom Tov and Shehecheyanu on the first cup of wine, and we continue with the Seder ceremony, Mah Nishtana, the dippings, matzah, maror, the Haggada, three additional cups of wine, and the Afikoman.

In Kerias Shema at bedtime, these two evenings only, we say only the blessing of Hamappil  and the first parasha of the Shema. We delete the other related paragraphs as this night is leil shimurim, when we are subject to special Divine protection.

Thursday morning: Shacharis for Festivals with Festival Amida. Some say the Yotzros as found in the Machzor, followed by whole Hallel, and we then remove two Sifrei Torah from the Ark. We recite the 13 Middos, Ribbono shel Olam, Berich Shemeih, etc. In the first Torah  scroll we read Parashas Bo (Shemos 12:21-51) from “Vayikra Moshe, Mish’chu … until … Tziv’osam” and call five Aliyos. In the second scroll we call the Maftir, we read in Parashas Pinchas (Bamidbar 28:16-25), “U’Vachodesh Harishon until Kol meleches avoda lo sa’asu.” We read the Haftara in Yehoshua (5:2-6:1, 6:27), Vayomer Yehoshua. In the blessings of the Haftara we mention the Festival.

Musaf: The chazzan dons a kittel and intones the half Kaddish to the special  Nusach  for  Tal. Some have the gabbai announce Morid HaTal before the silent Shemoneh Esreh and thus Mashiv Haruach Umorid Hagashem is not recited from this day and on. (Others do not announce it before the silent Shemoneh Esreh and thus they stop saying Mashiv Haruach  from the Mincha tefilla and on.) The chazzan recites the prayer for Tal (dew) after which the chazzan continues with Kedusha. After Retzeh, we recite Ve’se’arev and the Kohanim  duchan (as it is not Shabbos, with the Ribbono shel Olam tefilla included). We conclude the service as usual.

Thursday evening: candle lighting is delayed until the first day of Yom Tov has concluded. We then bless Le’hadlik ner shel Yom Tov and Shehecheyanu. Some wait as long as 72 minutes after shekiah to light the candles, while others light as early as an hour after sunset (N.Y.C. 8:28 p.m. E.D.T.), yet others wait only 45 minutes after shekiah to light (N.Y.C. 8:13 p.m. E.D.T.). At that same time we are allowed to begin cooking preparations for the Seuda of  Yom Tov Sheni.

We delay Maariv as well in order to begin [the counting of] Sefiras HaOmer. Otherwise  Maariv is the usual Festival text (Nusach Sefarad add whole Hallel at the conclusion of the Shemoneh Esreh. We count the Sefira, preceded by the blessing Al Sefiras HaOmer). At home we repeat all the Seder procedure of the previous night.

Friday morning: Shacharis of the Festival (Shalosh Regalim) like the preceding day. Some say the Yotzros as found in the Machzor. We remove two Sifrei Torah from the Ark. In the first we read in Parashas Emor (Vayikra 22:26-23:44), from “Shor o kesev” until “Mo’adei Hashem el Bnei Yisrael” and call five Aliyos. We place both Torah scrolls on the Bimah and the Reader recites half Kaddish. We then call the Maftir to read in the second Sefer in  Parashas Pinchas (Bamidbar 28:16-25), from “U’Vachodesh Harishon until Kol meleches avoda lo sa’asu.” We recite the Haftara (II Kings 23:1-9, 21-25) from “Vayishlach Hamelech until Va’yetzav Hamelech” (we delete 12 verses) and conclude with Lo kam kamohu. Chazzan chants Kah Keili, then all recite Ashrei, chazzan says half Kaddish, we then conclude with Musaf of Festivals in which the Kohanim duchan.

Mincha is the usual Festival prayer.

Since we had made our eruv tavshilin prior to Yom Tov, we make all necessary preparations for Shabbos during Yom Tov, prior to Shabbos. For Shabbos candle lighting times, consult next week’s luach in this issue. 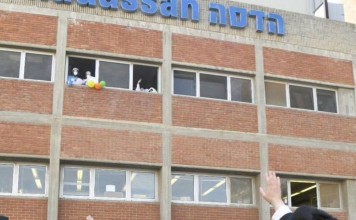