The Israeli Navy received its second SA’AR 6 Patrol Corvette ship on Tuesday (May 4) from the Thyssenkrupp Marine System company in a flag-raising and naming ceremony held at the company’s shipyard in Kiel, Germany for the INS Oz.

Dr. Wirtz, Chairman of the Executive Board of Thyssenkrupp Marine Systems delivered remarks at the ceremony, preceded by “our deepest condolences” to the people of Israel over the Meron tragedy.

“Until now, what you see behind me is just a nameless steel construction. With today’s ceremony, this Corvette will get its name. It will receive its identity, its soul,” Wirtz told those gathered.

Wirtz was followed by Israeli Ambassador to Germany Jeremy Issacharoff who was also present and delivered remarks at the ceremony.

He thanked the company chairman for the kind words that he expressed after “the terrible disaster last week in Har Meron.” Issacharoff added, “We know you are a true friend of Israel.”

Get Out of Your Own Head 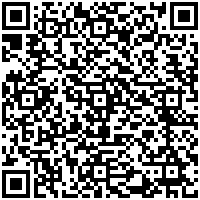