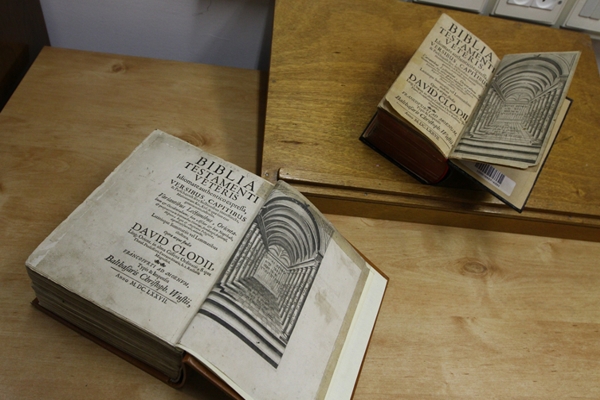 When Shagrir informed the staff of the Younes and Soraya Nazarian Library that he wanted to donate a 350-year-old copy of the Tanakh, the staffers welcomed the idea, pleased that they could add another antique edition of the Book of Books to the library’s collection. But they were quite surprised to discover that the volume, which had been printed in Germany in 1677, was a near-duplicate of a Tanach the library already had.

While the two volumes were very similar, they were not identical. The copy the library owned was narrow with almost no margins, the new copy had wide margins, in which there were numerous notes written in Latin, in tiny handwriting, by no less than 10 different readers in the 17th and 18thcenturies. The editor of the edition and source of the commentary that accompanies the printed text was David Clodil (1644-1684), a theologian and Hebraist – a Renaissance-era scientific discipline in which Christian scholars studied the Hebrew sources of Christianity in depth.

How the volume made its way from a 17th-century Frankfurt printing press to finding its twin in Haifa is a fascinating story. As Shagrir told it, a month after Egyptian President Anwar Sadat came to Israel in November 1977, Shagrir and a group of other Israelis made a secret trip to Egypt. Towards the end of the visit, as he was walking through the streets of Cairo, he found himself in a store that sold antique books. It turned out that the proprietor was not Egyptian, but Armenian, and he was a big fan of a film Shagrir had recently released about the Armenian genocide.

When the shopkeeper discovered that he was speaking to the producer of that film, he gave Shagrir a wrapped copy of a book, but made him promise not to open it until he returned to Israel. When he returned and opened the package, he was stunned to find the ancient volume. So nearly 350 years after it was printed, and 37 years after it arrived in Israel, the volume of the Tanach was reunited with the copy held by the University. Shagrir passed away last month on February 4 at the age of 77.