TEL AVIV – 150 Christian citizens of Israel demonstrated today (Mar. 23) outside the European Union’s delegation in Tel Aviv against the EU’s silence in relation to what they termed “the ethnic cleansing of Christians throughout the Middle East.” The protesters demanded that the EU act on their own cry for human rights and fight for the Christians throughout the Middle East, who are quickly becoming extinct everywhere but Israel.

Father Gabriel Nadaf, a Greek Orthodox priest from Nazareth and strong proponent of Christian enlistment in the IDF, demanded that the attacks on Christians be stopped and thanked Israel for being a warm home for Christians.


Shadi Halul, spokesman of the Christian Lobby (CL) which organized the protest, stated: “We have witnessed in the past how the world was silent as six million Jews were slaughtered. Here in Israel, where we are enabled freedom of worship, protection and a normal life, we have decide to cry out and call on the European Union to safeguard human rights in Israel and throughout the world. Become active, do not repeat past mistakes. We constantly receive reports from our Christian brethren throughout the Middle East imploring that they be helped, envious of our status as Israeli citizens.”

Last week the Christian Lobby sent a letter to the EU Ambassador in Israel and 18 other western Ambassadors protesting their inactions. “We, the members of the Christian Lobby in Israel, found it appropriate to turn to you and cry out about the human and citizens’ rights condition of our Christian brothers across the Middle East. The slaughter, persecution, discrimination, apartheid, the ethnic cleansing, and all the crimes committed against the Indigenous Aramaic & Christians of the Middle East, in Egypt, Syria, Iraq, Gaza, Lebanon and the Palestinian Authority, among others, and continue to be committed without any intervention of the Western countries,” the letter states.

In the Letter the CL demand that the EU take action. “We are turning to you as someone who represents a Western country, which engraved the values of human and citizens’ rights on its flag. Get up and take action. Prove to the slaughtered and the persecuted, and to yourselves, that you believe in those values and act accordingly, wholeheartedly, and not half way.”

They further attack the EU for their double standards regarding Israel. “The lack of taking real steps by the European and Western countries and the continuation of the horrifying condition pales, opposed to the double standards and the hypocrisy of Europe and the West towards the State of Israel, the Jewish and democratic country that provides freedom of religion, human rights and defense to every religious and ethnic minority. There is no doubt that the safest and most free place for Christians, as well as other minorities in the Middle East, is the State of Israel… the lack of steps taken for the Christians in the Arab countries, in the Middle East, bring into question the sincerity of the declarations and intentions of the European and Western countries regarding human rights and humanism. It seems that the treatment towards Israel is a cover up for the failure of the west in the Middle East, failures that allow the continuing of the crimes and atrocities against Christians.”

“From here, from the State of Israel, a state that was established by a nation that was persecuted and slaughtered while the world stood by and watched, we the members of the Israeli Christian lobby are calling out “no more”, we will no longer be silent. No more to the abandonment of Christians in the Middle East. No more to the double standards and hypocrisy. And yes to taking action for the persecuted Christian minority. We are demanding the involvement of your country to stop the ethnic cleansing committed against the Eastern Christian nation in the Arab countries and the Middle East,” the letter concludes.

A recent study warns that Christianity is at the risk of being wiped out in the biblical heartlands of the Middle East. According to the London Daily Telegraph, which cites the study, 10% of Christians worldwide – approximately 200 million – are “socially disadvantaged, harassed or actively oppressed for their beliefs.” With over 2.3 billion Christians around the world, the study notes that Christians face the most persecution in the region of the world where Christianity first originated – the Middle East. 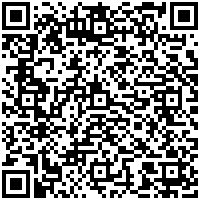