(JNi.media) Fashion is a business that must keep its ear close to the ground, to identify trends and capitalize on public whims. Which is why you can’t really blame the owners of a clothing store in the Nuseirat refugee camp in central Gaza Strip for posting mannequins in black balaclavas (the bank robber’s ski mask) and black-and-white checked keffiyehs over their faces. waving Palestinian flags in one hand and a knife in the other. The hat tip for discovering this new gem goes to Facebook user Mohammed Asad who took the first shot of the inspired display on Nov. 1, and to Israel Radio’s Arab affairs correspondent Gal Berger who ran with the story.

The combination of the store’s name glorifying the world’s most reviled anti-Semite with the most negative aspects of the Palestinian image, an image Palestinian officials are trying to erase—claiming those killed youths were non violent protesters, “executed” by Israeli security forces—depicts accurately the state of mind of today’s Palestinians, as only a fashion enterprise can do. 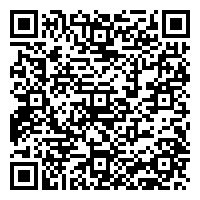